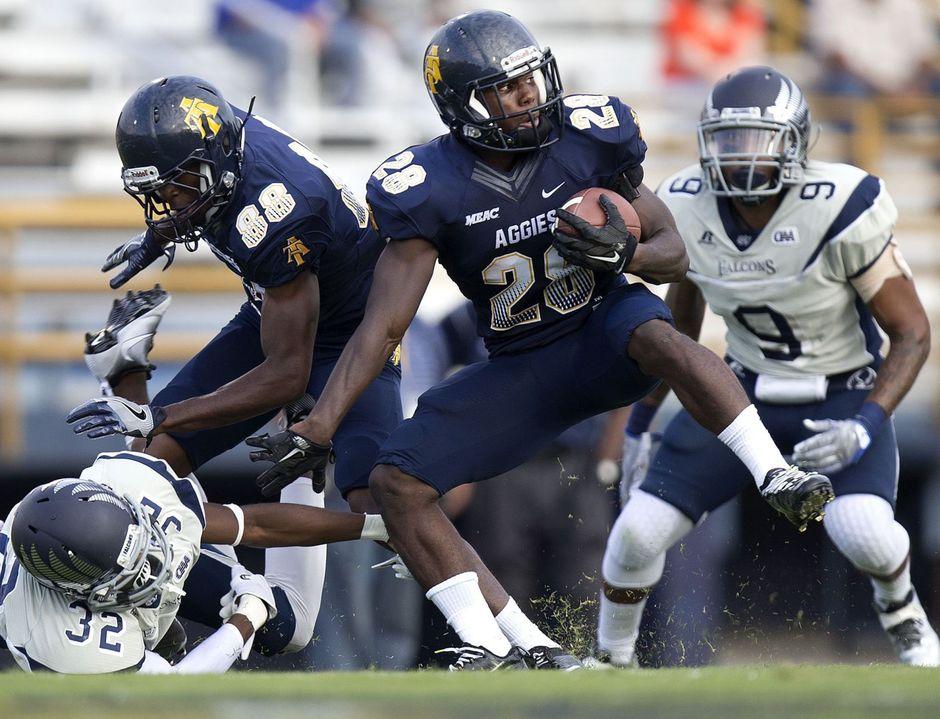 The 2015 Celebration Bowl champions, are back and better than ever as they slaughtered the

This is the first meeting between the two teams since 1935. The Aggies lead the series 2-0- 1.

The Falcons returned with 22 student-athletes from last year’s squad. Top returners on offense

The Aggies enter the season nationally ranked for the first time in more than a decade. The

Aggies are 25th in the NCAA FCS Coaches Poll and the STATS FCS Media Top 25 Poll. They

completing one of the best seasons in school history. In the inaugural Celebration Bowl, the

which was their first 10-win season in 12 years.

The Aggies’ finest point of the game was their passing ability. Sophomore starting quarterback,

Lamar Raynard, connected on 17 of his 21 passes for 170 yards and two touchdowns.

Sophomore backup, Kylil Carter, was 5-for- 7 for 70 yards and a touchdown while senior

the fourth straight time. In the 2015 season opener against SAU cross-town rivals, Shaw

University, the Aggies came away with a 61-7 win.

This was not only a memorable game for the Aggies but also for running back, Tarik Cohen,

who broke yet another school record. Cohen rushed for 44 yards and two touchdowns on eight

carries. His two touchdowns gave him 42 for his career, getting past Stoney Polite’s 41 for the

“I feel like I got enough touches,” said Cohen. “I had two touchdowns. I know the team wants to

have me for the rest of the season, so we don’t want any stupid injuries getting in the way of

In fact, the Falcons turned the ball over on each of their first two possessions. Junior Joshua

Patrick caused the first mishap by blitzing SAU quarterback Darryl Johnson from the outside.

Patrick rushed the passer unblocked, sacked Johnson, and forced the ball out of his hands.

through a huge hole to score the Aggies first touchdown.