Letter to Chancellor occurs for the second time 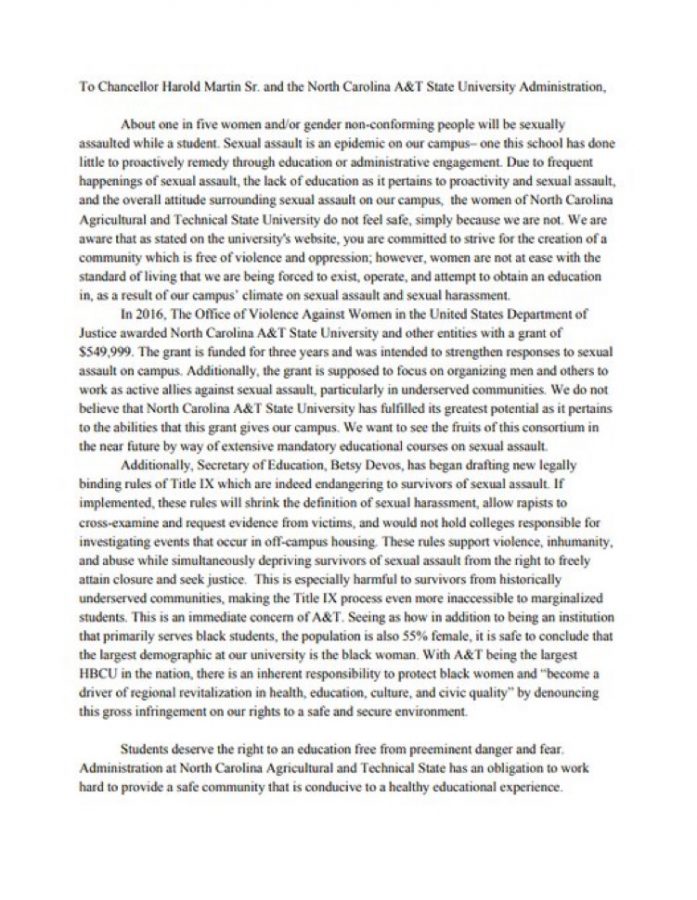 A letter regarding discussion of rape culture on N.C.A&T’s campus was addressed to Chancellor Harold Martin Sr. and the N.C.A&T Administration.

The seven demands are summarized below.

A public statement from the Chancellor and N.C.A&T that expresses ending sexual assault by diminishing issues within a greater system. (Misogyny, White Supremacy, Homophobic and Campus Police)
Report release on how $549,999 grant was used to combat sexual assault on N.C.A&T’s campus.
Commit to providing a safe living and learning community.
Implementation of mandatory courses on sexual assault taught by 18-25 year olds, which would include clear consent, prevention and mental and emotional trauma of survivors.
Creation of a task force that hold N.C.A&T responsible for lowering the amount of sexual assault cases.
Expansion of the mandatory Healthy Brothers Healthy Sisters program’s Consent module.
A public statement from the Chancellor and N.C. A&T clearly expressing opposition against DeVos’ proposals for Title IX.

It was intentional for the letter to be written anonymously to ensure that it would be read for its content and not diminished due to the author. However, sophomore political science student and SGA member, Kylah Guion decided to break her silence and admitted to writing the letter.

“In the past when I have tried to have conversations about sexual assault, it did not really go far. People do not care unless it is affecting them directly,” said Guion.

We sat down with the writer of the letter, Sophomore Political Science major and SGA member, Kylah Guion to get a clear understanding of the letter, its origin, and the aftermath of its release.

In 2017, Secretary of Education, Betsy Devos decided to make changes to the federal law of Title IX. Secretary DeVos’s changes would protect the accused from legal action when sexual assaults reports are addressed poorly.

This letter is a direct response to DeVos’s proposals as it would minimize the definition of sexual harassment, especially on college campuses.

While confronting these Title IX changes, the letter was addressed to the Chancellor and the campus’ responsibility to ensure students’ safety from sexual assault.

In 2016, The Office of Violence Against Women in the United States Department of Justice awarded N.C. A&T with a grant of over $500,000 for three years to strengthen responses to sexual assault of the campus, according to the letter.

Guion expressed campus did not meet the expectations of the grant and has not done their job of creating more opportunities to defend and protect students from sexual assault. She also believes more effort can be shown to create an open, inclusive conversation on what sexual assault looks like.

Within the letter, the lack of protection of transgender and non-binary students was also confronted.

Due to the contents of the letter, many students followed Guion’s lead and reposted it with the #NCAT. Guion has also received positive feedback from students who have shared their experienced as reason why the letter was needed.

“People needed to see it. So, posting it on my Twitter account as well as retweeting was to show this letter is something I support and stand behind,” said Myles Wilder, sophomore horticulture student.

“We’ve seen and read the letter written by an anonymous group of students on campus. SGA is working diligently to get the answers the student body is seeking.”

Since the release, there has been backlash, which contained arguments of the campus implementation of programs with purpose to educate the student body about these topics including Healthy Brothers and Sisters. However, many students stand with Guion on how ineffective these courses are.

“They [Administration] did not feel that classes about consent and trauma relating to victims needed to be mandatory,” said Guion.

Services like Aggie Escort are used to combat the issues of safety on campus. However, there are  services offered on other college campuses including UNCG, such as Sexual Assault Nurses (SAN), that are not implemented at N.C.A&T.  SAN provide a service that entails extensive training in terms of accompanying sexual assault survivors, which differs from the average nurse.

“We lack alternatives of SANs on our campus and even transportation to the nearest SAN,” said Guion.

With SAN, those who choose to be examined are allowed to do so without pressure of having to take action immediately, which would allow the survivors to have substantial evidence at anytime of their life.

Since the release of the letter, Guion has not yet met with the Chancellor. However, she has been in meetings with Administration to discuss the demands.

Guion and many other advocates strive to fix the difference of how these conversations occur nationally and throughout the HBCU community.

“Talking about sexual assault in the black community is different than how you would talk about it on the campus of University of North Carolina at Greensboro,” said Guion.

This has not been the first time a student or group has demanded the Chancellor to display opposition. September of 2017, a group named Concerned Student 1891 placed the same issues within their letter to the Chancellor. The N.C. A&T Administration has not officially addressed the disapproval of Secretary Devos changes or the letters of demands from Concerned Student 1891 or Guion.