Self Destructive Aggies Go Down Swinging 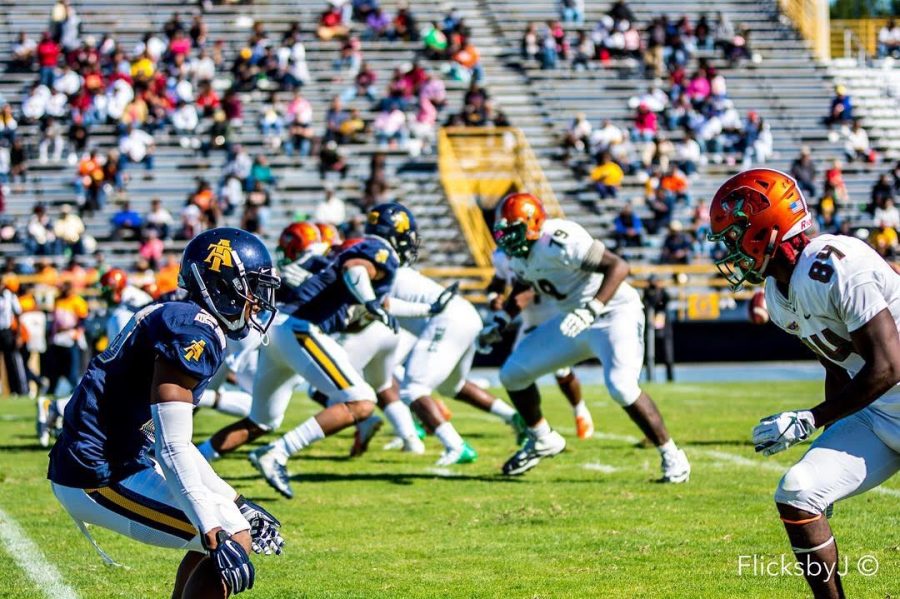 If you can win as a team, then you can easily lose as one when the Rattlers kicked a game winning field goal by kicker Yahia Aly to defeat the Aggies.

There were 2 different ball games played on Saturday afternoon. The first half, and the second. The game started for the Aggies just like they wanted, with senior wide out Malik Wilson returning the opening kickoff 100 yards.

In the first half the defense was dominating with Darryl Johnson Jr and Sam blue piling up sacks and even forcing an interception by senior cornerback, Timadre Abrams.

Momentum changed, a little, when Herman Jackson forces and recovers a Marquell Cartwright fumble for a 55-yard touchdown. Even after the blunder, the Aggies tacked on a score before the half to go ahead, 21-6

After quarterback Lamar Raynard and the offense scored 2 touchdowns in the first half, the offense was completely shut out in the 2nd half. The running game was nonexistent, racking up only 74 yards.

Down 15 points coming out of halftime the Rattlers responded with a lengthy touchdown drive to bridge the gap to within eight. Three drives later FAMU scores, again, with a Chad Hunter reception for an 11-yard touchdown.

In the 2nd half the Aggies’ defense was scorched on 3rd down as FAMU converted 8 out of 11 attempts. They also converted its one and only fourth down attempt.

Adjustments were obviously made on the FAMU sideline as the Aggies pass rush could not get ahold to FAMU quarterback, Kelly. The Aggies defense gave up over 300 yards through the air and a passing touchdown. FAMU had a whopping 20 first downs in the 2nd half.

On the Rattlers’ last drive of the game they found themselves trailing, by two, with 1:57 remaining. They needed to get well within field goal range for their kicker Yahia Aly. After FAMU gets to the Aggies’ 38-yard line, with only 21 seconds remaining, the Aggie defense were on the verge of sealing the deal. A huge 13-yard pass interference penalty and a 19-yard reception from Chad Hunter, set up the Rattlers nicely. FAMU gets the ball to the Aggies’ 9-yard line and, with four seconds remaining, Yahia Aly nails a 26-yard game winning field goal as time expires.

Penalties also destroyed A&T as they piled up 13 of them for 131 yards. Penalties have been a cancer to the team all season long

Although, there were some bright spots from Saturday’s game despite the loss for the Aggies. Raynard, becomes N.C. A&T’s all-time leader in passing touchdowns (62). Also, the play of Zachary Leslie catching 8 passes for 140 yards and 2 touchdowns gave the offense a pulse.

On the defensive side of the ball Darryl Johnson, Jr. sacked the quarterback twice and the defense, as a whole, made some big plays.

The Aggies look to bounce back next week as they go on the road to face Bethune Cookman University (4-3) before they host homecoming at BB&T Stadium November 3rd vs Norfolk State University (3-2).