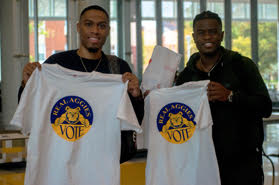 Many set high hopes for races on local and state levels in North Carolina, Georgia, Florida and Texas.

Youth – from ages 18-29 – have been criticized for being a small percentage of total voters in past elections. This year, however, youth have set out to change this through social media promotions, peer encouragement and self-education.

More than three million young voters voted early which is a 188 percent increase from 2014, according to The Atlantic.

Four of the six amendments on the ballot for North Carolinians were passed:

This election season has elected the most diverse candidates in history. The LA Times reported, there have been 117 women elected, naming this election a “pink wave.” Also, LGBTQ+ candidates and candidates of color have made history.

Some well-known candidates throughout the Nation include:

The governor race of Georgia of Brian Kemp and Stacey Abrams is still ongoing as Abrams has not conceded until “every vote is counted,” according to CBS News.

Where the majorities stand

In the Senate, 51 seats are needed for a claimed majority. Democrats hold 46 seats while Republicans hold 51.

Majority for governors is 26. Currently, Republicans have 25 and Democrats have 23 governors, according to WFMY News 2.

The U.S. House majority is 218. The Democrats have gained control with 221 seats.