The Execution Of Excellence 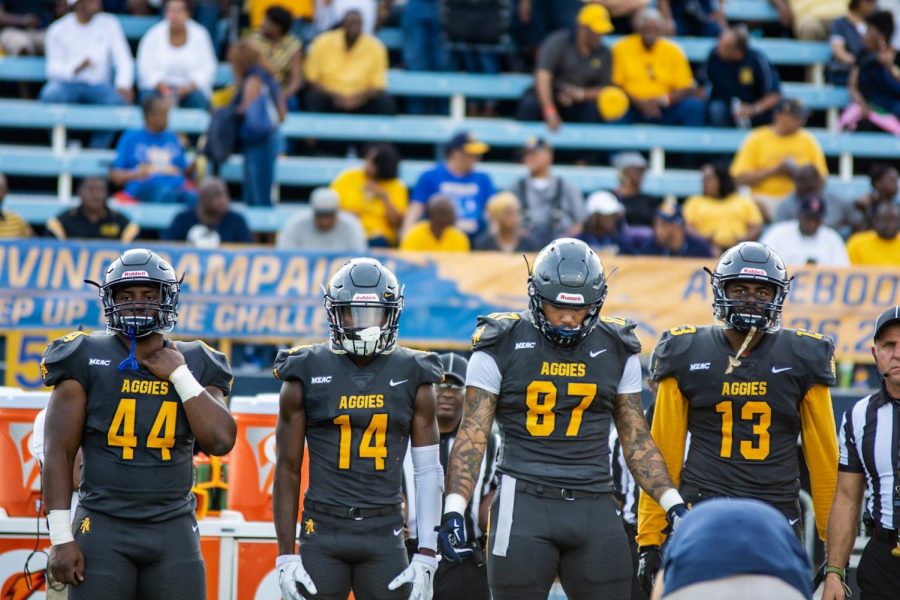 North Carolina A&T Athletics has done nothing shy of executing excellence and each program continues to uphold the popular phrase, “Aggies Do.”

Behind all-conference players Courteney Pitt and freshman Andrea Laboy-Rivera the N.C. A&T Volleyball team is on pace for its first winning season in 12 years.

The 6-foot-1 sophomore from Farmville, NC, Courteney Pitt, has enjoyed an impressive regular season with four games of 20+ kills, including a three-game streak of 20+ kills during the month of September.

Andrea Laboy-Rivera, who was dubbed all-rookie, has helped lead the Aggies to 1.8 service aces per set, which is sixth in the NCAA.

These incredible ladies aimed to lead the Aggies to a conference championship win, on yesterday November 18th, against Howard University, but was unable to overcome the Lady Bisons, losing 3-0.

Still, the N.C. A&T Volleyball team had a spectacular season, and each of the players are champions in the eyes of their coaches, peers, family, and Aggies nationwide.

Meanwhile, the Aggies bowling team is on fire this season as sophomore Ana Olaya collected her third career MEAC player of the week award on November 13. Olaya was the MEAC Rookie of the Year and the MEAC Tournament Most Outstanding Player.

The Aggies have finished third, fourth, and second at the Tulane Sugar Bowl Invitational, Mckendree Invitational, and the MEAC Conference Match #1 respectively.

The Aggies still have 11 tournaments before seasons’ end, but they are off to a fabulous start as they look to reclaim consecutive MEAC titles. Another title would be the Aggies’ sixth in program history.

Men’s golfer freshman, Diego Gonzalez, also made history as he is the first golfer in the program’s two-year existence to win a golf tournament. He shot six-under at the Maryland Eastern Shore Collegiate Golf Challenge.

Gonzalez joins junior Erica Jackson as the only golfers to win tournaments this season. Both student-athletes helped lead their teams to top 5 finishes in the SSU Tiger Fall Invitational with the men finishing in fifth and the women finishing in third.

The Men’s Cross Country team made history last month when they won their first MEAC title since 1983.

The Women’s Cross Country team has their own All-MEAC performer in junior G’Jasmyne Butler, who helped, recently, lead the team to a third-place finish in the 2018 MEAC Championship.

Butler along with juniors Kristoni Barnes and Camille Martin finished top 25 in time at number 13, 20, and 23, respectively, during the finals.

The football team sits at 9-2 after obliterating North Carolina Central, 45-0, which is the team’s third consecutive, Aggie/Eagle Classic win, and 50th win against its I-85 rivals. Saturday’s win, and after a third consecutive Florida A&M loss, sends N.C. A&T back to the Celebration Bowl for the third time in four years.

The wave of athletic excellence at North Carolina A&T has continued to dominate the Aggie landscape, as it did a season ago.