A seat at the table: how to handle hard conversations at dinner 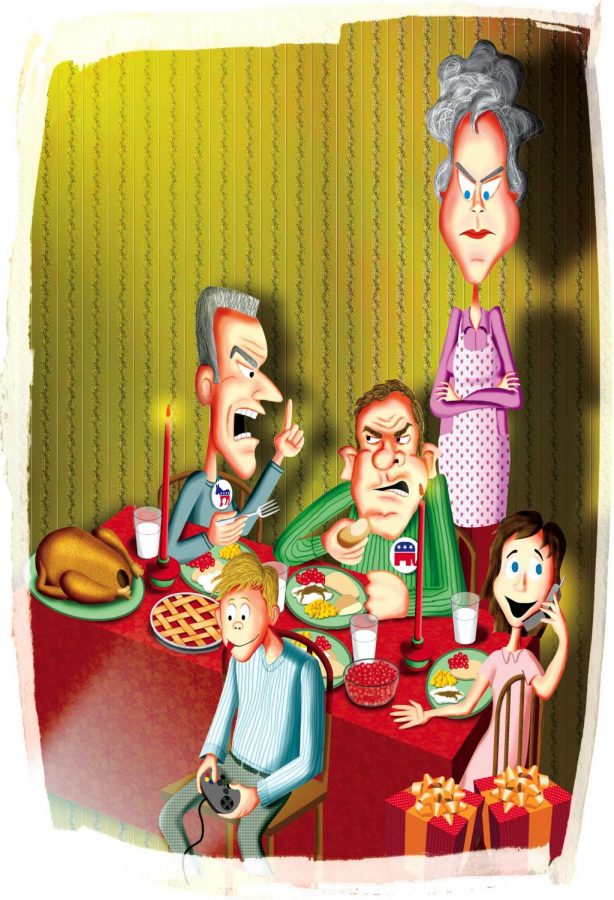 Thanksgiving is the time of year where we get to catch up with the favorite cousins and throw the plate away – face down – if the potato salad wasn’t up to par.

It is also that time of year where we sit around the table and have conversations centered around the family, current events, celebrity gossip and so on.

When these conversations tend to get uncomfortable, even the most beloved family members are exposed for their racism, homophobia or sexism. Someone always has an opinion about something controversial, and as we continue to mature and form our own perceptions of the world, it’s getting harder to keep our mouths shut.

If your family is even slightly dysfunctional, there is bound to be some dinner table drama. Here is a look at the topics that may come up this season and how you should defuse the pending arguments.
What’s up with Kanye?
In 2018, Kanye has made more headlines for his political stance than his music. He began by endorsing Donald Trump which got him unfollowed on social media by dozens of his famous acquaintances. He enraged black people everywhere when he called slavery a “choice” on TMZ,  and he has since apologized.

Shortly before he released his album “Ye” this past summer, Kanye admitted to being bipolar. The cover art for the album even had the phrase, “I hate being bi-polar, it’s awesome” scribbled on the center.

Kanye and his antics will surely come up during dinner time and the opinions will be harsh.

His latest outburst during a Saturday Night Live appearance will likely be dismissed as “Kanye being Kanye,” but a conversation should be had about how the black community tends to dismiss mental health disorders as being “crazy.”

Talking about mental health is now becoming normalized, but what do these conversations look like?

Older family members may think the best remedy for mental illness is prayer, but you cannot pray away a mental health issue. No matter how long people try to “leave it in God’s hands,” we need to accept that going to therapy or counseling sessions is not a sign of weakness.
Trump’s anti-LGBTQ policies
President Donald Trump and his executive orders will inevitably come up at some point, and his latest anti-LGBTQ proposals may be a topic of conversation.

Trump’s executive order would change Title IX interpretations of male or female by the genitalia an individual was born with, effectively erasing all protections for transgender people, according to CNN.

The transgender community has continuously fought to maintain their human rights despite bathroom laws and adopt policies that are sweeping through various states. Still, there’s always the Bible-thumping uncle that can not see past Leviticus to realize that.

The acceptance of gay and transgender individuals into black families has always made for an elephant-in-the-room situation, but it does not have to be that way. For cases like this one, you may choose to be quiet to keep the peace. However, a simple “I disagree” will let your family know where you stand.
The #MeToo movement
Whether it’s Bill Cosby, Terry Crews or any other celebrity whose name might pop up, the #MeToo movement and sexual violence might make their way to the table.

There have been far too many occurrences of men accused of assaulting, groping, harassing or raping women or other men, and the accused lives continue with little to no consequences. There are always questions of what the accuser was wearing, why it took them so long to speak out and if they did anything to entice the accused.

With Bill Cosby, a family member might question the number of women that accused him of rape and why it took so long for them to come out. For Terry Crews, they may wonder why he just didn’t just beat the guy up.

Any of the actions that fall under the umbrella of sexual violence makes the victim feel small as if they shouldn’t speak up, especially if the accused is someone of high esteem.

While an alarming number of black men and women have been victim to sexual violence, it’s important that victims have the courage to admit what they’ve gone through.