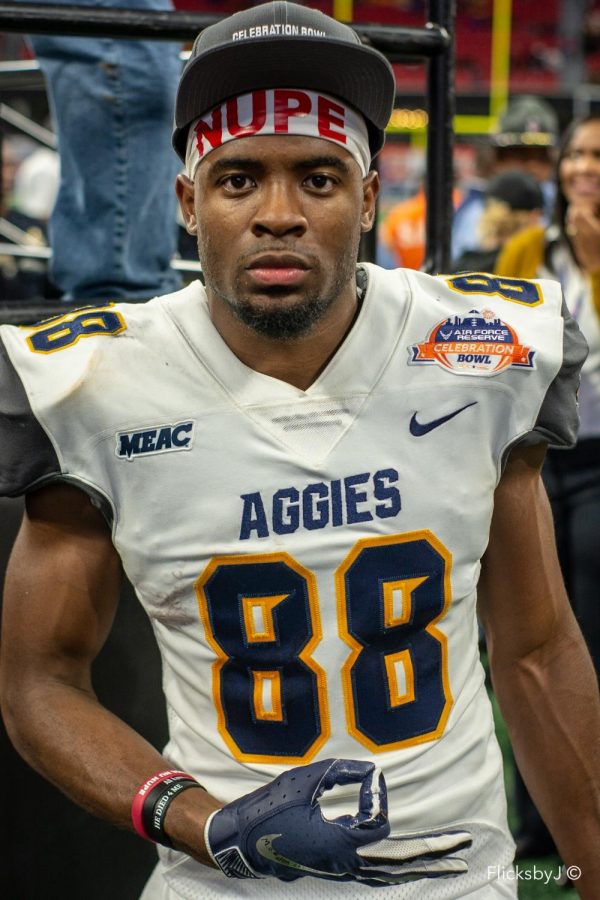 Electrifying, would be one word to describe the type of player Malik Wilson has been for N.C. A&T football team.

In Wilson’s career, he’s had 1,807 all-purpose yards and scored 12 total touchdowns. Eight of those touchdowns were receptions of 50 yards or more.

Wilson’s career as a student-athlete has now come to an end after graduating with a BA in Journalism and Mass Communications and playing in his final Celebration Bowl, but his talents will not go forgotten.

What made Wilson so electrifying was his ability to take the top off of the defense by getting behind the secondary, returning, and him being able to turn short gains into big ones with his agility and speed.

His career started in 2014 where he was redshirted. A season later in 2015, he was eligible to play and he played in all 12 games. Later that season N.C. A&T  played in their first Air Force Reserve Celebration Bowl against Alcorn State University. The attendance was recorded as the highest in history with more than 35,000 attendees; N.C. A&T won that game 41-34.

“Going into it, we didn’t know what to expect. We were just happy that we got to continue our season. It was a fun game and it was even better that we won,” said Wilson.

A season later, the Aggies had an overall record of 9-3 and did not make it to the Celebration Bowl due to its defeat at the hands of rival North Carolina Central, 42-21.

However, the Aggies went on to the FCS playoffs but were put out early by the Richmond Spiders, 39-10.

Moving forward to the 2017 season when the Aggies went undefeated, Wilson continued to establish his talents with the team; he continuously impressed N.C. A&T all season by catching four touchdown pas

The Aggies proceeded to have a great season in 2017 leading them to another Celebration Bowl where they faced off against the defending 2016 Celebration Bowl Champions, Grambling State University. 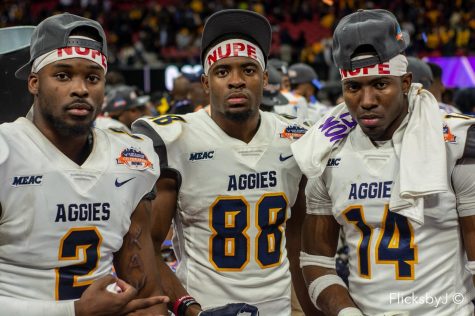 “Last year was very special because we were the first team in the MEAC to ever go undefeated. That season raised the eyebrows of people who didn’t know about A&T,” said Wilson.

Coming into the 2018 football season, the Aggies were challenged early with matchups against one of the top teams in the FCS, Jacksonville State University and an FBS team in East Carolina University. The Aggies defied the odds and managed to pull out two huge victories.

After losing two games in the season, one to Morgan State University and another to Florida A&M University, many doubted if N.C. A&T would make another appearance at the Celebration Bowl.

“We lost two games that we shouldn’t have, but by the grace of God we got back to the big game,” said Wilson.

“Whenever my number was called I always tried to make a play,” said Wilson.

The 2018 Celebration Bowl was a rematch of N.C. A&T and Alcorn State.

The game started off fast for the Aggies but in the third quarter, the Aggies lost momentum after a long touchdown run by Braves’ quarterback Noah Johnson.

Malik Wilson, with his eyes on the prize, returned the next kickoff for 79-yards. That was the play of the game and the Aggies were victorious over the Braves, again, 24-22.

North Carolina A&T State University and NCAT Football… Thank you for everything, I am truly indebted to this program and I will always and forever have #AggiePride! #Ring7 #LLD💜 #88checkingout pic.twitter.com/rYLkxwzcn9

“We hit a brick wall and Alcorn came out after halftime and scored 10 unanswered points. We were up still but if we didn’t make something shake then, we might have loss,” said Wilson.

In the future, he looks to continue his career as a football player, on the professional level and will be training in Charlotte to lead up to next year’s Pro Day.