Sorry for the inconvenience: the government shutdown 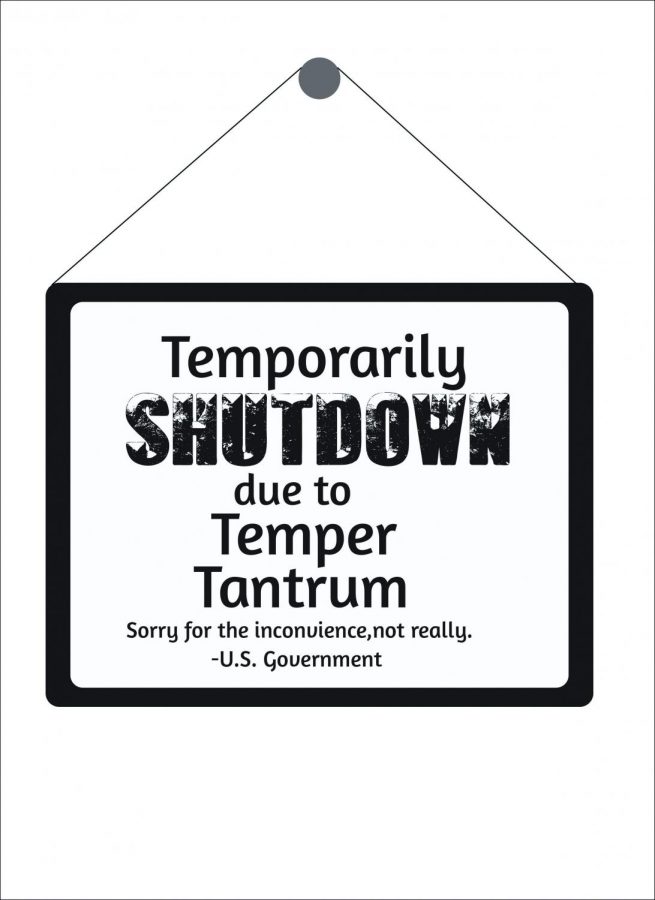 Thirty-five days, two paychecks, and an estimated 11 billion dollar hit to the economy. The five-week government shutdown of the Trump administration is the longest in history, and although the government has reopened, the nationwide impact continues and the threat of another shutdown looms.

A Government Shutdown occurs when nonessential government offices can’t afford to stay open. The shutdown remains until the parties can reach an agreement and a budget bill is then passed. The shutdown hurts many businesses with a lack of funding.

On Friday, January 25, federal employees returned to work after five weeks of receiving no paychecks. This shutdown took place as a result of a disagreement between President Trump and Congress in regards to the funding for his campaign promise: the U.S.-Mexico border wall.

President Trump wanted 5.7 billion dollars to fund his wall for what he calls a “crisis” in Mexico. The word has been thrown around a lot, but in reality, the border is not as big of a crisis as he may have the American people believe. The real crisis was the economic, social, and emotional damage this shutdown has caused Americans who are just a few weeks away from possibly going through this again.

I just had a furloughed worker come visit me in my office.

“I work for HUD,” he said. “My family is hurting now that I’m three weeks without a paycheck,”

“but please – please don’t give into a wall. I don’t want the political tool of withholding my paycheck to be legitimized.”

Around 800,000 government workers were either at home waiting and wondering when the government would reopen or being forced to work without pay. Unfortunately, the majority of Americans live paycheck to paycheck so this caused financial distress to a number of other businesses, employees, families and students like the ones that attend North Carolina A&T.

Even though many federal workers receive back-pay for the checks that were missed, they continued to figure out how to make ends meet in the meantime. Many restaurants, grocery stores and food pantries generously provided furloughed workers with food during the shutdown, but more than just government employees were affected.

Even with the end to the government shutdown, the impacts from going weeks without pay still linger. https://t.co/xoflCEXgNx

Many businesses rely heavily on government employee spending. Restaurants line street after street in D.C. and know that they will see plenty of business Monday through Friday from lunches, office birthdays and morning coffees. For five weeks, these businesses didn’t have the same amount of income.

Other businesses rely on government agency spending. National Capital Flag is a small company in Alexandria, VA that manufactures and resells flags and accessories. Their biggest customer is the federal government. Jermaine Dunk, 44, Office Manager of National Capital Flag, discusses the impact of the shutdown on their company who receives between 85 and 90 percent of their business from the government.

“Sales will take a tremendous hit [for the remainder of the year] due to the loss of revenue at the top of the year. We had to lay off six people. The remaining people will be impacted as we function now with a smaller staff”, Dunk says. “[I think] everybody in this area relies on every dime that they bring in.”

There have been other Government Shutdowns in the past inflicted by past U.S. Presidents. The previous record for the longest shutdown was 21 days under the Clinton Administration. The most recent was over Obamacare which after 16 days of disagreements the government made changes to the income verification requirements while also extending the debt limit.

We understand the impact on individuals with the “good government jobs”, but many of you may be wondering how does this affect you.

Thankfully, the impact on federal financial aid was not excessive, but individuals who were in need of tax return transcripts were not able to have any action taken on fulfilling those requests until the government reopened. Should another shutdown occur, these processes could be halted again. To contact federal student aid with any questions, you can call 1-800-4-FED-AID (1-800-433-3243). A&T financial aid has worked with students experiencing difficulties in regards to the shutdown given that they meet certain requirements and qualifications.

There is definitely a lesson to be gained through this shutdown about the importance of saving money. Upon graduation, students will be making larger sums of money and must understand the importance of setting some aside for emergencies such as this. The government shutdown did not only affect federal employees as stated in this article. It does not even only affect people in D.C. as there are government agencies and companies that are impacted by government agencies across the nation.

As a final note, yes you still need to file your taxes!