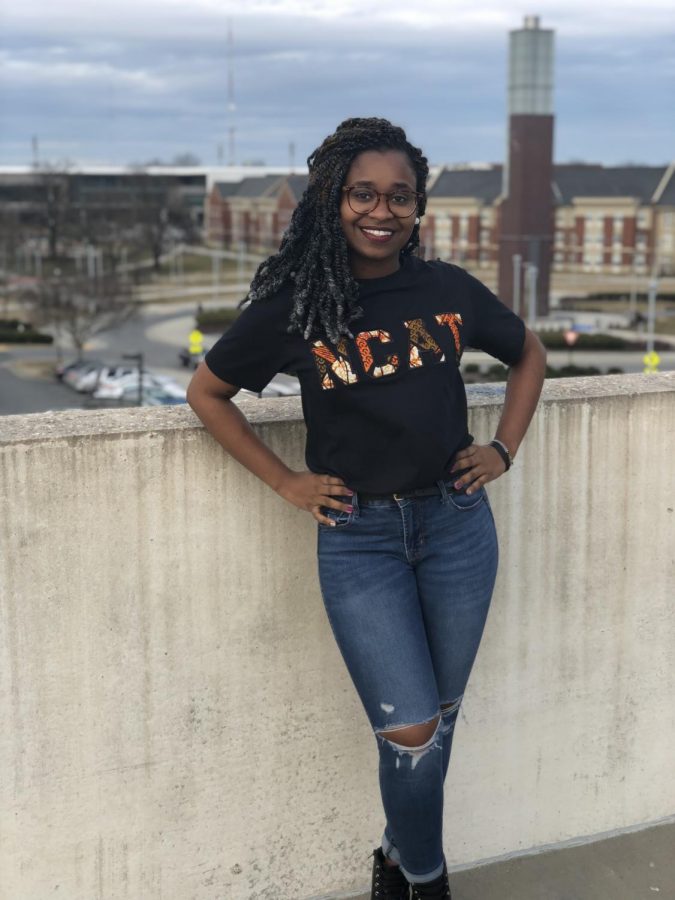 All over campus students have been showing off their “NCAT” t-shirts that feature African print as a way to connect students to their culture. The person behind those stylish shirts is none other than junior criminal justice student, Kendryck Spears.

Spears has a business, known as Africana Apparel, where she takes African print and incorporates it into the lettering on t-shirts.

“ I had the idea around December and I presented the idea to my mom, who has her own embroidery business. She was like ‘this is a great idea! Let’s develop this idea and run with it,’. ” Spears explains.

From then on she began creating ideas and searching for the right fabrics to bring her image to life.

The African print that is seen on her t-shirt was inspired by an African skirt she received for her 16th birthday. She loved the fabric so much that she began to wear headwraps and eventually realized that it would be unique to incorporate similar fabric on to a t-shirt.

Her designs have received the attention from A&T students, and even caught the eye of @ncat.shaderoom on Instagram, as she was recognized for their weekly “Money Making Monday’s” a day where they highlight a student business on campus.

🚨Today for Money Making Monday We Spotlight @queenkendryck 🚨 Who Specializes In HBCU Apparel Get Yours Today! Let’s Support Our Fellow Aggie 🐶💙✨

Spears plans to expand her brand and eventually reach schools beyond A&T and HBCUs.

“People that go to PWIs don’t have the opportunity to go to an HBCU. You should still be able to broadcast your schools in African print. For example, my sister goes to a PWI, and she is still very Afrocentric, so I want to give her and people at other PWIs the same opportunity,” Spears says.

Spears is also working on creating more clothing options for students to purchase in the future.

“Right now my mom and I are developing the idea of working with either beanies or hats, and taking the same concept and putting on there, and definitely going into long sleeves and sweat jackets and stuff like that,” she explains.

Spears is very grateful for the encouragement and feedback that she has received from the students at A&T.

“It’s really nice that I have the opportunity to start my own business. Everybody on campus really supports the idea of entrepreneurship, so it’s really great.”

Spears encourages aspiring entrepreneurs to take a chance because you never know the impact you’ll have until you try.

Spears has an Etsy page where her t-shirts can be purchased, but students can also directly contact her if they are interested in purchasing a shirt, as she does keep some with her on campus. Her t-shirts start at $20.