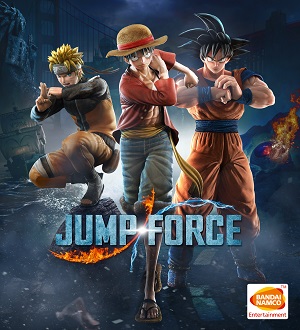 With Weekly Shonen Jump reaching its 50th year anniversary last year, Jump Force is a game that is curated to honor the many different characters that have come from manga and anime series.

This game consists of many well-known characters from the Shonen Jump anime/manga such as Monkey D. Luffy, Goku, Naruto, Yusuke Urameshi and many more different characters.

According to IGN.com, Jump Force currently consists of 40 different characters from 16 different anime/manga series. Players of the game are able to create their own, three-character manga/anime tag team in order to beat their opponent.

Four original characters have been created for Jump Force and are relevant in the storyline. The characters consist of Glover (director), Navigator, Galena (villain) and Kane (villain).

These four characters were created by the legendary Akira Toriyama, who is well-known for his work in the Dr. Slump and Dragon Ball manga series.

The game features an interactive story that allows you to create your own character and battle against evil forces that are attempting to alter humanity.

In order to eliminate the evil forces known as “Venoms”, a team is assembled consisting of anime/manga characters called the Jump Force.

While fighting across different settings and backgrounds, the detail and graphics for the game are stunning. Jump Force has been acknowledged and admired by fans and professionals for its combo-style gameplay and detailed arena battles. According to Heavy.com, Jump Force looks to be an anime fan’s dream.

The settings for the game also include real-world and fictional locations such as:
Times Square in New York City

The Matterhorn in the Alps

Valley of the End (Naruto)

Currently, the game features characters from the anime/manga series of:

Fist of the North Star

According to Gamerant.com, It appears that the first Jump Force DLC character pack will be released in May. This character pack will consist of 9 characters that have yet to be officially released. Anime/manga fans have already made recommendations on who they would like featured in the upcoming character pack. Characters such as Seto Kaiba (Yu-Gi-Oh), Hiei (Yu Yu Hakusho), Madara Uchiha (Naruto) and Gohan (Dragon Ball Z) have been recommended by fans.

Jump Force released February 15, 2019, and is available on PlayStation 4, Xbox One, and PC. The game is currently available for purchase at GameStop, Walmart, Target, and Steam. For more information on Jump Force, you can visit IGN.com and resource information for the game.