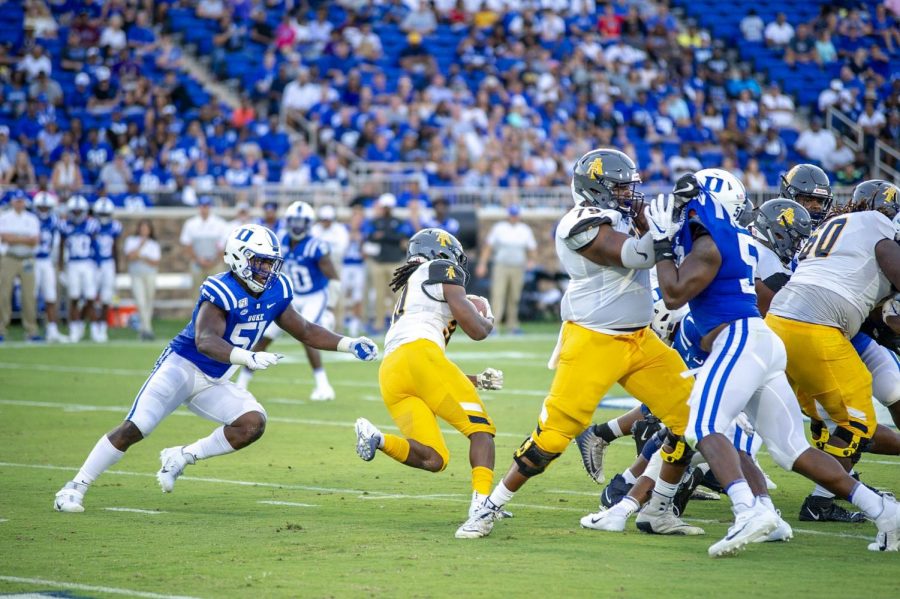 The N.C. A&T Aggies were looking to keep the momentum from last week’s win going as the football team played against the Duke Blue Devils on Saturday, Sept. 7, 2019 at Wallace Wade Stadium.

It started well for the Aggies as they held the Blue Devils to just seven points in what looked to be a defensive game, as the score at the end of the first quarter was 7-3 in favor of Duke.

Runningback Jah-Maine Martin, a redshirt senior, was able to change the tide for N.C. A&T, as he broke free for a 65-yard run that put the Aggies up 10-7 midway through the second quarter.

After that, the game was all Blue Devils.

Duke outscored the Aggies 38-3, which included three touchdowns in the last 3:13 of the first half.

Duke’s quarterback Quentin Harris, senior, had himself a huge game through the air this week after only to getting only 97 yards in Duke’s 42-3 loss against the Alabama Crimson Tide.

He completed 30-42 for 345 yards and four touchdowns, and he rushed 85 yards and scored a rushing touchdown.

Duke redeems themselves in this 45-13 victory, while the N.C. A&T team looks forward to shaking this loss off as they prepare to take on Charleston Southern next week.