Gilmore Administration highlights goals during State of the Campus Address 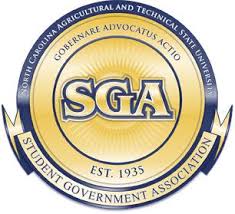 While expounding upon academic affairs they noted students expressed concerns with the attendance policy, issues within academic departments and accuracy in blackboard evaluations.

Both Mister and Miss N.C.A&T, Armani May and Diamond Mangrum discussed their commitment to the overall health and wellness of the student body. Mangrum focused on physical health and May focused on mental health.

The pair also mentioned their upcoming initiatives including:

Study Blitz with The Royal Court where students can interact with the Court while as they study and receive tutoring
Mentoring programs such as AGGIE MEN and May’s service project “Gentlemen’s Academy” at Gillespie Park Elementary School
Community service starting in this community around campus as well as an upcoming Bahamas relief drive for victims of Hurricane Dorian.

“As advocates of the student body we really want to make sure that you all are included in every process of change,” Gilmore said.

Through several platforms, the administration wants to ensure student voices are being heard within every arising issue.

One way SGA has encouraged student inclusivity is by collecting student data through surveys. A few weeks ago, the Dining Survey was released to students, and collected over 1,000 responses. With this survey, SGA has been able to extend the hours of operations in McCalister’s and SimplyToGo as well as add a breakfast option on the SimplyToGo menu.

More surveys are planned to be conducted throughout the year, including Academic Affairs, student concerns on safety and recycling.

“When we present to administration, to be able to show them real numbers, that’s when they listen a lot more,” Gilmore said.

SGA hopes to encourage smaller organizations to advocate for themselves when it comes to partnerships with SGA.

“In the past, because SGA is such a large entity, when smaller organization decided to partner with us, their events became SGA events,” Gilmore said.

In the future, SGA will be partnering with organizations including fraternities and Men on the Move to discover and highlight male leadership on campus.

By allowing organizations to share their knowledge with SGA, the Gilmore Administration hopes to foster better relationships with other on-campus organizations.

SGA is also working on creating university committees, such as the Parking Advisory Board, a new housing committee and Student Food Advisory Board. These committees permit the creation of focus groups in order to include student, faculty and staff input.

This year SGA’s goal is to obtain 15 percent of registered voters during on campus voting in the primary election.

Through showing STEM students how public policy can affect them, the Political Action Committee hopes to see a significant rise in STEM voter turnout.

“We really want to focus on our STEM students. When we look at our numbers STEM students’ numbers are not where we’d like them to be,” said Caldwell.

In preparation for the 2020 election, a new online voter guide will be released and on-campus voter registration events incorporated during fall and spring political action weeks.

On Oct. 1, which is during the fall Political Action Week, shuttles will be available to the Board of Elections. At this destination, students will be included in vote relating to an on-campus early voting station. Students have voiced their concerns about this matter due to the next election’s scheduled voting time taking place during N.C. A&T’s spring break .

Transparency within SGA is being emphasized and expressed through accountability. SGA is now allowing students access to meeting minutes, holding executive board meetings and office hours.

SGA is also planning to hold the senior administration accountable through ensuring the  Board of Trustees meeting minutes and materials are more accessible.

Student forums will also be held to address and recognize concerns and questions to faculty, staff and administration.

The first Chancellor’s Forum will be held on Oct. 10 at 6 pm in Deese Ballroom. During this session, students can propose questions  to Chancellor Harold L. Martin Sr.

The State of the Campus Address ended with questions and suggestions including:

Showcase of student art around campus
Diversity at the Career Fair
Sustainability of Aggie Source- the possibility of it being added to tuition and fees
The future of the Dome, which is currently being used for Athletics and Kinesiology

More details on matters discussed during the State of  the Campus Address, or a comprehensive list of the subjects covered during the address can be obtained from SGA.