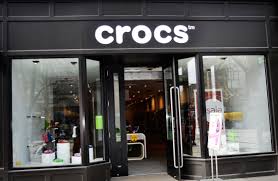 Kanye West’s Yeezy Foam Runners were officially announced on The Face Magazine instagram giving us a full view of the new shoes that were seen earlier in June on West’s daughter, North West.

The futuristic rubber clog-like shoes made a huge impression on Twitter users. Where they were compared to the popular brand Crocs which distributes foam like clogs.

“Kanye really made Yeezy crocs. The Yocs.” One person commented on twitter while showing an up close picture of the new shoes.

Yeezy foam runners mimic the style of its Yeezy Boost 700, with a lighter material and breathable holes. Sadly, this design reminded people of Crocs.

While Crocs may not be the most stylish pair of shoes, they are popular in the South where people wear them everywhere. Especially on college campuses where students often wear them to class.

Joy McLeod, junior human nutrition student commented “One thing about crocs I love is that I can slip them on and be comfortable and it doesn’t look horrible with a pair of jeans and sweats.”

The style of the shoes is what most people are criticizing. It is being compared to the fruit bags you see oranges in the supermarket.

But because it comes from Kanye West people will buy anything he sells.

Jalyn Thomas, senior speech pathology student said Kanye is a master at playing the fashion industry. He understood that his name carries value.”

In February 2015 West announced his collaboration with Adidas, called Yeezy Season one, where it gained and received positive reviews and Yeezy Season two was later announced in September 2015.

The collaborative fashion line has gained a following from sneaker heads, hype beast, fashion forward influencer, but most importantly West’s fan base.

When his clothing was debuted it was seen as bland and boring in the fashion world.

But that did not stop people from buying this relaxed street wear.

“The foam runners are just another example of lack luster product that will sell out off of the shelves in minutes” Thomas said.

There is a huge possibility that people who never owned a pair of Crocs will buy the foam runners when they drop.

“No, I would not buy them because I feel like it would never be as affordable as Crocs are now,” McLeood said.

The shoes are “fashionable” to people and many would not be caught dead in Crocs, but maybe West is trying to change that mentality but adding his own twist on comfort.

The new shoes are set to release in early 2020.

From the Yeezy Mafia twitter page when a user asked about pricing it was noted that the shoes would be affordable.

But from past releases of Yeezy Boots shoes can cost anywhere from $120 to $1,000 plus. Compared to their competitors Crocs whose footwear can go as little as $19.99.

“I personally would not buy them even if the price was right. But I guarantee you’ll see them on many people’s feet within the next few months. That’s just how the market works,” Thomas stated.