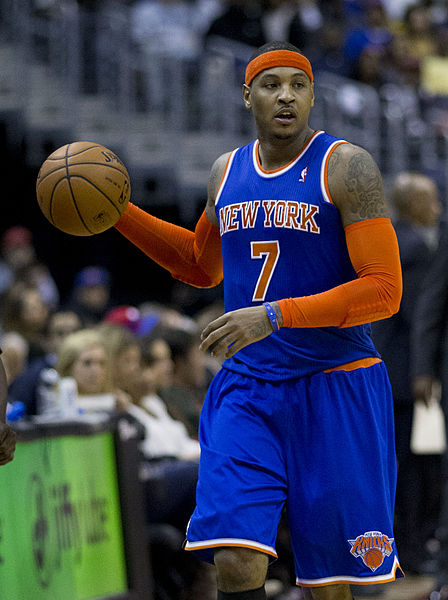 BIG 3 MVP Joe Johnson is returning to the NBA for his 18th season after agreeing to a one-year contract with the Detroit Pistons.

This has many players wondering why ten-time All-Star, Carmelo Anthony, hasn’t got signed yet.

Even though Joe Johnson played well in the Big 3, Johnson did not play in the league last year while Anthony played in 10 games for the Houston Rockets.

Anthony is clearly being blackballed.

In the past, blackballing was a form of punishment for an athlete. Many athletes such as Colin Kaepernick, Eric Reid, Mahmoud Abdul-Rauf, John Carlos and Tommie Smith were blackballed because they displayed their political and social stances.

Back in 1968, John Carlos and Tommie Smith had their Olympic careers ruined for raising their fists on the Olympic podium as a salute to black power.

Similarly, in 1996, the NBA suspended Mahmoud Abdul-Rauf during the prime of his career because he refused to stand for the national anthem.

Today in the NFL, Kaepernick and Reid are continuously being blackballed by the NFL for taking a knee during the national anthem to protest social injustice.

In Kaepernick’s last season, he ranked 23rd out of 30 qualified passers in quarterback rating per Neil Greenberg of The Washington Post. He is more than capable of being a backup on a good team yet he hasn’t been on an NFL roster since his last appearance in 2016.

Meanwhile, Reid is signed to the Carolina Panthers but has been subjected to multiple “random” drug tests since being on the roster. This includes three this year beginning on March 13th, per Stephen A Crockett Jr. of theroot.com

Seeing athletes join the blacklist for their political stance isn’t new, but the criteria for blackballing might have expanded for athletes.

Anthony hasn’t taken a larger political stance than any of the aforementioned athletes. Which still leaves the question of why are teams ignoring the former all-star despite being better than half of the league’s current players?

It seemed irrational that Anthony was being blackballed until Johnson got signed.

According to ESPN’s Rachel Nichols, NBA players sent her text messages to her stating, “what about ‘Melo’” after Johnson agreed to his contract with the Pistons, per a transcript from Clutchpoints’ Ashis Mathur.

NBA organizations seemed to have blackballed Anthony because he was averse to having a role on a team’s bench despite starting from there in his rookie season dating back to 2003 with the Denver Nuggets.

“All of us here that played the game at the highest level know how good Melo is, and we know that there’s no way that the Lakers would go out and sign Jared Dudley and not sign Carmelo Anthony.” Big 3 player Royce White said.

The controversy surrounding his name is the only reason Carmelo Anthony isn’t signed yet. No organization wants to face the backlash of losing games while having a future Hall of Famer on the bench.

In the modern era it appears that any form of controversy associated with a player’s name can lead to them being blackballed.