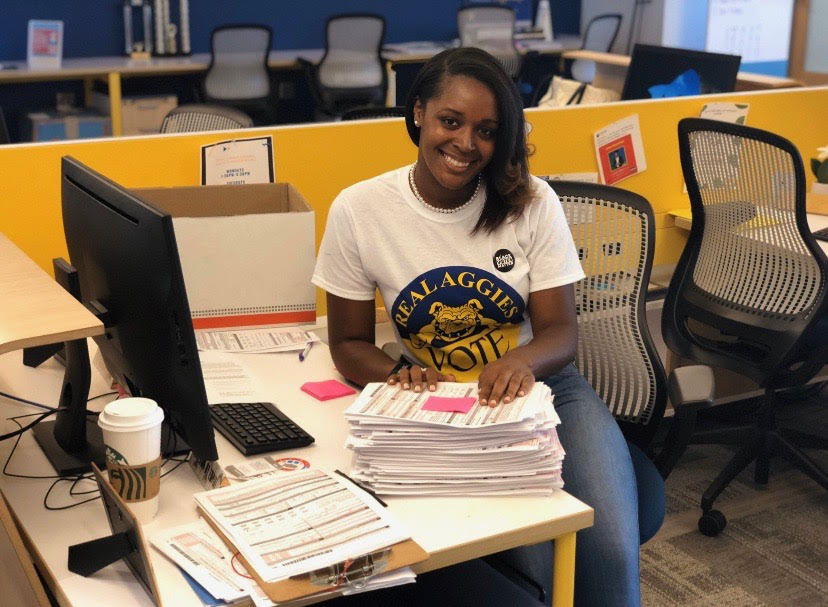 With her experiences and family history in politics and advocacy, she decided to continue the legacy of making a difference.

But even as Greensboro native, Brenda did not always want to continue that legacy at N.C. A&T.

“My grandpa was the band director here for like 30 years. My grandma taught here; both of my parents went here. So, I wanted something different,” Caldwell said.

She applied to Spelman, Howard and N.C. A&T. She got into all three, but soon realized how expensive those colleges were.

After receiving the Dowdy scholarship at N.C. A&T, she made the decision to become an Aggie.

Last year, she worked under a judicial council as attorney general. There, she got to see the inner workings of the position and how she could really advocate for students.

“It’s easy for administration to dismiss students because they’ve been charged with something and considered a ‘bad kid’. But you can be in those hearings and be like, ‘you know, we’re students, we make mistakes’,” she said.

Caldwell posted a picture on social media that celebrated 50 new students that she helped register to vote.

She discussed a little bit of her history when explaining why voting and advocacy were so important to her.

“My grandparents were students at North Carolina Central during the sit-in movement. So as soon as it happened at A&T it happened at Central too. So, growing up and looking at those pictures of them, they’ve always been advocates for people of color and black people in Greensboro,” she said. “I feel like it was already in my blood to already do the same.”

20 percent of young people said they don’t think they know enough to be able to vote, according to npr.org

Helping students register to vote has impacted her because she able to talk to students who generally, do not care about voting or politics.

“They don’t think their vote matters,” she said.

She also spoke about the efforts to suppress student votes.

“When I saw how determined they were to suppress our votes, I was like, you know, I have to do something to stop that on the largest HBCU campus. It’s a big deal,” she said.

Caldwell’s proudest accomplishment was registering 415 students to vote within a month of school starting.

“I’m most proud of that because it’s not in my job description as attorney general to do these things, but I’m able to use that platform to advance, you know, something that’s really important to me,” she said.

Caldwell’s dedication does not go unnoticed. Students recognize and appreciate it.

When asked about her future plans and goals as attorney general and as a student, Caldwell said she wants to go to law school.

“I think I’m going to do corporate law for a little bit and then maybe move to in house counsel,” she said.

She also wants 15% of registered voters, on campus, to vote in the fall.

Caldwell was also transparent when talking about being a black woman in politics.

“It’s hard because you don’t see a lot of black women in those careers,” she said.

She talked about a time her former black boss admitted that there was a minimal number of black women working in policy in D.C.

She wants people to know that she is passionate about reaching out to all students and getting them involved. Even if you don’t want to vote, she still wants to reach out.

“I want to show students that voting is not the only way to make a change. It’s one tool in the toolbox, but you can do things outside of that,” she said.