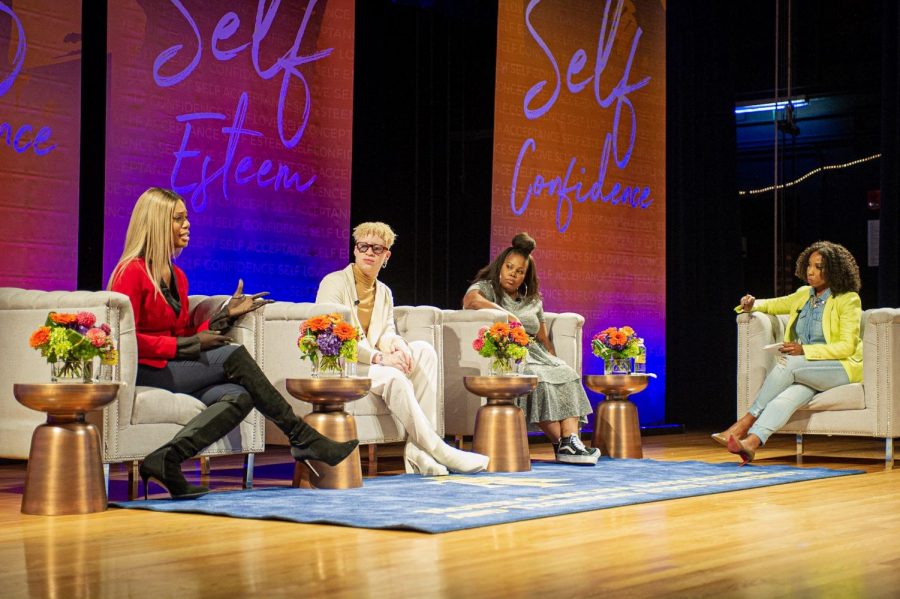 Cox, Ross and Riley discuss the process and principles of self-love.

The event began with a short anecdote from Chancellor Martin about his own battle with self-love. He spoke about how he used to be called names for his fair skin complexion.

Following his story, he explained the gifts: a small bottle of lavender oil, a journal, massager and a mirror. These items were provided to the audience were for when they feel like they are in need of self-love.

The conversation started by Dr. Johnson-Wayne asking, “From the earliest stages of our childhoods we get messages from our families, friends, school, and others about who we are and where we fit in in the world. How did those early experiences shape how you saw yourself?”

Cox answered by discussing her childhood in Mobile, Alabama. She talked about how she was called names because of the way she carried herself when she was younger. Although she was often called names, she realized that she was also “a talented kid,” Cox said.

Riley followed by recognizing labels did not start to be upon her until she entered the entertainment industry. “I didn’t know I was plus-sized. I honestly just thought  I was just like an average girl, you know, that just looked average,” Riley said.

The conversation continued with a dialogue centered around living in one’s truth.

Ross shared his experience of coming out as gay at 10 years old.

Cox included her story surrounding the struggle to receive money to complete her procedure in order to physically transition from male to female.

She explained to the audience she kept herself motivated by thinking, “I gotta figure out how to like this.”

The panelists ended the event by sharing their current destinations in their self-love journey.

“My favorite take away was to do what’s best for you at the end of the day. You hold the key to your happiness,’” said Amber Strong, a freshman psychology student.