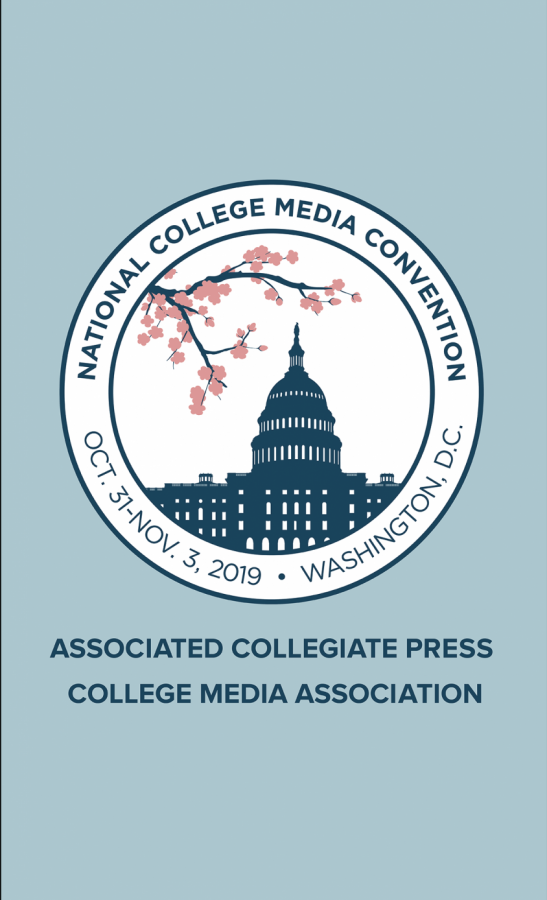 From Oct. 30-Nov. 3 2019, eight staff members of The A&T Register took a trip to Washington, D.C. for the Fall National College Media Convention.

College students and advisers seeking advice and tips about student-produced media were in attendance.

During the duration of the convention, there were more than 275 sessions presented. Other highlights of the convention included ACP’s Pacemaker Awards and CMA’s Pinnacle Awards programs, critiques for college media publications and a film festival competition.

Take a look into their journey and how students have learned from their experience at the convention:

The A&T Register’s adviser Emily Harris and I presented a session called, “Going Fully Digital,” on the second day of the conference, where we discussed the recipe for success when it comes to making the switch from a weekly publication to a digital media platform.

Sharing the experiences we faced as a staff to others going through similar situations was relief in knowing our struggles are valid. Students representing universities all over the country turned to us for advice in planning, executing and succeeding in the digital transition, and it felt amazing.

Besides being able to share my perspective of the digital shift, I established my public speaking skills even further, which is an accomplishment for me.

Outside of the sessions, I explored Washington, D.C. with former editor-in-chief Alexis Wray and the Poynter Institute’s Elissa Yancey. We were able to find an authentic-as-they-get Chinese spot, where they made fresh noodles and one could buy live fish. The vegetable dumplings were amazing.

Overall, I was inspired to take a closer look at the ways in which my newsroom operates. I’ve come to realize there are several ways we can improve how we work by eliminating the rituals we keep that no longer bring us joy. I believe there are ways to produce quality content without having to enforce the policies inherited to me as the editor; tradition does not necessarily mean efficiency.

Washington, D.C. is always a great place to be. I believe it is the best place to be when inspired by the power of journalism.

After a visit to the Newseum, I am reaffirmed in the reason why I chose this as my field of interest.

The first day of the convention was extremely beneficial to my inspiration and creative mindset. It was through the, “Tidy Up Your Newsroom, Marie-Kondo-Style … and Spark Joy In The Process!” session that allowed me to find new methods to manage our newsroom. I became very excited when the speakers and other attendees offered solutions to several issues. This session made my colleagues and I feel less alone as managers.

The other session I attended, which was “Generating creative ideas,” prompted me to brainstorm new concepts for storytelling. I was even enlightened when we diverted into groups and brainstormed a topic. Our topic was on garbage, and how colleges/universities and communities use recycling and trash removing procedures.

I also took a personal venture and attended an invitation-only fall training and networking event hosted by POLITICO. The event lasted from 10 a.m. to 3 p.m. and featured Tiffany Cross, who is the Co-founder and Managing Editor of The Beat DC. Cross provided tips and conversation starters of covering the 2020 campaigning. The attendees were also given time to network and create/develop our pitch for our applications for the POLITICO Journalism Institute.

After attending this event, we visited the National Museum of African American History and Culture. I have been waiting to step foot in this museum for years, and it was breathtaking. I was so pleased with the display of the culture and information provided.

My sessions were very beneficial when it comes to bettering my leadership skills and working with others. Out of the three sessions, I attended the, “Tidy Up Your Newsroom, Marie Kondo-Style” was one that really stuck out to me. The comparison they used to compare cleaning and organizing your home and your newsroom was very comparable. The sessions as a whole were beneficial because at the end of each session an open forum was created so other people could share their experiences in their newsrooms as well. I also had the opportunity to talk to and network with numerous students and advisors as well.

During my session led by Brandon Carter who works at NPR and Adrienne who works at the Los Angeles Times, they covered how social media can be covered in regards to breaking news, multimedia and other news topics. This was beneficial because it showed me ways through real-life examples. My favorite part of the day was finally gaining the opportunity to visit the National Museum of African American History and Culture. I have been wanting to go here for years, so I was very excited. Although I did not get to see everything due to time like I wanted it was absolutely breathtaking and definitely the number one highlight of my trip.

The most useful session I went to was, “Campus Sexual Assault, Title IX and #MeToo: 5 Stories You Can Do Right Now” The speaker was Sarah Brown of The Chronicle of Higher Assault. The session was very informative on how to not only build rapport with campus Title IX offices and well as covering the sensitive topic of sexual assault and harassment, including writing researching where student funds go. The other session I attended “I’m Sorry, Is MY PERSONALITY Getting in the Way?” helped me discover my own personality traits within the workspace and how to work with others.

I also attended a session where I was able to network with several other campus publications and law professor. In the session, the professor gave us tips on how to work around gag orders on university employees and the different law clinics opening across the United States working to combat these practices. Although we have our own issues with censorship on our campus, it was very crazy to hear about the extremes some schools go through to keep their student media from speaking out.

The sessions really taught me that my path in journalism will not be the most conventional. The first session was information about a photography contest, which I entered. I decided to use my 35mm film camera instead of my DSLR, to truly test myself. The second session was about living and going to grad school in New York, and the third was about music & travel journalism. The last two sessions really showed me that my viewpoint on journalism is not the same as my peers. While most want to go into journalism in a more formal sense, I plan on going into a more creative side and be able to express myself with my photos and the digital content I make.

The second day was the most interesting day in my opinion. The sessions I attended were focused on photography and social media. The first session was called, “Visual Literacy & Today’s Audience,” which showed how to build a truly captivating Instagram page. It made me critique my own Instagram and think about how I’m going to go about posting in the future. The next session was about shooting low-light photography. This was very important for me because I plan on eventually shooting concerts. The last session I attended was held by Poynter Institute, which covered insensitivity in journalism. This featured our former Editor-in-Chief Alexis Wray, who talked about the Black Narrative project. Overall, this trip gave me a new understanding of myself and my work.

My favorite session was the first of the day, which was “Bringing Visual Stories to Life.” The instructor was very encouraging and the overall session was enlightening. I was given a different mindset when it came to telling stories visually. I was inspired to do better work and really think about how I want to tell my stories.

The first class I attended was one about, “Journalistic ideas.” We were broken up into groups and for certain topics and we listed 5 potential story ideas. The second class was by far my favorite. It was, “Improv in Journalism.” We played all types of Improv games with a real-life comedian. My final class was an AP style game show where we were asked questions from the latest AP stylebook. Overall, day one of the conference was cool.

My first day of the sessions was very informative. All three of the speakers either reminded me of key information or taught me something new. My favorite session today was the first session I went to which was called “The Art of Visual Storytelling.” The second session I went to today was very fun and I had a great time while also learning something at the same time.