Growing pains aside, Aggies are ready for conference play 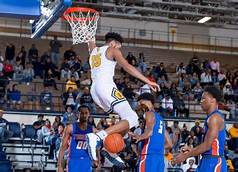 GREENSBORO — Same jerseys. Same logos. Same arena. Much has not changed about the N.C. A&T’s men’s basketball team except their roster.

Primed for another run at the Mid-Eastern Atlantic Conference (MEAC) championship, the Aggies entered the 2019-2020 season with eight new players.

At the time of this writing, the Aggies are 3-11 — but this is not unfamiliar territory, as they were in a similar situation at 5-9 through 14 games last season and finished their season 19-13 thanks to a 13-3 record in conference play.

The Aggies are understandably going through growing pains with a mostly new roster that includes four true freshmen.

Interim Head Coach Willie Jones was enthused about the positives the team could take away even in the losses during the non-conference portion of the schedule.

“We get to learn a lot about the team, and we get to grow and see where our chemistry is,” Jones said.

“We want to put out a gritty team that scraps and claws to win games, and ultimately, we want a group of guys going into conference play that want to work one game at a time and look to win games,” he added. “Our focus and slogan this season is to be 1-0 every game and not look too far ahead.”

N.C. A&T was able to capture the No. 2 seed in the 2019 MEAC tournament and earned a first round bye partially because the team got off to a blazing 6-0 start in conference play.

Jones elaborated on the importance of getting off to a good start this season in conference play just as they did last season, especially with the influx of new talent on the roster.

“[We] definitely want to get off to a good start — it is important to the confidence of the team,” he said. “When the wins add up, we want to focus on one game at a time and get to the ultimate goal [MEAC Championship].”

The Aggies finish their non-conference schedule with a home game versus the Mid Atlantic Christian University Mustangs (4-5) on Jan. 3 before they play host to the Florida A&M Rattlers (1-9).

The Aggies defeated the Mustangs by 48 points last year in a game that was largely decided after the first half with the Aggies up 48-19. N.C. A&T would win that game 104-56.

The Aggies and the Rattlers played twice last season with the teams splitting the season series and the home team in each matchup winning by more than 20 points.