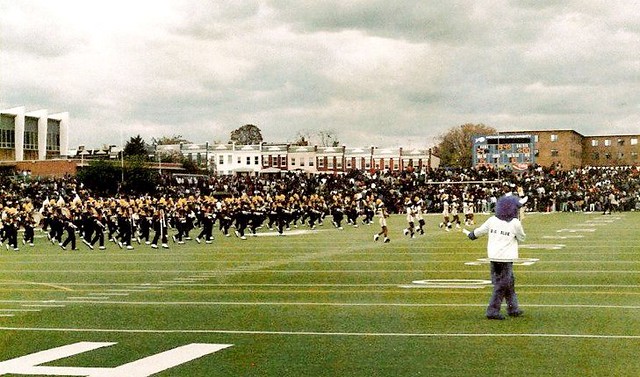 BGMM won the Battle of the Bands for the second time in a row.

The Honda Battle of the Bands was created specifically for Historically Black Colleges and Universities (HBCU). It was made to celebrate, recognize and showcase the excellence of HBCU marching bands as well as showing the drastic improvement seen over the years.

Honda annually awards $200,000 in grants to participating bands during the program period. Only eight bands are chosen to perform for the annual showcase.

This was N.C. A&T’s sixth appearance at the event on Jan. 25. The last time the event had a winner was 2014, in which the BGMM was victorious.

BGMM came back a week early from winter break, Jan. 6 and practiced until Jan. 24.

“It felt great winning, knowing that all of the hard work we did was worth it,” says 4-year band member and drum major Kenneth Crook whose 2020 edition of the BOTB was his last performance.

“Everyone knows that feeling of putting so much time and effort into something and getting a wonderful outcome. Besides every school receiving money, winning has helped with “good recruitment and exposure for the school,” he added.

Being in the band taught him to communicate with people, be punctual, gain responsibility, and no matter what is going on in your life, no one cares they just want to see a good performance.

“There is nothing like the feeling of being on the field and having people watching you.”

“Before I knew we won, I already felt good about the performance but after the fact, it felt even better because we worked extremely hard,” freshman Golden Delight, Zalia Hutchinson said.

One thing I won’t forget is the feeling of being out there and seeing all those people. Just the excitement and the adrenaline rush.”

As a freshman, Hutchinson said she feels that she has many more things to learn.

“Golden Delight has impacted my life because I grew as not only a dancer but as a person. It has taught me how to be a strong, independent woman. But, also how to be accountable for myself and others.”

The BGMM has many dedicated and talented student musicians. They’ve always been the essence of Aggie Pride and their hard work is always recognized.