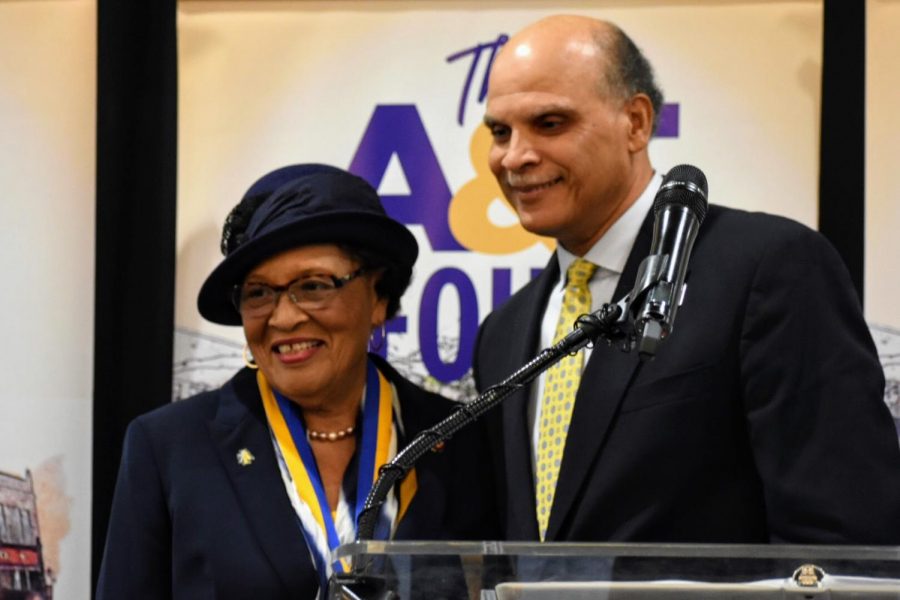 The legacy and accomplishments of the notable A&T Four were honored last week through awarding social advocates in local and national communities.

The celebration commenced with the annual breakfast with this year’s keynote speech given by award-winning journalist, author and host Roland S. Martin.

Martin is the host and managing editor of #RolandMartinUnfiltered, which is the first daily online show in history to focus on news and analysis of politics, entertainment, sports and culture from an explicitly African American perspective.

Along with being named one of the “150 Most Influential African Americans in the United States” four times by Ebony Magazine, Martin was also named the National Association of Black Journalists’ “2013 Journalist of the Year.” He is known for his extensive focus on voter suppression and other issues concerning African Americans during the 2012 election.

“You don’t need permission to stand up,” Martin said when discussing the importance of social activism and civil rights.

Martin used his own platform, supported by NABJ, to fight for civil rights in 2019 broadcasting the lack of diversity at CNN.

As the keynote speaker, Martin emphasized the massive influence the sit-in movement continues to have on people no matter their age.

“This generation has to do the exact same thing that the previous generation did,” Martin said.

“As we move to a nation that is moving to the majority, we are losing our voices.”

Martin also explained the power of voting. After years of students organizing for an early polling site on N.C. A&T’s campus, the site has now been provided at Dudley Hall, which is also the site location of the famous A&T Four statue.

Another point Martin made was encouraging all generations to organize and protest together when in terms of advocating for the African American community. He posed the question: “When are you old folks going to pass the baton, and get out of the way?”

The Human Rights Medal is N.C. A&T’s annual award that is presented to an individual who has had an impact on correcting social injustices and other humanitarian activities. N.C. A&T awarded its first Human Rights Medal in 2001 to Greensboro civil rights activist Lewis Brandon and has awarded it annually since 2007.

“Thank you for this medal. I am honored to receive it. Let us continue to progress and move toward the future,” Adams said.

Adams’ political service within Greensboro and the state of North Carolina has earned her the recognition for this award. In 1984, she became the first black woman to be elected to the board of the former Greensboro City Schools and she later served seven years on Greensboro City Council.

In 1994 Adams, who is a Democrat, was appointed to the N.C. House of Representatives and served 10 terms in her seat. She was also first elected to Congress in 2014 and won re-election twice.

She concluded the program with a similar message to Martin. “You take power and you use it without asking for permission,” Adams said.