Pioneering the future one swing at a time 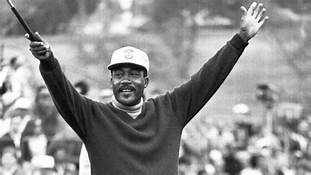 When it comes to being dominant on the golf course, one name comes to mind: Tiger Woods.

Woods is tied for the most Professional Golf Association (PGA) Tour wins in history, the youngest player to win The Masters at the age of 21 and was voted the PGA Tour Player of the Year seven times.

Accomplishing these goals as a black athlete in a white dominated sport is historic and has helped pave the way for other black golfers.

However, someone else had to go through racism, discrimination and hatred so players like Woods could have a chance.

This someone is Charlie Sifford. Sifford was the first black golfer to play in a PGA Tour event, and his path to history this was not easy to say the least.

The Charlotte native was introduced to golf at a young age by caddying at a local segregated golf course. Sifford earned 60 cents a day and gave 50 cents to his mother.

When he got older, however, the country club told him he was no longer allowed to practice golf there because of the color of his skin.

This did not bother Sifford, as he moved to Philadelphia, also known as the City of Brotherly Love, so he could practice his game at a public golf course.

Sifford waited for his time to shine. Then, in the 1950s, Sifford joined the United Golf Association Tour (UGA) — a league where black golfers had the opportunity to compete.

During this time, he won the National Negro Open –the grandest major the UGA offered — six times. Nevertheless, Sifford never settled for less than his best.

Sifford began to receive national attention for his play. In 1957, Sifford won the Long Beach Open which included professional players. However, it was not until 1960 that Sifford was declared an approved player by the PGA.

Sifford went on to win the Greater Hartford Open in 1967 and the Los Angeles Open in 1969.

He was not done breaking barriers just yet. Sifford would go on to be the first black golfer to be inducted into the World Golf Hall of Fame.

“If you try hard enough, anything can happen,” Sifford said.

Motivating words that he lived by to get himself through times of trial and tribulation.

His efforts did not go unnoticed by the players that came after him.

“He has my respect and my gratitude for the sacrifices he made to open the doors to this great game to people of color,” Woods said.

In 2014, President Barack Obama awarded him with the Presidential Medal of Freedom, the highest honor an American citizen can receive. The only other golfers to obtain this award are Jack Nicklaus, Arnold Palmer and Tiger Woods.

Though Sifford had to go through a lot to get where he wanted to be, he was not alone. Jackie Robinson, the first black Major League Baseball player, was on his side the entire time as he motivated Sifford in a conversation they held together.

“If you’re not a quitter, you’re probably going to experience some things that will make you want to quit,” Robinon said,

Sifford took those words and ran with it, and the rest is history.