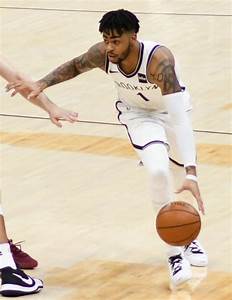 This is Russell's fourth team in five seasons.

So much for a silent trade deadline.

On the league’s busiest day of the regular season, the NBA really outdid themselves in this year’s edition of the NBA Trade Deadline.

There were a plethora of deals that took place during this year’s deadline, including a trade that involved 12 players; the biggest trade to occur since 2000.

During this year’s trade deadline, championship contenders stacked up for the postseason, middle of the pack teams barely moved the needle and the bad teams set themselves up for the future.

Time to bring out the pens and break down each big move made during the hysteria that surrounded this year’s NBA trade deadline.

Wiggins to the Warriors, D Lo to the T-Wolves

The Timberwolves have been looking for a high-caliber talent at point guard for a very long time.

After going through trials recently with Jeff Teague and ending the Ricky Rubio experiment, getting Russell in this deal gives them exactly what they’ve been looking for.

Russell is coming off an all-star appearance with the Brooklyn Nets last season and leads them to the No. 6 seed in the playoffs. Not to mention, Russell is a close friend of the Timberwolves’ franchise player Karl Anthony-Towns. Towns has publicly recruited Russell to the team for almost two years now and has been vocally frustrated with the team.

Wiggins was set to earn $94.7 million in his final three years for the T-Wolves — money that many believe he is not worth.

Although Wiggins is averaging 22.5 points per game (ppg) this season, he is inefficient and he has never lived up to the potential he has on defense. He ranks 367th in (player efficiency rating) PER out of 494 players, according to NBA.com.

Russell — offensively — is a substantial upgrade overall for the Timberwolves. The duo including him and Towns in a pick and roll situation will be tough for defenses to defend regularly, given both can shoot the ball very well and both can finish in the lane.

Russell’s production for Minnesota will give them more bang for their buck being that Russell and Wiggins have similar deals with Russell earning slightly less.

However, the Golden State Warriors did not at all lose this trade.

Playing alongside Steph Curry, Klay Thompson and Draymond Green give Wiggins the opportunity to play in a simple role for Golden State. For the first time, Wiggins will not be asked to be the star, he will be asked to play a role.

Thanks to this deal, the Warriors will now have three first-round draft picks in the next two years.

Iggy Gets His Wish

Three-time NBA champion and 2015 Finals MVP Andre Iguodala finally got his wish to play for a title contender.

Iguodala has sat out all of the 2019-2020 season so far following being traded by the Warriors to the Grizzlies for a first-round pick.

Iguodala wanted to play for a title contender, which he will now do.

The Heat are currently a top-four seed in the Eastern Conference and have proved that they can compete with the league’s best teams throughout the season.

The addition of Iguodala, Crowder and Hill provide the Heat with veteran leadership and much-needed depth right in time for a playoff run.

On the other hand, the Grizzlies gain Justise Winslow in the midst of their own playoff push as they fight to keep their spot as the No. 8 seed in the West away from Portland.

Winslow was pushed out of the Heat’s rotation due to lingering injuries and the consistent play of rookies Kendrick Nunn and Tyler Herro. Winslow has an opportunity to be a difference-maker for Memphis as they fight for a playoff spot.

Winslow is only 23 and he can guard all across the perimeter and has the playmaking ability to run the offense as a point forward. He can also spread the floor given that he shot 37.5% from three last season.

Marcus Morris is a ten-year league veteran who is currently averaging 19.6 ppg while shooting 44% from behind the three-point line.

The NBA journeyman gives the Clippers added depth for a playoff run in the heavy stacked West. Morris’ above average scoring and defense can provide help and ease for stars Kawhi Leonard and Paul George, who already have a huge toll on them.

The presence of Morris makes the Clippers an even more dangerous threat come playoff time and provides true insurance in case of injury.

The Clippers currently sit as the No. 3 seed in the West behind the Nuggets and Lakers. One could assume that they are aiming for home-court advantage throughout the Western Conference playoffs.

The Clippers intend to start Morris at power forward alongside Paul George and Kawhi Leonard, according to Chris Haynes of Yahoo! Sports.

This gives the Clippers the dynamic of three two-way players to play out on the perimeter.

It is no secret that Mike D’Antoni and the Houston Rockets have the most high powered offense in the league. It is also no secret that Clint Capela hinders it from being what it could be.

The Houston Rockets on an average shoot about 44 three-pointers a game and they’d like to shoot even more.

With the addition of Russell Westbrook, the Rockets now have multiple threats on offense. Westbrook likes to score a lot at the rim and with Capela down there, he clogs the paint. So shipping Capela away for a two-way wing makes perfect sense for Houston.

Replacing Capela with a wing player creates a wide-open lane for Westbrook and Harden to penetrate the defense and have the option to kick out to a shooter.

Robert Covington provides the Rockets with deadeye shooting and elite perimeter and post defense. Just a season ago, Covington was on the NBA’s All-Defensive First Team.

For the Hawks, on the other hand, Capela gives them the much-needed size and strength down low.

The Hawks currently give up the second-most points in the paint per game with 53.4, according to teamrankings.com. Capela provides an instantaneous presence down low for them given he is one of the best rim-protecting big men in the league.

Capela is currently sixth in blocks and fourth in rebounds per game according to NBA.com.

Capela also will now help Atlanta’s offense excel in pick and roll situations with his ability to play and finish above the rim.

The Hawks now have a young foundation of Trae Young, John Collins and Capela leading the way for their very bright future.