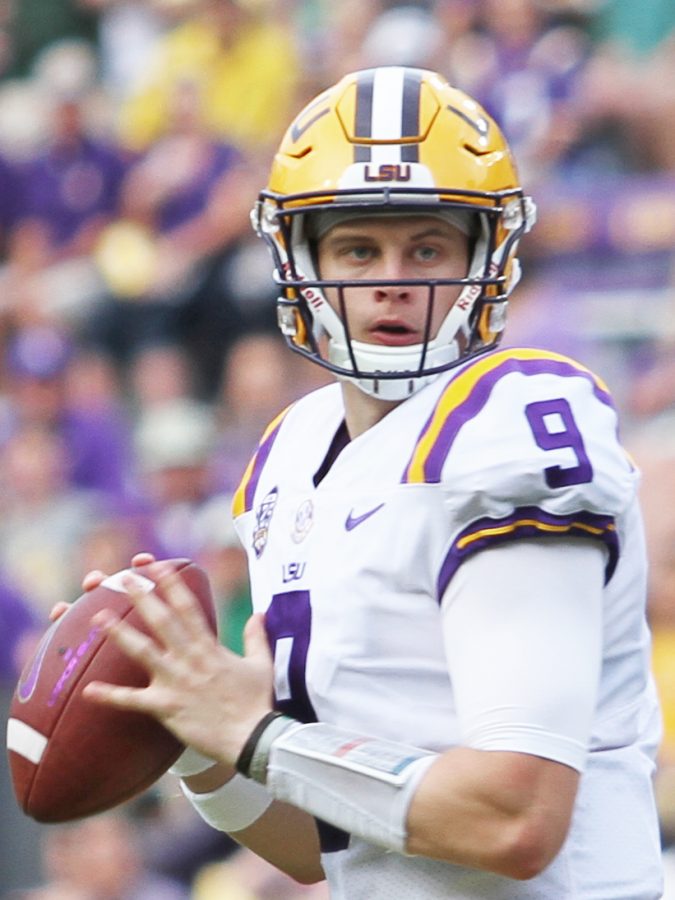 In an unprecedented (but very much needed for the sports world) move, the 2020 NFL Draft is still scheduled to happen on April 23-25, despite the current coronavirus pandemic. This year, instead of boats taking players to the podium in Las Vegas, the draft will be held virtually.

In this top 10 mock draft, I will state what a team will do barring trades and what they should do if they are in a position to trade.

If they stay put in this draft slot: Draft QB Joe Burrow (LSU). The Bengals need a quarterback, and neither Andy Dalton nor Ryan Findley will cut it. The Ohio native threw for 60 touchdowns against six interceptions and led LSU to an undefeated season that culminated in a national championship victory over the Clemson Tigers.

What they should do with this pick: Draft QB Joe Burrow. There is nothing to think about and that includes trading down or selecting Tua Tagovailoa.
2. Washington Redskins needs: OL, TE, LB
What they will (probably) do with this pick: Draft EDGE Chase Young (Ohio State). The Redskins should stay put and draft the most surefire future pro bowler in the draft, and that’s Young. While drafting Tagovailoa would be a nice option, they drafted Dwayne Haskins last year and they should get the sophomore another chance to improve. This pick will certainly be the case of picking the best available player.

What they should do with this pick: Draft EDGE Chase Young. Drafting Tagovailoa would be interesting, but with his injury history and having Haskins on the roster, there is no need to skip on the most complete prospect in the draft.
3. Detroit Lions needs: CB, DL, OL
If they stay put in this draft slot: Draft CB Jeff Okudah (Ohio State). The Lions traded their best cornerback since probably Dre Bly in the mid 2000s in Darius Slay, who was traded to the Eagles this offseason. The Lions really need a cornerback opposite of the newly acquired former Falcon cornerback Desmond Trufant.

What they should do with this pick: Trade down with a quarterback needy team. If the Lions trade down with the Chargers who hold the sixth pick. It is very likely that Okudah will still be there. It probably will take one quarterback needy team trading into the top 5 for other teams to try and do the same. Lions get more picks and still get their guy later in the top 10.
4. New York Giants needs- OT, EDGE, S
If they stay put in this draft slot: Draft LB Isaiah Simmons (Clemson). The next surefire player (after Young) and arguably the most versatile player in this draft is Simmons. He lined up 218 snaps at safety, 280 snaps at outside and inside linebacker and 286 snaps at slot cornerback per Field Yates. Simmons ran a 4.39 40-yard dash at the NFL Combine and can run sideline to sideline. The Giants finished 25th in total defense and they need all the help they can get defensively.

What they should do with this pick: Stay put. The Giants need an offensive tackle so if they traded back inside the top 10 to get one it would be plausible but sometimes a team should pick best available over need.
5. Miami Dolphins needs- QB, OL, RB
If they stay put in this draft slot: Draft QB Tua Tagovailoa (BAMA). Tua was coming into the 2019 season as a favorite to be the number one overall but a hip injury ended his season prematurely, and there are still rumblings that Cincy may want to draft him. If it is true that Cincy even entertained that thought, then that means teams think he’s healthy and that they see him as a franchise talent. Josh Rosen is not the answer in Miami, and if Tua is here, there is no need to let him fall to the Chargers at No. 6.

What they should do with this pick: Draft Tua. Mel Kiper’s latest mock draft has the Dolphins selecting QB Justin Herbert, and while that would not be a bad thing because he has prototypical size, Tagovailoa is thought to have the higher ceiling.
6. Los Angeles Chargers needs- QB, OT, LB
If they stay put in this draft slot: Draft QB Justin Herbert (ORE). With the release of Philip Rivers, the quarterback spot is available for the first time in over 15 years for the Chargers. Herbert at this selection would fulfill a need and would be a more fitting quarterback for the Bolts at this time. Rivers — who threw for over 4,200 pass yards and completed 66% of his passes last season — was productive but also threw 20 interceptions; also, he is 38 and is immobile. Herbert has a strong and is more athletic than given credit for.

What they should do with this pick: Trade up to No. 3. Like for what I said for the Lions, they should trade up to No.3 because the first two picks in the draft in Burrow and Young are almost guaranteed locks. At No. 3 your choice of Tua or Herbert is available.
7. Carolina Panthers needs- DL, CB, EDGE
If they stay put in this draft slot: Draft DT Derrick Brown (AUB). Brown is a plug-and-play type of guy and is one of the most complete interior defensive lineman. He is very quick at shooting the gaps and will force many double teams. The 320-pound man has elite strength and is a guarantee to improve the defensive line especially with the losses of Gerald McCoy, Mario Addison and Vernon Butlerin the middle.

What they should do with this pick: Stay put and draft Brown. Brown would lead the charge in this rebuild of sorts for the Panthers along with EDGE Brian Burns.
8. Arizona Cardinals needs- OL, EDGE, DL
If they stay put in this draft slot: Draft OT Mekhi Becton (L’ville). Becton is a massive player at 369 pounds, but he has good footwork and is a monster in the run game. He is incredibly strong and has some mobility to go with that strength. This should be a welcoming sign for the Cards who allowed Kyler Murray to get sacked 48 times in his rookie campaign. Brown is also a plug-and-play type of guy and is one of the most complete interior defensive lineman. He is very quick at shooting the gaps and will force many double teams. The 320-pounder has elite strength and is a guarantee to improve the defensive line especially with the losses of Gerald McCoy, Mario Addison and Vernon Butlerin the middle.

What they should do with this pick: Draft an offensive tackle. It does not have to necessarily be Becton; it can be Georgia’s Andrew Thomas, Iowa’s Tristan Wirfs or Alabama’s Jedrick Wills.
9. Jacksonville Jaguars needs: CB, DL, EDGE
If they stay put in this draft slot: Draft CB C.J. Henderson (FLA). The former All-SEC selection could be the pick for Jags at No. 9. He would be replacing a pretty big cornerback in Jalen Ramsey who like Henderson, is over six foot tall. Henderson has incredible ball skills and has long arms which makes throwing to receivers in his area more difficult considering his body placement is off at times.

What they should do with this pick: Draft DT Javon Kinlaw (S. Carolina). There is a valid argument to draft Florida’s cornerback C.J. Henderson considering that the team lost two former All-Pro cornerbacks in the past 10 months, but with EDGE Yannick Ngaokue wanting out of Duval county, the Jags need to sure up this front line. Kinlaw’s motor isn’t like that of Brown’s but his bull-rush and block shedding are second to none.
10. Cleveland Browns needs: OT, S, LB
If they stay put in this draft slot: Draft OT Andrew Thomas (UGA). The Browns already did Baker Mayfield a solid when they signed All-Pro right tackle Jack Conklin in free agency. Now it is time to sure up the blind side and select a left tackle, and that is where Thomas comes in. An impact blocker to say the least, Thomas is the definition of raw strength and is a menace in the run game.

What they should do with this pick: Draft OT Andrew Thomas. Unless Simmons drops to No. 10, then there is no real reason to not select an offensive tackle here at this point, as Greg Robinson was putrid last season.