Tensions arise in N.C. as protests turn into riots 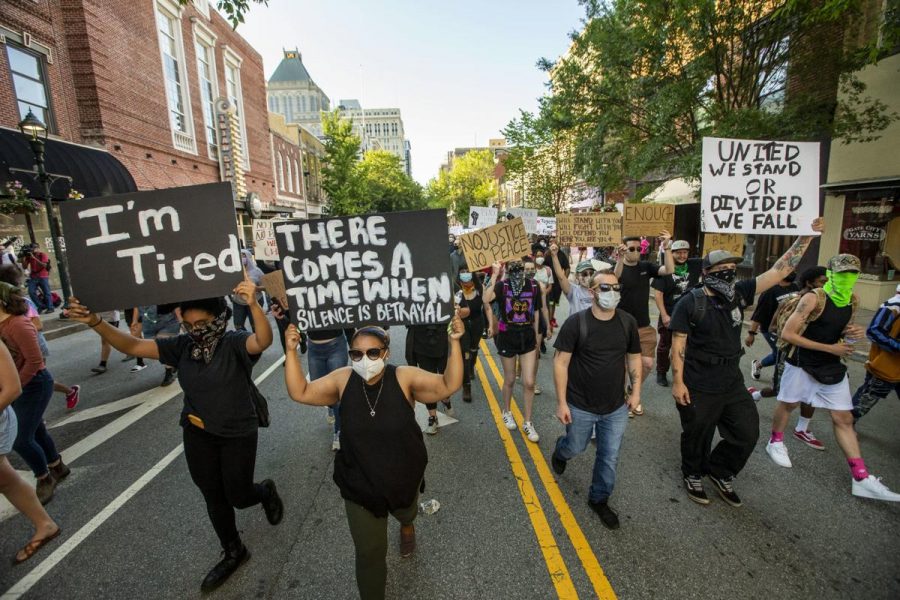 The early scenes of protests from Greensboro on May 31.

GREENSBORO– People around the country have expressed their outrage over the recent death of another unarmed African American at the hands of the police.

George Floyd, 46, died on May 25th after Minneapolis police officer Derek Chauvin pinned his knee to the back of Floyd’s neck while Floyd was handcuffed and lain down on his stomach. Chauvin kept his knee on Floyd for almost nine minutes.

The protests have reached Los Angeles, New York, Atlanta, Charlotte, Chicago, Raleigh and Greensboro among others.

“They tear-gassed us,” Alyssa Parker, a senior student at N.C. A&T said.

Parker mentioned that while protesting a participant threw a water bottle at a parked police car and that is when the crowd began to get chased by Greensboro police.

“Someone threw a water bottle at the cop car and the cop got out of the car aggressively and we began to run toward the train track and the police began running towards us. That is when a different officer on a bike appeared and told us to ‘get the f— out of here’” and then began spraying tear gas toward the ground.”

Greensboro was not the only North Carolina city to have a protest go off the rails.

“My sister and I sat to take a rest and then we saw people running from where we were just at and members of the Raleigh police department were tear-gassing people and chasing them, so we ran too,”Jewell Hill, a Raleigh citizen said.

It is becoming apparent that some protests are peaceful while others can turn into riots. Hill noted not all riots are caused by the protestors.

“I feel like rioting from what I have seen, only happens when police show up. As far as the looting goes, I personally think there is nothing wrong with looting from these corporations because they have insurance. When it comes to the smaller owned black stores I think that is when it becomes a bit much, said Hill.

While some protests result in riots not all of them do, such as the protest that took place on May 31st in Charlotte near the Spectrum Center, the home of the Charlotte Hornets.

“It was very peaceful and well organized where I was at. I did not experience no issues and it was all love. It was a collection of people, Black, White and Asian,” Bradford Brooks, a native Charlottean said

“This is bigger than me and I wanted to be apart of this. It is important because we got to be heard. Enough is enough. Physical representation, we have that and since George Floyd cannot speak up for himself then it is our responsibility to do it.”

Brooks said that while he feels for gratification for being an African American, that the repetition of police brutality is getting benumbing.

“I feel two things. First, I feel proud to be black more than ever. I finally see that people are seeing that the stuff that has recently occurred is not right. Secondly, I feel drained. I have become numb to the fact that this always happens to us [African Americans],” Brooks said.

Among the protesters interviewed for this piece about whether rioting and looting was okay, the general answer was that it was justifiable. Everyone except one N.C. A&T student, who was concerned about the plans of the protests going forward.

“I am conflicted about the rioting…Chicago severely looted its south and west side communities and that’s where a lot of us black people live…We do not know if they are going to rebuild these facilities,” Karimah Preston, a Chicagoan and junior at N.C. A&T.

“I feel some people are being opportunistic. On Monday I was trying to help clean up the looted Wal-Mart and people were still actively looting it.”

President Trump addressed the American public from the White House on Monday June 1 saying that he will use active military troops to “mobilize thousands and thousands” if the governors do not deploy the use of the National Guard on protesters.

After the speech, military and law enforcement used tear gas to clear protestors so Trump could walk and take a picture with a burnt bible in front of a nearby historic church.