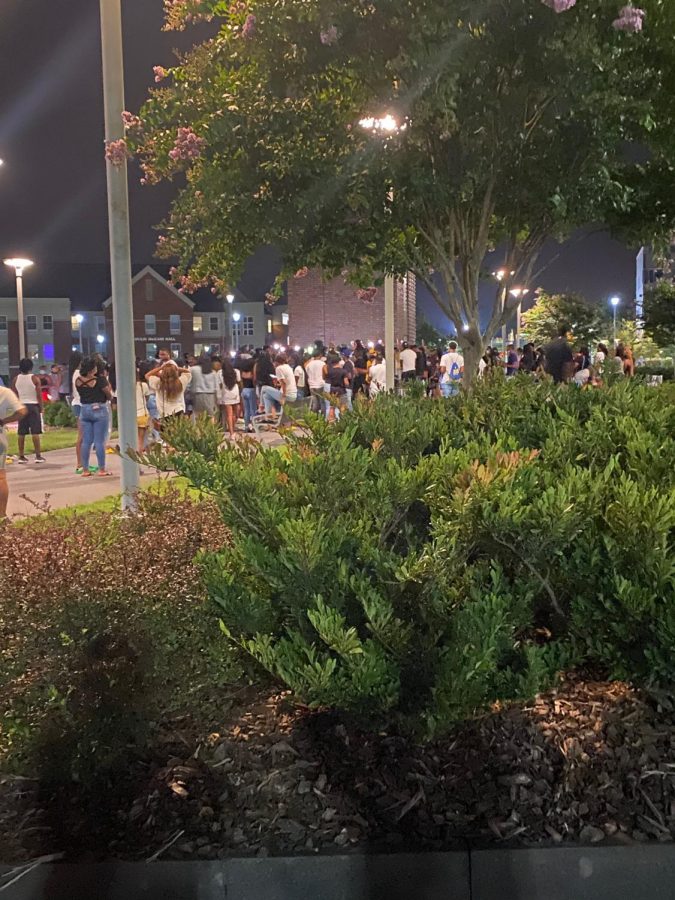 N.C. A&T students were the subject of online scrutiny due to a viral photo that showed some of them not adhering to social distancing guidelines and gathering around the Deese clock tower.

New and incoming students at N.C. A&T were welcomed to the campus in a staggered process, a week before continuing students, so they could move in and acclimate themselves to the campus, as well as adhere to social distancing guidelines.

Rumors began to swirl that the students were gathered to participate in a campus-wide game of Manhunt, which in recent years has become an unspoken campus tradition during the move-in weekend for the incoming class.

N.C. A&T has committed to re-opening the campus amidst the COVID-19 pandemic for the 2020-2021 academic school year. Over the past few months, Chancellor Harold L. Martin and other N.C. A&T leaders have held virtual forums to discuss the plans in place for the school when students return.

Among them, wearing a mask and maintaining social distancing guidelines.

“When I first saw the picture I was pretty shocked,” Skylar Montugue a freshman biology student at N.C. A&T. “I know other schools had been getting backlash for a lot of similar behavior so I was hoping [N.C. A&T] students would be better with the safety precautions.”

Montague also stated she would be participating in distance learning at home this semester due to COVID-19 concerns.

“I will not be on campus at all this fall and for this exact reason,” Montague said. “My parents and I decided to stay at home because I was concerned for my safety as well as my family’s, so I felt I had to sit this semester out.”

Some students pointed out the Community Infectious Disease Mitigation Agreement  that N.C. A&T released on Aug. 5, states that students could lose their campus housing if they do not participate in the social distancing guidelines.

For those that signed before reading💋 #ncat pic.twitter.com/eePfQ2jhAL

Not all students were upset and some took to Twitter to defend the incoming freshmen.

#NCAT24 wants to enjoy themselves. 90% of them are wearing masks. Everyone in fact had one on when I went on campus Friday. They’re gonna socialize. They’re human. It is what it is. Majority voted for classes to be on campus as opposed to all online. What did y’all expect?

Other students, such as rising sophomore journalism and mass communication Nakylah Carter, do not think that students who were not participating in social distancing should not be held accountable.

“They don’t get any slack because they’re freshmen. Everyone has an equal amount of risk to get [COVID-19],” Carter said. “It isn’t just for older people like how it was initially believed to be.”

Per the North Carolina Phase 2 guidelines, gatherings of 10 or more people in a single indoor space are prohibited. Gathering in outdoor spaces are limited to 25 people.

Governor Roy Cooper has delayed the transition to Phase 3 until Sept. 11. This is the third time that Phase 3 has been postponed.