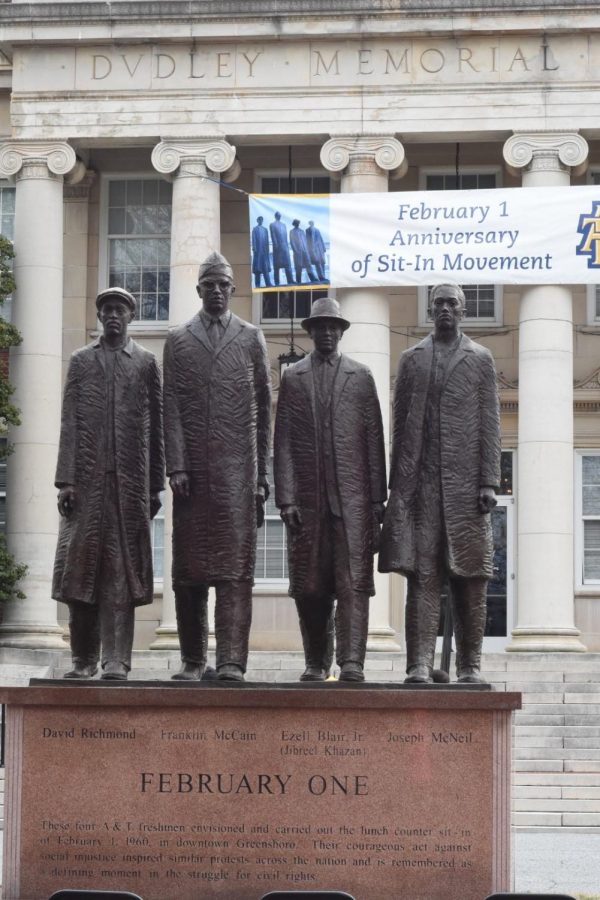 The February One statue was designed by sculptor James Barnhill, an art professor at North Carolina Agricultural and Technical State University. The statue is dedicated to the Greensboro Four (also called the A&T Four): David Richmond, Franklin McCain, Ezell Blair Jr. (now known as Jibreel Khazan) and Joseph Moore. The four were students at the university who began the sit-in movement at the Greensboro Woolworth's lunch counter.

This donation comes as part of Bank of America’s four-year commitment, directing one-third, or $300 million, of its $1 billion commitment to four key areas with $25 million in support of jobs initiatives in Black and Hispanic/Latino communities.

Chancellor Harold L. Martin Sr. received the donation from Derek Ellington who is the Triad market president for Bank of America.

“We’re proud to be able to prioritize Historically Black Colleges and Universities and Hispanic-Serving Institutions,” Ellington who is also a member of N.C. A&T’s Board of Visitors said.

Investment details include, $25 million in initial grant funding in support of jobs initiatives and include partnerships with:
11 community colleges that serve predominantly Black and Hispanic/Latino students.
10 public HBCUs and HSIs.

“These initial investments will address access to jobs and support for small businesses by creating more pathways to employment in communities of color and more support for minority entrepreneurs,” Brian Moynihan, CEO of Bank of America said.

As a state-assisted member of the University of North Carolina system state funds cannot be used for the band, athletics, most academic scholarships and many other university needs. Those endeavors must be supported by donations and student fees.

The donation from Bank of America will go toward university advancement with a focus on creating a program for access to employment opportunities and experiences.