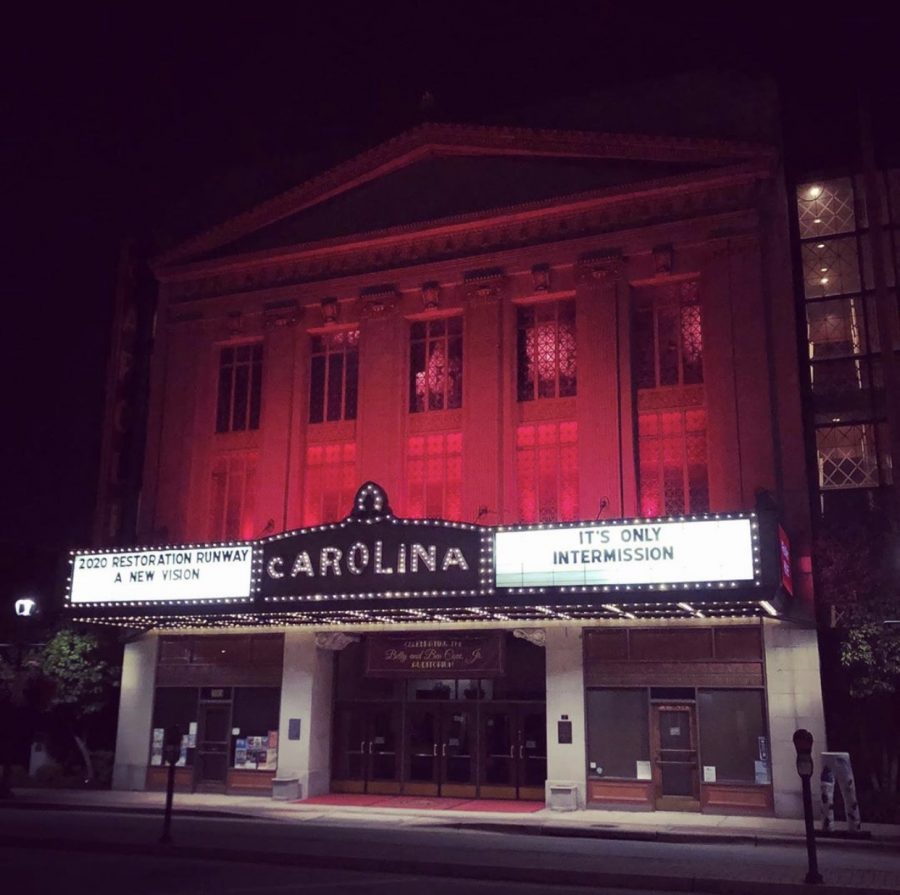 Photo Courtesy of Carolina Theatre of Greensboro on Instagram.

The historic Carolina Theatre in Greensboro participated in the #RedAlertRESTART movement to bring public awareness to the struggling live events industry due to the COVID-19 pandemic.

On Tuesday, Sept. 1 from 9 p.m. to midnight, the theatre lit up in red to show the city the live events industry is on “red alert” for its very survival.

The event was created by #WeMakeEvents, a North American coalition for the live events sector, including non-profits, music venues, and entertainment businesses.

Over 2,000 performance venues, residences and historical structures from 75 cities and towns across the United States lit up in red in response to being closed down since early March. #WeMakeEvents initially set a goal for 1,500 buildings to participate in this event but the nationwide response reached beyond their expectations.

Since the start of the pandemic, over 77 percent of the live events staff have lost 100 percent of their income, including 97 percent of 1099 workers according to wemakeevents.org.

The live events industry is an $877 billion industry, yet 95 percent of live events have been canceled due to COVID-19 and 96 percent of companies have had to cut their staff and/or wages.

The #RedAlertRestart movement by #WeMakeEvents is asking for Congress to pass the RESTART Act (S. 3814) to offer economic relief to the millions of live event employees out of work.

The #ExtendPUA movement by #WeMakeEvents is also asking for an extension of Pandemic Unemployment Assistance (PUA) to provide additional financial relief to the live events sector.

“The entire live events industry is on the brink of collapse. Without financial relief, many businesses stand to permanently close and families risk bankruptcy and homelessness,” Brad Nelms, Director of We Make Events North America said in a statement. “We want to take this opportunity to show the world the scale of what it takes to make live entertainment events happen and demonstrate how much this crisis has affected our community.”

Did you catch our historic nonprofit theatre all lit up for #RedAlertRESTART 🚨?? A coalition of organizations concerned about the fate of the live events industry in North America held a Red Alert event last week. Buildings, structures, and residences were lit in red to raise awareness that the live events industry is on red alert for its very survival. In the US, #WeMakeEvents #RedAlertRESTART and #ExtendPUA will be asking Congress to pass the RESTART Act (S.3814) as quickly as possible, offering economic relief to the live events industry, which has been shuttered since March, 2020, putting millions of people out of work. The movement is also supporting a call for the continuation and extension of Pandemic Unemployment Assistance to provide relief to those without work due to Covid-19. Don't let your theatre go dark. Ask your representatives to save the arts! Want to support us directly? Go to carolinatheatre.com/donations #GSO #ArtsGSO #covid19 #supportthearts

A post shared by Carolina Theatre of Greensboro (@carolinatheatregso) on Sep 9, 2020 at 9:23am PDT

Brian Gray, the executive director of Carolina Theatre Greensboro shares that the pandemic has affected the theatre immensely, as his staff has been working from home since March 10 when they initially thought the shutdown was only going to be for a couple of weeks.

“If we had known at that time that we would be closed for over six months, it would have been catastrophic, but at the time we were told it would only be for about 15 days to flatten the curve,” Gray said. “15 days turned into 15 weeks, and 15 weeks has now turned into months.”

The coronavirus pandemic has hit his staff hard this year. Gray says he has over 43 employees on payroll, with at least 42 employees on some type of unemployment assistance. The shutdown has had devastating effects on not only his staff but also the performers, as they haven’t had any bookings or sales since mid-March.

Since booked performances had to either be canceled or rescheduled, this has pushed back many events for next year. The Carolina Theatre usually does 400 events a year, but Gray has already postponed at least 250 events since March 10.

He says live performances at the Carolina Theatre won’t be starting again until 2021, but he does not know when exactly the theatre will reopen to the public again until Gov. Roy Cooper announces Phase 3 for North Carolina.

“Even if he [Gov. Cooper] says we can go into Phase 3 on October 1 [theoretically], we don’t know if that’s going to increase our capacity limit, and we can’t do any kind of planning as there is no reopening plan,” Gray said.

He says the live events industry is not the type of business that can just reopen, shut on the lights and unlock the door. It takes weeks and possibly months to schedule out performances for events.

“We have to hire the groups, get the advertisement, sell the tickets and promote the event. We need at least 2-3 weeks ahead of time,” Gray said.

Although there are not, currently, any live events at the theatre and they are temporarily closed to the public, Gray says they are planning a virtual concert series to be scheduled for October.

They will be starting a virtual series where they will sell 25 tickets for people to have a “live experience” at a concert as they will record and broadcast the event on Youtube. The 25 guests can socially distance themselves by being completely spread out within the theatre. With over 1,100 seats, this will create a very unique experience for concert goers who are used to being in crowded venues.

The independent venue is hoping to make it through this pandemic through the support of the #RedAlertRestart movement as well as their Save the Stages campaign. For the campaign, a letter can be sent to the Save Our Stages website to senators and state representatives about saving live music venues and small businesses like the Carolina Theatre.

The theatre is a non-profit, so they do not receive additional funding from the government in regard to their expenses. The RESTART act could provide much relief not only to staff members but to the theatre’s utilities expenses to keep the building up and running.

The local community can show unity and support for the historic theatre by donating to their Setting the Stage Campaign. They can also write a letter to the local congressional leaders to the We Make Events website to pass a comprehensive relief bill for the arts and entertainment industry.

The Greensboro community can contribute to the financial survival of the live events industry by supporting the We Make Event’s #RedAlertRestart movement and donating to the local community theatre. They are asking for donations on the Carolina Theatre website.