‘Insecure’ actress talks self- empowerment at the Speaker Series 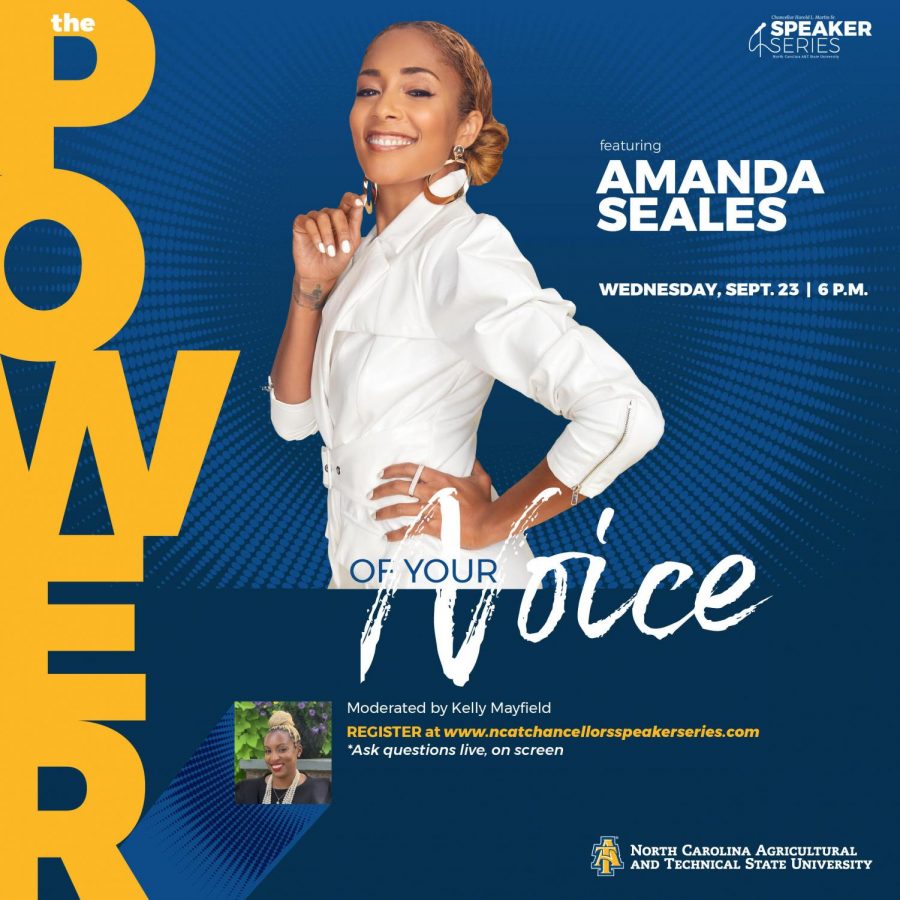 ‘Insecure’ actress, Amanda Seales, talks self-empowerment at the 14th Chancellor Speaker Series where she talked about the true importance of “The Power of Your Voice.”

The Chancellor’s Speaker Series was one of two major discussion and lecture initiatives implemented by Chancellor Harold L. Martin. The series was first launched in 2017 with an array of speakers showcasing preeminence in leadership, entrepreneurship, culture, politics, and social awareness. Kelly Mayfield, Aggie alumna and Pandora Senior Sales executive, moderated the event.

During Seales’ early years in Hollywood, she was a host for MTV’s Hip-Hop POV. Before she decided to dedicate most of her time to acting and activism, she was also a touring member with the musical group, Floetry (an R&B group from England including Marsha Ambrosius and Natalie Stewart).

As a proud alumna of Purchase College and Columbia University, Seales knows the importance of constantly learning.

“My education is the cornerstone of my livelihood, character, and purpose. It is the reason why I have a career and not a job,” Seales said. “A job is how you get your money and a career helps you get your life.”

Through her countless acting roles, she displays her outspoken personality on screen. In her most recent role, she is able to use her personality while embodying “Tiffany” on HBO’s ‘Insecure’.

During the series, Seales mentioned being consistent when it comes to change.

“Every day you have to make an active decision to be a part of the change,” Seales said.

Seales frequently goes live on Instagram expressing her views on current events. Aside from social media, Seales decided to bundle her thoughts and opinions into a book. “Small Doses: Potent Truths for Everyday Use” is a composition of essays, life advice, and pearls of wisdom.

Seales reiterated using “The Power of Your Voice” by explaining how being mute does more harm than good; your voice is a language that can be used against oppressors.

It's important that you know how to speak the language of your oppressor so that you can rewrite the story that they are writing for you. #NCAT pic.twitter.com/0V4djPIxUY

“People cannot take what you know. Make sure that you curate your time at N.C. A&T with care because it will be the foundation for the rest of your life,” Seales said.

Jordan Giles, a senior criminal justice student expressed how she left the series feeling excited to use her power.

“Amanda really challenges me to go after all of my career aspirations. By listening to her, I have learned how impactful I can be just by speaking up,” Giles said.

The next Chancellor’s Speaker Series at N.C. A&T will take place at the end of October.