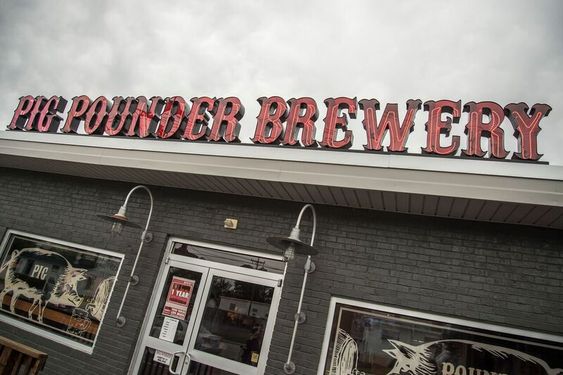 Pig Pounder Brewery in Greensboro has been participating in the “Black is Beautiful” initiative, a collaborative effort among the brewery community to bring awareness to the social injustices towards people of color.

The effort is to show that the brewery community is an inclusive and accepting space for any race or ethnicity. Created by Weathered Souls Brewery in San Antonio, the initiative was a response to the racial injustices and police brutality that has plagued the nation.

In June 2020, during the height of civil unrest in America, the brewery set out to make a statement to the world that the brewery community will not stand for racial inequality. Marcus Baskerville, founder and head brewer at Weathered Souls Brewing Company, wanted to provide a platform for the brewing industry to fund for change in communities across the United States. He decided to brew a stout for breweries to serve after the same name of his initiative: Black is Beautiful.

“As someone who has personally dealt with the abuse of power by the police, this recent turmoil the country is facing has hit home for me,” Baskerville said in a statement. “For us, we feel that this is our contribution to a step [towards a change]. Sometimes that’s all it takes for change.”

There are currently more than 1,100 breweries from all 50 states and 20 countries that are participating in the initiative, with 41 of those breweries being located in North Carolina according to Greensboro News and Record.

Wise Man Brewery in Winston-Salem, Kernersville Brewery Company in Kernersville, and Pig Pounder Brewery in Greensboro are a few of the local breweries that have been participating within the triad area. Each brewery participating will be donating 100 percent of proceeds from sales of the brew to a local organization of their choosing; a foundation that supports police brutality reform, equality and inclusion among the black and brown community.

Now introducing to you, BLACK IS BEAUTIFUL! 🤟🏿🤟🏽🤟🏾 —————————— The Black is Beautiful initiative is a collaborative effort amongst the brewing community, in an attempt to bring awareness to the injustices that many people of color face daily. —————————— 100% of this beers proceeds will be donated to local HBCU Universities right here in the triad. ———————- #blackisbeautiful #blacklivesmatter #nccraftbeer #greensboro #nc #gsobeer #336beer #pigpounderbrewery

Cassi Winfree, manager of Pig Pounder Brewery Taproom, shared that she is grateful that Pig Pounder has the opportunity to make a difference for people of color in the Triad community. She felt it was only right for Pig Pounder to participate in an initiative that brings awareness to racial and social injustices people of color face daily in society.

“If there is something that is available that can try to help our community in any way, it’s kind of a no brainer,” Winfree said. “We have been given a great opportunity to help make a change. We are absolutely proud to be a part of this and we are thrilled with how it’s been going so far.”

The brewery made a seven-barrel batch using a specially branded imperial stout. The stout was created from a crafted recipe by Weathered Souls Brewing Company that is used among all participating breweries.

The base recipe was designed to have a moderately high ABV of 10 percent to symbolize all of the different shades of black and brown. Each brewery has the option of adding their own spin to the Black is Beautiful recipe, but Pig Pounder chose not to stray far from the original taste.

“Our [Black is Beautiful] is truly an imperial stout, as we really didn’t do much as far as adding something too crazy to the beer. We wanted it to be natural to the ingredients that were given to us,” Winfree said.

The beer has been described to have a roast, almost coffee-like taste with flavorful notes of dark chocolate malt, caramel, flaked oats and roasted barley, as the dark almost opaque beer was developed to highlight the different hues of black.

The beer is offered in four different ways on their menu, as it can be served in a four-pack or single to go, in a pint glass at the brewery or in a flight that gives the customer the option to try out four different beers at one time.

“It allows people to at least sample the beer if they aren’t really wanting to get a full glass,” Winfree said. “The wonderful thing about it is that the money will still go towards the initiative even though it’s not a full pint of [Black is Beautiful].”

The beer has been very well received by Pig Pounder patrons, as there have been customers who come to the brewery just to purchase a four-pack or singles of the Black is Beautiful beer to take home with them. There is a collective mix of people from all different backgrounds and ethnicities in the community, who have been coming by the brewery and supporting the initiative. People who aren’t even beer drinkers are still supporting the cause by donating money for Pig Pounder to collect as part of the initiative.

The decision for Pig Pounder to donate to local HBCUs was made on the fact that they collectively agreed historically black institutions would know best on how to fight against racial inequality.

“Giving N.C. A&T and WSSU the proceeds from the beer are allowing those institutions to take action with the money and to be able to fund programs that will fight against racism,” Winfree said. “I think being able to give the money and letting them choose where it will be best suited is the right move.”

The initiative will continue on for a couple more weeks and once the brew of Black is Beautiful is completely tapped, the proceeds will be split and donated between N.C. A&T and WSSU.

“We are already talking about brewing the beer again,” Winfree said. “The only thing now is we have other beers that are coming on the menu, and we don’t want this beer to become overlooked on the board because we have too many similar styles.”

She says they may wait a few weeks before they brew a new batch of the Black is Beautiful again, so it can still be a customer favorite and not fade into the background because of new coming menu items.

“We still want it to stand out among the other beers,” Winfree said.

Those who want to support the initiative can stop by Pig Pounder to purchase a Black is Beautiful or simply donate money towards the collective effort.

To keep up with Pig Pounder and the Black is Beautiful initiative, more can be found on their Instagram and Facebook pages.