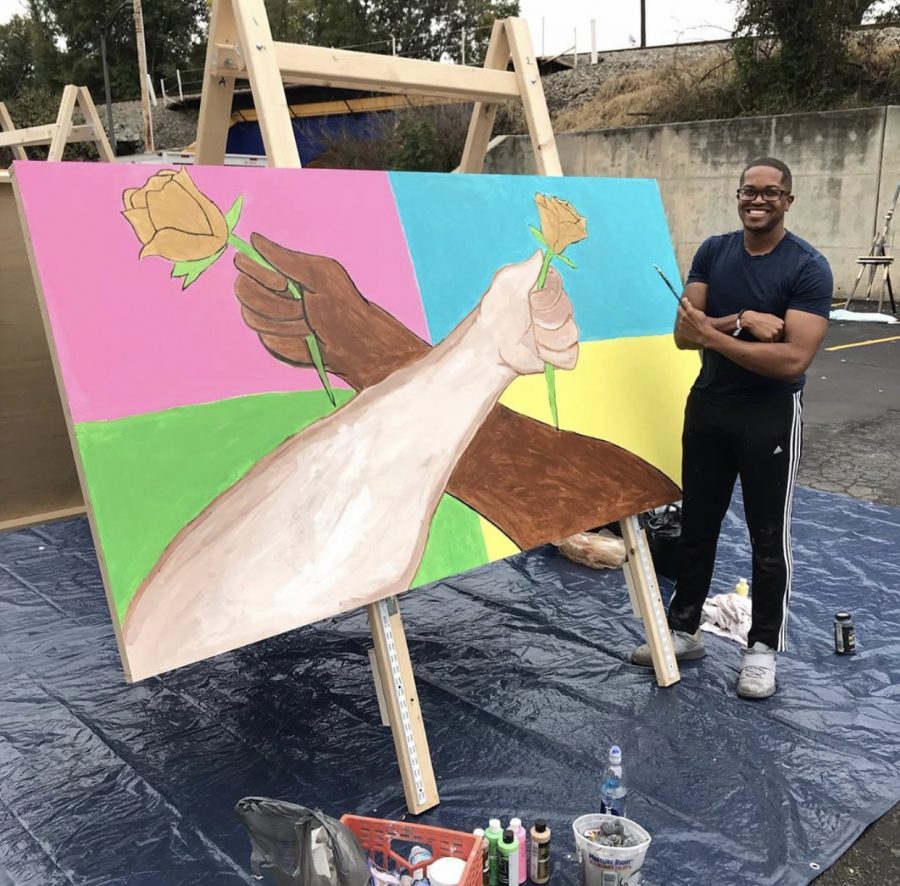 The nonprofit is heavily dedicated to creating art projects that will stimulate investment activity in the “northeastern” section of Greensboro, otherwise known as Uptown.

The art auction was an effort to fund future murals for public art projects in Greensboro’s urban communities. The artists would paint a mural on a 4×8’ panel live, for nearly five hours, as viewers could watch and bid on their paintings via Uptown Greensboro’s Facebook page. Bidding for these pieces started at $500 and would be sold to the highest bidders.

The event was heavily promoted through the Uptown Greensboro Instagram page, as flyers encouraged followers to tune in on Sept. 26 and support the auction. The event was initially set to happen on Sept. 12 but was rescheduled due to inclement weather.

Some of the artists featured were Emmanuel Mollette, Brandi Schmidt, Kenneth Brown and Littleton Ugliford III. A few of the artists expressed that they appreciated the opportunity to be a part of the auction and that they were able to bring awareness to revitalization projects for Uptown Greensboro.

“It was a great experience working with such talented artists,“ Brown said. “I’m also building my brand right now so this was good exposure for me as well.”

Schmidt says even though the mural fundraiser turned out great she still wishes local communities were more connected and supportive of the effort, but she understands it is difficult right now because of the COVID-19 pandemic.

“I think it is really important for our communities to stick together during this time,” Schmidt said. “But I really enjoyed being a part of this opportunity with Uptown Greensboro. I support the message behind it and their goals for the Uptown Greensboro community.”

Schmidt painted a beautiful canvas of a Black woman in black and white, smiling and twisting her afro hair as she is surrounded by a colorful, yellow background. She called the painting “Radiate Joy,” as the woman was painted to resemble the sun.

With the woman being drawn in black and white, while the background is vibrant and colorful, the painting is sending a powerful message by being reflective on how Black women still remain hopeful even through trying times. Brown says she got inspired by the current social climate of the Black Lives Matter movement and the tragic death of Breonna Taylor.

She had been involved in the Black Lives Matter mural paintings during the summer protests in Downtown Greensboro and wanted to continue to show her support of the Black community through her artwork.

“I realized [during the protests] that I could use my God-given talent with art to make a statement on the racial injustices people of color face within our communities,” Schmidt said.

Mollette has created some amazing artwork for the Greensboro community, as he was one of the few local artists who created the Black Lives Matter murals downtown. For the auction, Mollette painted a large black and white portrait of J.Cole next to the words, “Dreamville” taken from the name of the rap artist’s record label.

“J. Cole is one of my favorite artists,” Mollette said. “He is a big influence in hip-hop and black culture and I think because I had an opportunity to be able to show my artwork, I wanted to use that to give an ode to him.”

The event not only created more opportunities for local artists to showcase their artwork but for Uptown Greensboro to take a further step into reaching their goal. The auction bids will go solely towards their upcoming projects and ideas to build up Greensboro’s communities of color.

Joseph A. Wilkerson III, founder and director of Uptown Greensboro, created the organization in 2019 and has been passionate about making cultural progress in our local communities since he attended North Carolina A&T in 1988.

His passion began when he noticed how communities of color were not equally invested in compared to local downtown areas and central business districts.

Through numerous projects he plans to collaborate with local artists to invest in the beautification of pre-existing locations. He believes that bringing art into these spaces will attract new businesses and boost economic development in Uptown.

Wilkerson hopes that through his efforts Uptown Greensboro can establish a business improvement district (BID), as that would have a transformative impact on the revitalization of the Uptown community.

“When you talk about community development, a lot of times it will start off with a nonprofit that will join forces with other existing organizations, business leaders and the art community to work on redevelopment projects for the community,” Wilkerson said. “And that is exactly what I’m trying to do with Uptown Greensboro.”

Bids for the mural fundraiser event are still ongoing, as those who are interested in one of the pieces can send a private DM to the Uptown Greensboro Instagram page with an offer.

To keep up with Uptown Greensboro and their future projects, you can visit their website at www.uptowngso.org.