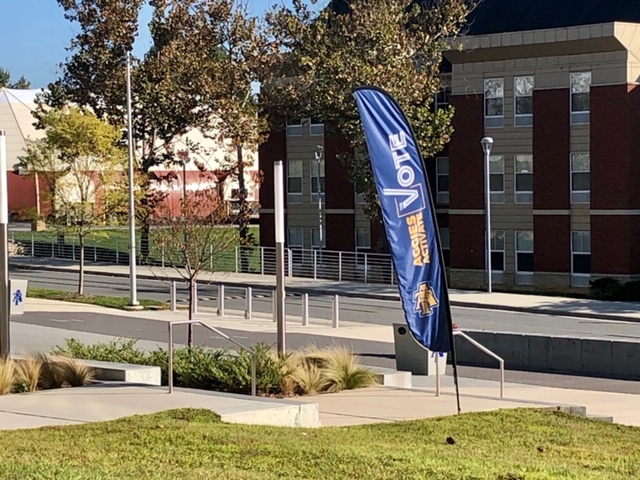 Young people have not been showing up to vote these past few years. No matter the election, whether it was a local election or a presidential election the youth voter turnout has been low.

Christopher-Sterling Lamb, sophomore meteorology and atmospheric science student, will be voting for the very first time. He is a believer in voting but does not see much change happening throughout the next presidential term.

“Voting is one of the many ways to contribute to change […] and I was excited to vote before,” said Lamb. “but now I am not because I now know how the voting system works and how it’s not just my vote counted but also the whole electoral college,”

Although Lamb feels like his vote does not matter, it is important that he votes because there always seems to be an attempt to take away the black vote.

N.C. A&T has held several events to help educate and motivate students to vote during this election. A few events the school hosted were a voter registration party the night before the last day to register, and multiple forums they held in the library in the spring of 2019.

Currently, the voting station at the Dudley building is open for early voting, and the campus has been promoting it through the Student Government Association and multiple other organizations on campus.

These events have spoken on how the black vote matters and they shined a light on many people who have fought and lost their lives in order for black people to vote.

Brett Powell Jr., a senior agricultural business student, will be voting for his first presidential election. He feels like this election is more important than the last one.

“I feel like this one is more important because we have seen what bad leadership in the White House can do to our country, so we need to change that,” said Powell. “I feel this election is very pivotal for our country and voting is just my part to voice my opinion on the leaders in this country.”

He states that he has always been an advocate for voting because of the history surrounding black voters, and how there was always an attempt to take their votes away.

“I have always thought voting was important because of what our ancestors had to go through to get the right to vote,” said Powell.

Outside of campus organizations, there are sports teams and individual students that are doing their part to spread the word on voting.

Sports teams have rallied together to be registered for early voting, and students have stood outside of the student center speaking on the importance of voting.

The last day to vote is November 3rd, and the president of the United States will be announced that evening.