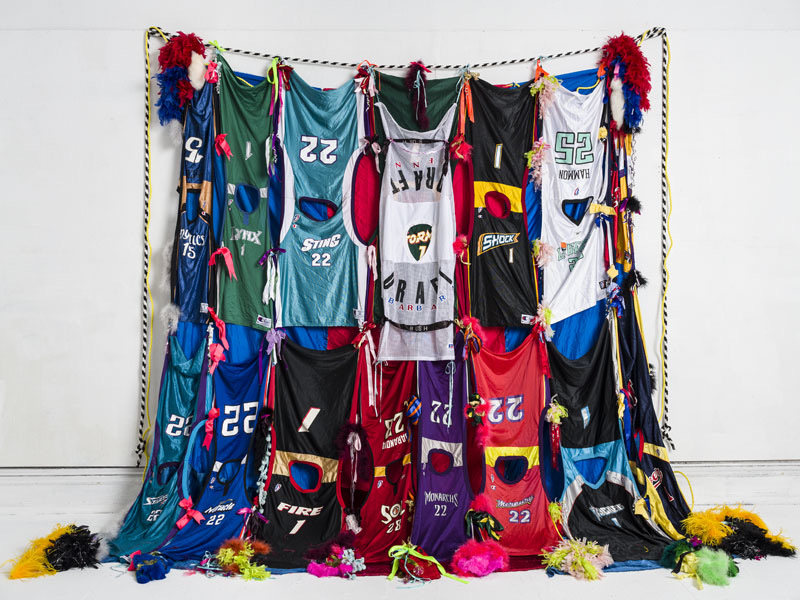 The UNCG Weatherspoon Art Museum has been showing the art exhibition, To the Hoop: Basketball and Contemporary Art. The exhibit shows how basketball’s foundation can be found in many elements of contemporary art and culture.

Just under 30 artists have contributed their works to help convey how race dynamics and socioeconomic standings can be seen through an overlap of this beloved game.

The works of Bill Bamberger, Janet Biggs, Jeff Koons, Nari Ward, Brian Jungen and David Hammons all contribute to the unique nature of this exhibit. These artists have never collaborated before, resulting in a new artistic experience for their audiences.

Museum visitors are able to see how basketball and contemporary art have collided through the lens of ceramic rims, colorful walls filled with jerseys and basketball pyramids. Dr. Emily Stamey, the curator of exhibitions at Weatherspoon Art Museum, brings an exciting storytelling experience to the Greensboro community.

Stamey’s imagination about the exhibit began when she viewed artwork from Jeff Koons’ One Ball Total Equilibrium Tank, based on the Spalding Dr. J Silver Series and David Hammons’ Higher Goals.

Koons’ take on how basketball creates a worldwide space of equilibrium is seen through a piece he created, by putting a basketball in the center of a glass tank filled with water standing on a metal structure. Hammons’ Higher Goals is a public art installation with five towering textured hoops with elements of nature wrapping around each one.

As Stamey matriculated through her graduate studies at the University of Kansas, she was constantly investigating how the strings of basketball culture are intertwined with the fabrics that make up contemporary art.

“Basketball and culture connect within many subsections,” Stamey said. “There is a true connection between power, economics, race, gender and human aspirations.”

She believes the game of basketball provides a diverse space with its correlation to culture, shown through its beginnings of gyms in small town urban playgrounds. She says ideas for making basketball more mainstream began to be looked at under a microscope, once outsiders saw its influence and franchising potential.

The evolution of basketball can be seen through the visuals that the exhibit shows. To curate the showcase, Stamey needed to partner with over two dozen artists. The partnerships initially did not bring any alarming difficulties, but as the project went on, museum logistics, wholesaler coordination and the magnitude of displays became challenges.

“The biggest obstacle while planning was narrowing down what would actually be in the exhibit,” Stamey said. “All around the world, there are so many contemporary art pieces centered around basketball, but it was important to just stay focused on the true essence of the exhibit.”

All of the pieces from the exhibit are unique in their own way, but for Stamey, the large basketball pyramid was her biggest task but also her biggest joy.

“The large basketball pyramid is made of 650 basketballs,” Stamey said. “Each basketball had to be inflated individually. The wholesaler that we chose is based in China, and they are currently experiencing changes, which caused some challenges [as well].”

After long nights and precise planning, Stamey was finally able to show her newest creation to the world. At this moment, she was consumed with gratitude for the university and basketball community.

“Out of the entire process, opening night was the most gratifying part,” Stamey said. “There was a large turnout, which showed me the exhibit was truly resonating with people. During opening night, people wore their favorite basketball jerseys and discussed their favorite memories.

She continues, “[I believe] the exhibit showed a deep human connection. Regardless if people actually enjoy the game of basketball or not, everyone has a connection to basketball being deeply embedded in our culture.”

Kimberly Holton, an N.C. A&T visual arts alumna, is excited to see the progress that North Carolina universities have made regarding exposing non-art majors to future career experiences.

“The [To the Hoop] art exhibit could be one of the greatest displays a university has ever seen,” Holton said. “I am so happy that students do not have to go all the way to places like Washington D.C. to receive examples of great works. Now it’s right in their backyard.”

The location of this exhibit, being in Greensboro, also aligns with the highly anticipated NCAA Men’s Basketball Tournament that used to call this city their home for the past few years.

The exhibit is open to the public until Nov. 22 and is located on the second floor of the Bob and Lissa Shelley McDowell Gallery and Gallery 6 in the museum.

Due to a small capacity limit, there is a virtual catalog available for those who can not visit the exhibit in-person. The virtual catalog also gives art lovers that are not local the chance to embark on this art experience with curator Dr. Stamey.

More information about the To the Hoop: Basketball and Contemporary Art exhibit and virtual catalog can be found on the Weatherspoon Art Museum website.