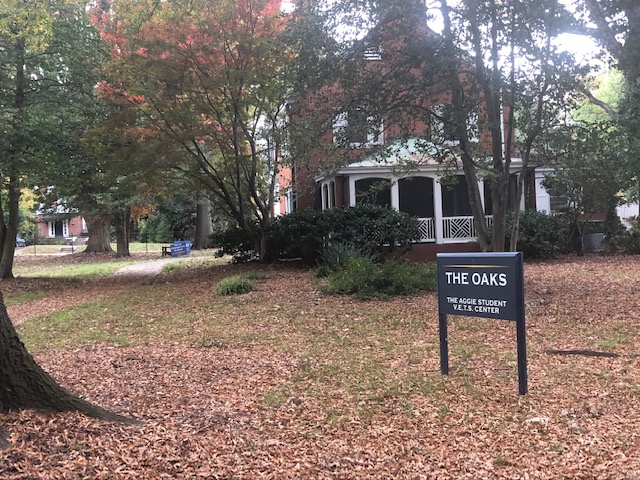 The Office of Veteran and Military Affairs (OVMA) department is housed at the Aggie Student V.E.T.S. Center; a resource for student veterans and dependents of veterans to process educational benefits and connect with N.C. A&T’s veteran community.

Since 2014, The Aggie Student V.E.T.S Center has been located at the Oaks; it is across from the A&T Four statue and resembles a house. The Oaks used to be a residence place for past chancellors and presidents of the university. Initially, the school offered veterans and disabilities services at the basement of Murphy Hall in 1974.

N.C. A&T was the first UNC system school to have an on-campus building designated to serve student veterans.

Maurtisha Thomas, University Veterans Affairs Certifying Official, represents the U.S. Department of Veterans Affairs. She is responsible for processing educational benefits for veterans and ensures that N.C. A&T receives funding under this department. Thomas stated the amount of funding that goes towards the OVMA.

“We bring in about $1.8 million dollars every academic year; from summer I till summer II of the next year,” Thomas said.

This year, the Aggie V.E.T.S. Center celebrated Veterans day with a Grab-n-Go breakfast, lunch and a gift for those that show their Military ID. Traditionally, Veterans day was celebrated during a football game by acknowledging all branches and veterans on the field. To show appreciation, student veterans and veterans around the area are given a discounted football ticket. During this specific game, the Aggie V.E.T.S. Center would tailgate and give out free food towards the special population. Throughout the week, different competitive events would take place to engage their community.

Shatoria Reid, Veterans Coordinator and Certifying Official , oversees internal and external events related to the Center and the veterans community. She has built relationships with many recruiters in Greensboro. According to Lieutenant Colonel Joshua Jones, Director of Veterans and Military Affairs, he detailed the amount of students that Reid and Thomas manage per semester.

“Typically, especially now with COVID-19, between the two of them [Reid and Thomas], they manage about 500 students per semester,” said Lieutenant Colonel Jones.

Before the pandemic, student veterans were welcomed to congregate at the Aggie V.E.T.S. Center and gave complimentary snacks. If needed, students could take a nap in the facility. Sponsors would host lunch sessions for students to attend workshops and prepare for job fairs,

During the spring semester, the V.E.T.S. Center would have a resource fair of various companies looking specifically for military affiliated students. The event would have food trucks at the facility and have free food for the first 500-600 students. Anyone that is looking to hire military affiliated students, the Center passes the company’s information to veteran students. According to Thomas, Lieutenant Colonel Jones is working on several grants to highlight this special population.

Since 2013, N.C. A&T has been recognized as a military-friendly school. Lieutenant Colonel Jones’ main concern is to stay competitive so veterans and dependents of veterans continue to come to N.C. A&T because of the services offered at the Aggie Student V.E.T.S. Center.

“If we do not do our part, the 1.8 million dollars goes away where military affiliated students would not be able to attend N.C. A&T,” said Lieutenant Colonel Jones.

In the Spring, The V.E.T.S. Center plans to launch their Green Zone Training. This training will  educate faculty and staff on how to be prepared for students that are deployed or on active duty. Lieutenant Colonel Jones emphasizes how the V.E.T.S. center is an advocate for military affiliated students.

“If we have a student veteran that may run into housing challenges, we have partnerships to help them get housing. We are a conduit to ensure we connect them to every resource possible that is available to them,” said Lieutenant Colonel Jones.

Due to the pandemic, all paperwork is through a portal for students to make requests to meet with staff members. Staff members can be reached via zoom and in-person. The Aggie V.E.T.S. Center has walk-in appointments on Wednesdays from 10 a.m – 3 p.m. For more information, please visit their website.