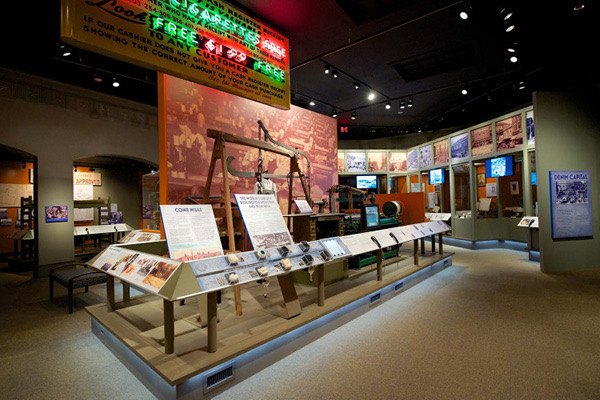 The Voices of a City exhibit at the Greensboro History Museum. Photo Courtesy of the museum.

The Greensboro History Museum opened on Nov. 11 to honor local veterans. The museum features the Voices of a City: Service and Sacrifice gallery, dedicated to veterans’ service and contributions to Greensboro and Guilford County for over centuries.

The day also made it 95 years since the museum first opened to the public on Nov. 11, 1925, according to Yes! Weekly.

The gallery features artifacts from Greensboro veterans from the War of 1812 to the Afghanistan and Iraq war. The weaponry, uniforms, letters and portraits of local soldiers fill the glass cases, along with plaques for guests to read that tell how the specific war affected the city and the story behind the artifacts.

Artifacts like the medical bag from Dr. Elmer Dellinger, a black physician and educator during the Spanish-American war in 1898, organized a volunteer unit that became part of the state’s first permanent unit of black officers. He taught chemistry at the Agricultural and Mechanical college, which is now North Carolina A&T State University.

The brass bugle, or trumpet of Robert Lee Campbell, World War I veteran and N.C A&T professor, is shown once you reach the end of the Voices of a City: Service and Sacrifice exhibit.

One of the first black officers in the Great War, Campbell, was awarded the Distinguished Service Cross for bravery under fire while serving in France in 1918. After his service, he taught mechanical engineering at what is now N.C. A&T and became the first professor of military science.

The bugle was used in local parades and memorial services by the African American Legion and the Veterans of Foreign Wars bands up until the 1950s, according to the exhibit’s listed facts. The bugle was donated from the Office of the Chancellor at North Carolina A&T State University and was conserved as part of the museum’s Adopt a Object program in 2014.

The story of Tuskegee Airman, Andrew Johnson, a Dudley High School graduate that went on to become a second lieutenant in World War II, is also featured in the gallery. After retiring as a lieutenant colonel, he taught the ROTC program at his alma mater.

The museum usually opens every year to celebrate Veteran’s day, as the exhibit brings many visitors who want to learn about their local heroes.

Carol Ghiorsi Hart, anthropologist and director of the Greensboro History Museum, says that during times like this, this is the perfect day to come together.

“It’s nice to have those days in the year that you stop for a minute and reflect and honor those who served our country. Today [was] certainly one of those days,” Hart said.

She says since they are a city-facility, they were supposed to be closed, but the museum staff asked for permission to be open to give local visitors an opportunity to reflect on the services and sacrifices made by veterans to serve our community.

“I think people [on Veteran’s Day] do think about history and the past, and they want to go to a museum sometimes just to have an opportunity to think back, remember and reflect,” Hart said.

Rodney Dawson, curator of Education at the Greensboro History Museum, says that hopefully people could take the time to understand the sacrifices veterans have made to protect the country through the exhibit. Dawson is a veteran himself, as he served in the Persian Gulf War from 1989-92.

“I think [certain] people should have a better understanding of the sacrifices many men and women make when they join [the service],” Dawson said. “Whether they go to combat or not, they are sacrificing lifestyles and giving up things for a period of time just to protect the country.”