Aggies’ thoughts on sports during the pandemic 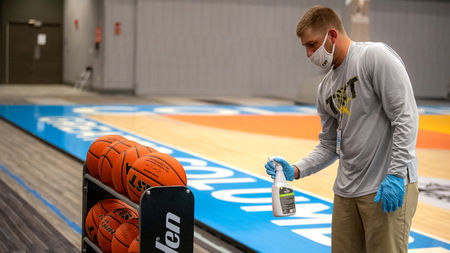 We are now eight months into this pandemic and with the return of collegiate and professional sports, fans still believe there’s still something off about these new seasons.

Due to COVID-19 protocols, we’ve seen a lot of changes be made to sports facilities to keep athletes and team officials safe. Rules such as limited fans, social distancing during interviews and strict mask-wearing requirements have all been placed so that sports can continue during these circumstances.

Last summer with the NBA bubble, we got our first glimpse of how games are going to be operated with no attendance. However, though it was a great success most fans were not too fond of the no fan format claiming that it’s just not the same.

Looking at NFL & college football games it is very different seeing an abundance of empty seats around these extravagant stadiums. Especially in college football, because the chaotic student sections and die-hard crazed fans play a huge role in the overall experience.

Furthermore, seeing how the college football schedules were set up this season due to the pandemic, teams can still qualify for a bowl game and won’t require a .500 record. Not to mention, bowl games such as the Bahamas Bowl and Hawaii Bowl have been canceled because of the pandemic.

So that brings the question: will sports ever be “normal” again?

Titus Thorn, a junior information technology (IT) student at N.C. A&T is an IT intern for the Carolina Panthers. He believes the fan situation is a big deal-breaker for him.

“Sports feel forced at a time like this. It’s more to it than the actual game being played, it’s about the fans and the experience,” Thorn said. “It’s hard watching sports when the best opt-out or seeing nobody in the stands.”

Noah Avant, a senior journalism and mass communications student at N.C. A&T added that the stance athletes are taking with social issues in this country also plays a role in the dissimilarity of sports this year compared to previous years.

“It does seem like sports isn’t the same anymore,” Avant said. “When it comes to COVID, nothing is going to be ‘normal’ for a while but socially I feel like athletes are finally speaking up and doing what’s right as community leaders to make sure the world is staying safe.”

Just as much as this virus has affected the spectators, athletes all over are also heavily affected by this especially at the collegiate level.

Ana Olaya is a senior at N.C. A&T and is a member of the nationally-ranked women’s bowling team.

Before she was an Aggie, Olaya was a member of Colombia’s national youth team back at home.

She explained how quarantine was a great time to decompress, but bowling never really stopped for her.

“I would never get a break from bowling,” Olaya said. “As soon as I left college it was strictly team Colombia stuff.”

The Bowling team is the only sport at N.C. A&T staying in the Mid-Eastern Athletic Conference (MEAC) after the 2020-2021 season. Since their season is year-round and fall sports have been canceled they still do not know if they’ll be able to compete in the spring.

The NCAA has granted student-athletes another year of eligibility to void out this unorthodox season. For Olaya, it’s something she would like to do but considering she’s an international student it would not be easy.

“I would love to bowl another year at A&T and be with my teammates again. It all depends on landing a scholarship to help pay for one more year because it’s already a challenge when you’re dealing with an entirely different type of currency (pesos),” Olaya said.

Olaya believes that if everyone does their part in staying safe and always wearing a mask, we can see some level of normality back in our everyday lives.

The bowling team continues to practice with hopes that the MEAC allows for tournaments in 2021.