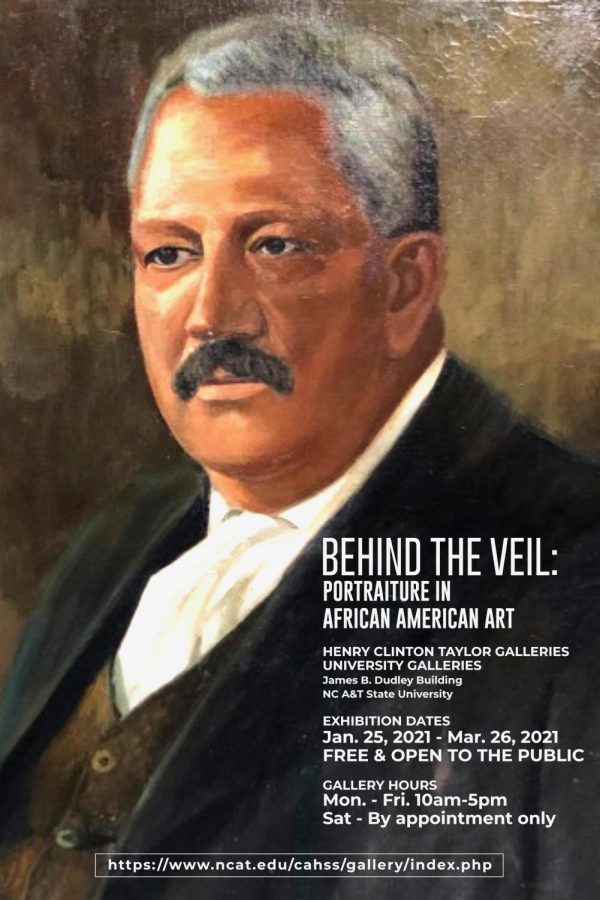 The University Galleries at N.C. A&T has opened its newest exhibition called Behind the Veil: Portraiture in African American Art—which shows a collection of classic portraiture from various art styles and mediums. The exhibit was created to bring recognition to Black artistry and showcase some of the artwork from the university’s permanent collection.

The portraits featured in the Behind the Veil exhibit are from a permanent collection of art from the H.C. Taylor Gallery—which features works by African American artists from the likes of Romare Bearden, Alma Thomas, Hale Woodruff, John Biggers and Varnette P. Honeywood. The gallery’s permanent collection has over 6,000 pieces of art, varying from African and African American art that has been collected for nearly the last 100 years.

The portraits chosen to be exhibited show Black art in various art forms, such as abstract, realism, oil painting and even photography. One of the portraits featured in the exhibit is of James B. Dudley, N.C. A&T’s second president from 1896-1925. The portrait was painted in 1940 by Henry Clinton Taylor—the namesake of the historic H.C. Taylor Gallery and the first art professor at N.C. A&T.

Taylor has two other portraits featured in the Behind the Veil exhibit as well—one of N.C. Central University founder James E. Shepard and Richard B. Harrison, a well renowned Black actor who taught theatre at N.C. A&T in the 1920s. The campus auditorium at A&T was also constructed in 1939 and named after the actor.

The 1996 collage painting by civil rights activist artist Benny Andrews entitled Diva is also another one of the important pieces shown in the exhibit. The painting has been highly regarded in the art community, as Andrews was a trailblazer for African American art becoming accepted and respected as much as mainstream art. The painting is a part of his music series, with other works of art entitled Death of Innocence, Rock and Hog Caller’s Blues.

University Galleries director Paul Baker says that with these exhibits, he wants the gallery to showcase Black art on the same level as other genres of art that are usually being displayed and exhibited. Wanting to create an exhibit that showcases some of the gallery’s art collection, he created the concept of a Black Art Matters and a Black portraiture exhibit.

The new exhibit follows the Black Art Matters: Works From the Permanent Collection exhibit that is still currently displayed at the University Galleries. The virtual exhibition highlights the significance of works by artists of the African Diaspora, with pieces spanning from the 1930s to early 2000s that show the vast diversity of subject and medium in Black art.

The Behind the Veil: Portraiture in African American Art exhibit will be open to the public until March 26, and after that the University Galleries will be showing a new exhibit featuring a major collection of art from a private donor. The collection will feature 28 works of art by Bryan Collier and Curtis James, known as one of the top African American children’s book illustrators, and will run for two months.

With Behind the Veil following the Black Art Matters exhibition, and February being Black History Month, visiting these exhibits during this time shows needed support of African American art and culture, and brings the opportunity to learn more about African American artists. Baker says the University Galleries offers a welcoming and social distance safe environment for those in the local community who want to discover N.C. A&T’s art collection.

“We are offering a safe space where people can come in, social distance and discover African American art,” Baker said.

Located in the James B. Dudley building, gallery hours are Monday through Friday from 10 a.m. to 5 p.m. and Saturdays by appointment only.