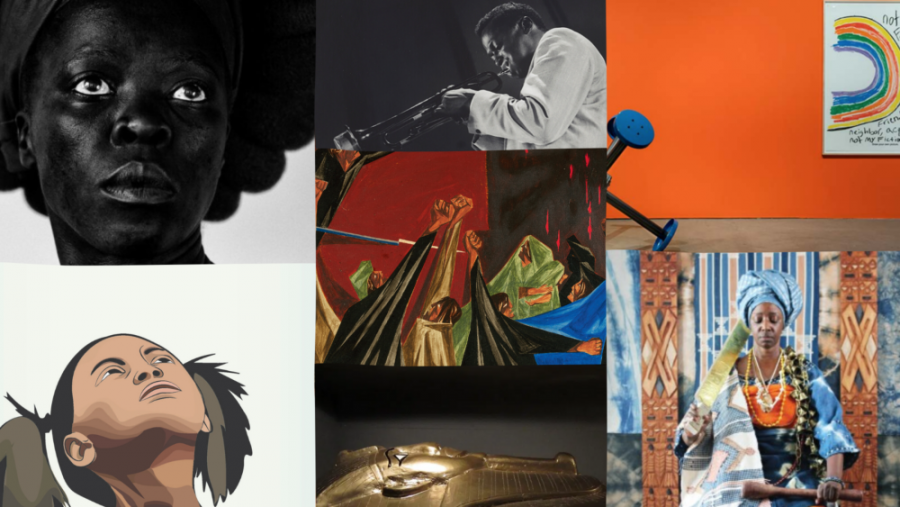 Photo Courtesy of The ARTery.

The month of February pays tribute to generations of African Americans and their too-often neglected accomplishments and contributions to society. This month is an opportunity to not only recognize their accomplishments but to also reflect on the painful experiences and events that have shaped Black history.

Though Black History Month notably honors those who strived to make a change in fighting against racism, such as civil rights leader Martin Luther King Jr., or those who have paved the way in American politics and leadership, such as Shirley Chisholm or Barack Obama, the month also celebrates those who made an impact in Black arts and culture—like 1970s neo-expressionist painter Jean-Michel Basquiat.

Listed below are a few virtual Black art exhibits to see for Black History Month and beyond.

The African American Art Exhibition at the Philadelphia Museum of Art is presenting a selection of artwork from their collection of over 1,400 pieces of art from over 250 Black artists. Some of these artists include Donald E. Camp, Faith Ringgold and Elizabeth Catlett.

One of the pieces featured is the Portrait of James Baldwin, 1945 by Beauford Delaney, a modernist painter who is known for his work with the Harlem Renaissance in the 1930s and 40s.

The works featured in the online exhibition reflect a wide range of individual expression from African American artists and are deeply intertwined with Black history in the U.S—from early colonial slavery, to the civil rights movement and to now in modern day history.

The curators of this exhibition were Gwendolyn DuBois Shaw, Associate Professor of American Art at the University of Pennsylvania and John Vick, Project Assistant Curator at the Philadelphia Museum of Art.

The Black History and Culture collection on the Google Arts and Culture site features galleries of photography, artifacts, artworks, music and much more that reflects the history, arts and culture of the Black experience in America.

There are many compiled collections featuring the works of Black artists, such as Black: a Color, a Material, a Concept, African American Art: Harlem Renaissance, Civil Rights Era, and Beyond, and Kara Walker’s “A Subtlety.”

Google Arts and Culture also gives access to online Black art exhibits from museums and art institutions from all over the country, such as Art by African Americans in the Museum of Fine Arts in Boston, The Hewitt Collection of African American Art, or ‘A Constellation’ at the Studio Museum in Harlem.

The Contemporary Art Gallery Online is celebrating Black History by highlighting emerging, modern day artists from around the world in their Black History Month Exhibition. Zienna Brissett, Leslie Anne Ikpe, Rudy Martin and Allegra Norris are a few of the artists featured in this exhibition.

Some of the art features are the How it Really Looks Series by Chicago visual artist Nicole Van Dyken, which are 9” x 11” digital collages that depict colorfully, yet deep images of American history and events. A lot of Van Dyken’s work is “meant to tell a story—and she enjoys taking even the most morbid tale and adding strength and hope to it through color,” according to the exhibit page.

This online exhibition shows over 25 artists that are painters, photographers, sculptors and digital creators. The exhibit will be archived after February and can still be viewed through their website.