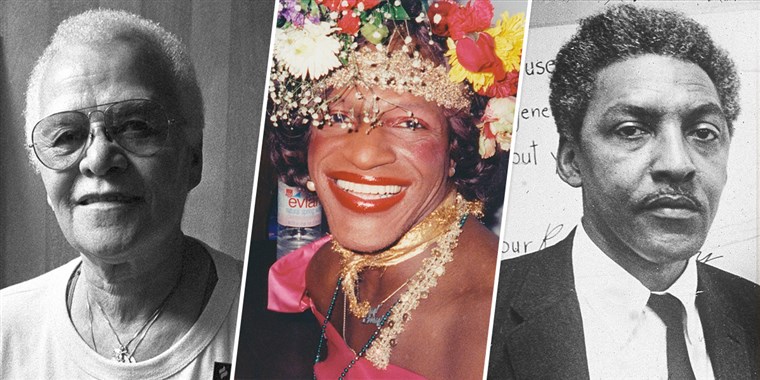 Though February is coming to an end, it doesn’t mean we shouldn’t continue to honor our nation’s Black LGBTQ+ icons after this month. Many Black LGBTQ+ leaders, writers, politicians and activists have paved the way for future generations to come knocking down barriers and challenging the social norms— and they most certainly deserve to be celebrated beyond Black History Month.

Listed below are a few Black LGBTQ+ Icons we should celebrate before Black History Month ends.

Baldwin was a novelist, essayist, playwright poet and social critic—and is considered to be one of the greatest writers of the 20th century, as well as a Black LGBTQ and literary icon. He would write passionately on the subject of race in America through his novels, essays and plays.

His 1974 novel, If Beale Street Could Talk was adapted into the 2018 film of the same name starring KiKi Layne, Stephen James and Regina King. The film follows a young Black woman in New York City who seeks to clear the name of her wrongly convicted lover.

Baldwin spent the majority of his literary career educating others about Black and queer identity, as well as speaking openly about same-sex relationships and writing several works featuring gay and bisexual characters.

One of the most prolific writers and lyricists of the 20th century, Lorde is a self-described “Black, lesbian, feminist, mother, poet, warrior,” who was central to many liberations, feminism, civil rights and Black cultural movements for several decades.

She made notable strides to confront the injustices of racism, sexism, classism, capitalism, heterosexualism and homophobia through her writing, teaching and activism. Her activism was deeply intersectional, as her early intersections of race, class and gender are found in essays such as “The Master’s Tools Will Not Dismantle the Master’s House.”

An educator, political activist, scholar and author, Davis is one the most recognized, prominent figures from the 1960-70s civil and social justice movements. She was a leader of the Communist Party USA in the 1960s and had close relations with the Black Panther Party, although she was never officially a party member.

She became known across the globe for her early 1970s trial on conspiracy, kidnapping and murder charges for her involvement with George Jackson, one of the Soledad Brothers who attempted to escape prison in Marin County, California on Aug. 7, 1970. She was held in jail for over a year before she was eventually acquitted of all charges by an all-white jury in June 1972.

In 1974, Davis published Angela Davis: An Autobiography, as well as Women, Race & Class (1981), Women, Culture and Politics (1989) and Blue Legacies and Black Feminism: Gertrude “Ma” Rainey, Bessie Smith and Billie Holiday (1998)—which focused on the queer identities of Black women like herself.

Currently, she is a distinguished emerita professor in the History of Consciousness and Feminist Studies Departments at the University of California, Santa Cruz.

After her term, she became a professor at the University of Texas in Austin as the Lyndon Johnson Chair in National Policy and taught in the LBJ School of Public Affairs until the early 1990s. In 1994, Jordan was awarded the Presidential Medal of Freedom by President Bill Clinton for her work as a political trailblazer.

While Jordan never publicly acknowledged her sexual orientation, she was open about her life partner Nancy Earl of nearly 30 years.

Rustin was an LGBTQ and civil rights activist best known for his role as a key advisor, mentor and “right-hand man” to Rev. Martin Luther King Jr. He is credited for laying the blueprint for Dr. King’s philosophy of pacifism and nonviolent resistance.

He organized the March on Washington in August 1963—which was regarded as one the largest non-violent protests ever held in the U.S and is where King delivered his most famous address, “I Have A Dream.” There were more than 200,000 people from the steps of the Lincoln Memorial, marking the 100-year anniversary of Lincoln’s delivery of the Gettysburg Address.

“Rustin [organized] this march in an eight-week period, without cell phones, without email, without faxes. So he and his team [were] working the phones heard, they [were] typing letters constantly,” says Michael G. Long, editor of I Must Resist: Bayard Rustin’s Life in Letters and co-author of Bayard Rustin: The Invisible Activist.

After his 1953 arrest on a morals charge and facing discrimination from within the Black community, such as threats from Black Congressman Adam Clayton Powell— who used Rustin’s sexuality against him to threaten King into not protesting the 1960 Democratic National Convention, Rustin began to advocate for gay rights after facing constant discrimination for his sexuality.

He was eventually awarded the Presidential Medal of Freedom by President Barack Obama, the nation’s highest civilian honor, for his activism posthumously in 2013.

Hansberry was a playwright and writer and was the first African American female writer to have her play, A Raisin in the Sun, performed on Broadway. The play highlights the lives of a struggling Black family dealing with racial segregation in Chicago.

A Raisin in the Sun is considered a classic and has continued to find new audiences throughout the decades, with several adaptations including the 1961 film version starring Sidney Poitier. At age 29, she was the first Black playwright and the youngest American to win a New York Critics Circle Award.

The 2018 PBS documentary entitled Lorraine Hansberry: Sighted Eyes/Feeling Heart examined the playwright’s life and how she was afraid of revealing her true sexuality as a Black woman in her era.

Jenkins is a politician, writer-poet and transgender activist who made American history in November 2017 when she became the first openly transgender Black woman elected to public office in the U.S.

She was one of two openly trans people to win a seat on the Minneapolis City Council in 2017 as well, according to NBC News. She serves a Vice President in addition to representing Ward 8. She also currently serves as the oral historian for the Transgender Oral History Project at the University of Minnesota Libraries.

She is a published poet, being the author of The T is Not Silent: New and Selected Poems as well as a contributor to Queer Voices: Poetry, Prose and Pride, A Good Times for the Truth: Race in Minnesota and Blues Vision: African American Writing from Minnesota.