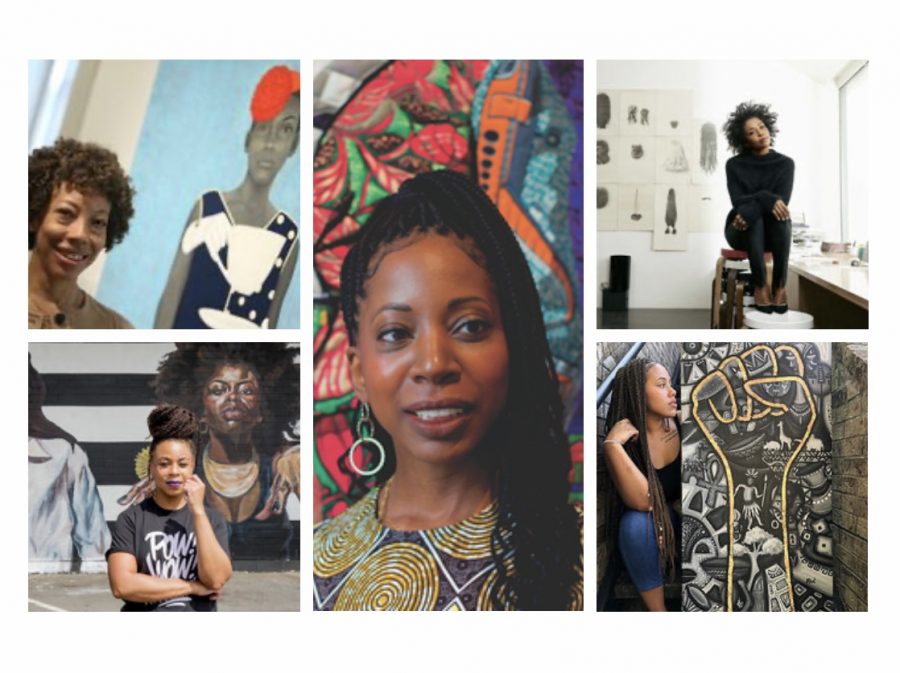 Over the past century, Black artists have been fighting for representation and recognition for their contributions to American culture and society. For Black women artists, this fight was even harder, with the intersectionality of racism and sexism being present. Undeterred by obstacles they faced, artists and trailblazers Faith Ringgold, Alma Thomas and Emma Amos paved the way for women artists of color.

This Women’s History Month and beyond, take a moment to give recognition to all Black women artists that are helping to shape American culture.

Listed below are five Black women artists that are creating thought-provoking pieces depicting both the plight and beauty of the Black experience.

Hailing from New Jersey, Howard alum Bisa Butler is using her quilts to depict African American pride and beauty. Growing up with an African American mother and a Ghanaian father, Butler was exposed to art all throughout her childhood and pursued her love of art at Howard University.

At Howard, Butler was introduced to her medium by her professor Al Smith who suggested that she create artwork that looked more like how [she] dressed. And that she did. Seeking inspiration first from her own family’s photo albums, and later vintage photos of Black people, Butler began using her medium to “humanize” the people she was depicting.

Using layering, and bright “kool-aid” colors (which she was introduced to through her Howard professors), her tapestries are brought to life. Butler’s exhibition ‘Bisa Butler: Portraits’ is currently on display by The Art Institute of Chicago and can be viewed virtually on their website.

Portraiture artist Amy Sherald rose to prominence in 2018 after the unveiling of her portrait of former First Lady Michelle Obama. Before painting Mrs. Obama, Sherald’s work has been displayed globally since she graduated from Clark-Atlanta University in 1997.

Exclusively painting Black people in grayscale, Sherald uses her portraits to illustrate “Black people being black.” Sherald captures this through her life-size paintings that depict her figures as archetypes “represent[ing] something that’s bigger than who they are as an individual and that they are “archetypes that know they are present.”

When looking at her portraits, it can be hard to ignore the gaze of her subjects—which is intentional. The gaze of the figures she paints is a response to a lot of images [she] saw growing up where our gaze was always averted and she reclaims the gaze of her Black figures and empowers them. You can find Amy Sherald and her artwork on her Instagram and website.

“I am using my art to create social change by making public arts with specific messages.”

Fine artist, illustrator, and muralist Sydney G. James’ artwork are designed to start conversations and bring about social change. James’ work is mainly focused on the racial and gender positioning of the black woman in America.

James illustrates these themes on a smaller scale such as her standard-sized paintings to vast murals in her hometown of Detroit. Over the past couple of years, James has gained traction throughout Southeast Michigan and the United States for her murals commenting on the Black American experience.

Photography-based artist Tawny Chatmon is reimagining artwork and portraits she saw as a child and is instead using subjects that [are] often under-celebrated. As a child, Chatmon was exposed to various cultures during her travels with her military family which contributed to her love for art.

Her inspirations for her pieces include the Vienna Secession and the Renaissance. Using her photographs as a base, Chatmon then uses the layering of paint and other materials to create her work. Chatmon’s main subject is the beauty of Black childhood, which began with her own children.

Chatmon has worked commercially but has made a purpose to pursue projects that ‘drive’ her and hold personal meaning. Tawny Chatmon and her work can be found on her Instagram and website.

“Love the work, hate the work. You have to reckon the work.” Are the words of associate professor Sarah Lewis while speaking on silhouettist, print-maker, and installation artist Kara Walker. Shortly after graduating with her master’s degree from Rhode Island School of Design in the mid-1990s, Walker began gaining traction for her ‘controversial’ works.

In her art, Walker attacks the themes of race, gender, sexuality and the exploitation of Black bodies. While attacking those topics, she exposes the brutality and violence within all of those themes. Speaking on her work, Walker says, “I’m not trying to drop a bomb on the public necessarily, but—I sometimes think the work does have that impact.”

Since her debut at the Drawing Center in 1994, Walker’s work has been stirring conversation both in and out of the art community. Kara Walker and her work can be found on her Instagram and her website.