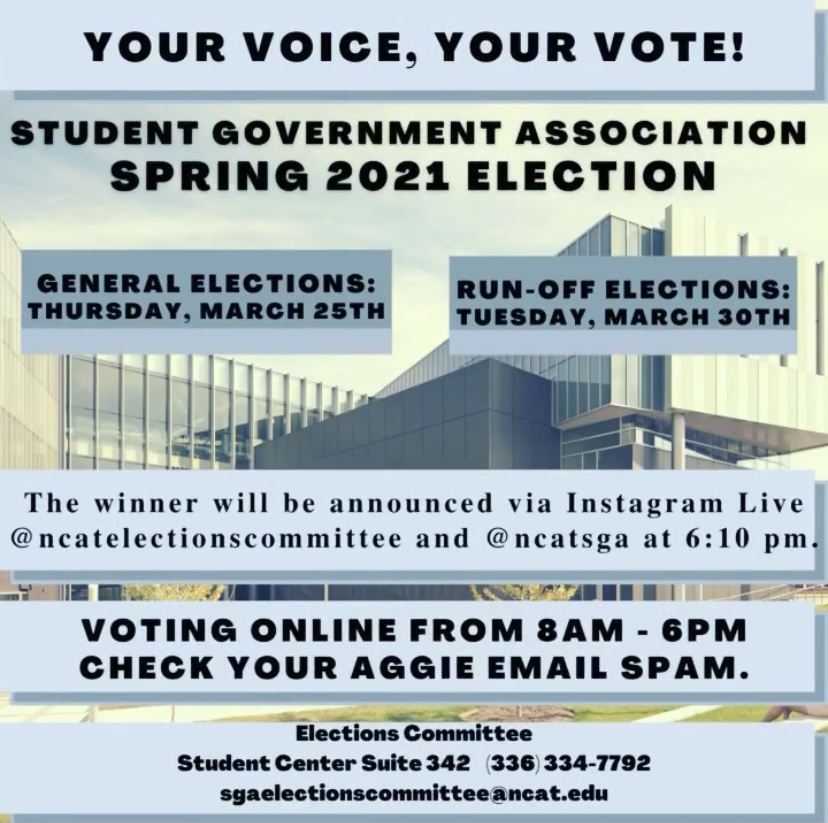 The Student Government Association Executive Forum Presidential debate was held last week where candidates for SGA executive board positions were able to talk about their vision for N.C. A&T’s future and answer critical questions about why they should be elected.

The two candidates have completely different platforms however, they are focused on building an agenda to improve student engagement on campus, and this is what Lance Davis has to say.

Running on the campaign ‘Sharing the Soul of A&T’ Davis’ one of Davis’ goals is to help students build relationships among their peers and faculty.  “As a part of Preeminence 2023, A&T plans on increasing our non-African American percentage to 30%. With this influx of people from diverse backgrounds, the students must share the culture that A&T cherishes and grow it in the face of change.”

Davis wants students to understand that preserving and strengthening the culture of N.C.  A&T will be at the forefront of all his actions as SGA President. Especially since the university is expecting to return to regular protocol for the Fall 2021 semester, so he wants students to have a great experience for this long-awaited return to campus.

Julius is highly motivated to push students to realize that they are a part of the Student Government Association. He is aiming to have an administration for students because bringing forth change on N.C. A&T’s campus takes a collective effort. When the people are actively involved oncampus, they can better advocate social issues in student government.

Runing on the platform ‘A Promised Land’, Julius wants to redefine the idea of HBCUs and their relevance to the African American community.  “HBCUs continue to serve as pillars within the black community, contribute to the struggles of African Americans within this country, and increase access to higher education,” said Julius. “With my platform, I aim for the Student Government Association to do work that builds upon the rich legacy of being a catalyst for change within African American communities. Through community, advocacy & mobilization, and organizing, we can do meaningful work on this campus and in our community that brings forth radical transformation.”

Based on the problems that students have expressed or discussed with SGA, both candidates have decided to focus on the issues that they deemed important to the campus community.

“As stated before, students are concerned about A&T increasing our non-African American populations,” Davis said. “HBCUs have been a safe place for black people for decades upon decades, and diversifying them is a controversial subject. I know that despite anything that happens, we must keep A&T a high-spirited, fun, and family-focused HBCU,”

Julius explained that during thsi time on campus often students have expressed that they do not feel heard or represented. “My main goal is to provide opportunities for EACH student to advocate and organize around issues that are meaningful to the student body and local community… When everyone is advocating and organizing together, we can accomplish any and all things,” said Julius.

The general election will take place on March 25th, and the runoff election will be on March 30th. Voting will be available online from 8 a.m. to 6 p.m. The Office of Student Development is responsible for sending the election link through students’ email.

Here below are the candidates and the position they are running for: