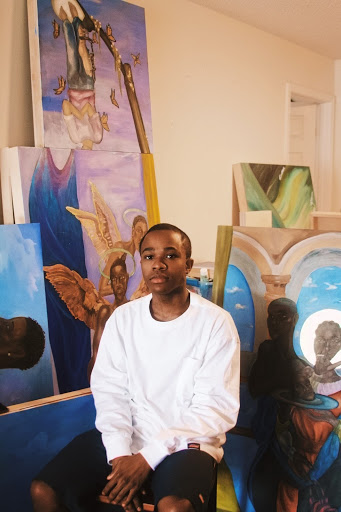 For over the past two years, N.C. A&T senior visual arts student and artist Robert Hudson has been planning and creating his pop-up art show entitled, HEAR ME OUT, SON. The show is a cultural experience featuring 26 artists and dancers and a musical ensemble along with a few surprises. HEAR ME OUT, SON marks Hudson’s sixth show and is what he refers to as his N.C. A&T ‘legacy show.’

The centerpiece of Hudson’s show is a 105 piece painting that stands at over 20 ft tall. His inspirations for the painting are Tintoretto’s Coronation of the Virgin (Paradis), and his relationship with his family. With his painting as the backdrop, Hudson uses music and choreography to bring his vision to light. Starting with “Algorhythm” by Childish Gambino, Hudson depicts conversations between father and son, mother and son, and about spiritual realization—while providing tributes to loved ones through music and choreography.

Hudson’s love and appreciation for art began long before he came to N.C. A&T. In junior high, he would just “sit back [in class] and draw what was in front of [him].” From that point, Hudson began to hone his skills and use them to express thoughts and feelings that were difficult to convey as one of few Black people at his school.

Speaking on his love for art, he says, “I began to fall in love with [creating art]. I have a connection with my artwork that is not easy to put into words…”

His connection with his artwork has been evident from a young age. At age 14, Hudson created a piece entitled “Society Closes Our Mouth,” which centered around 9/11, police brutality, the murder of Trayvon Martin and the silencing of Black Americans. His piece provides social commentary from the perspective of a young Black man in America, as they are so often silenced.

Hudson has continued his artistic journey at N.C. A&T, and is known among students for sketching and painting around campus. As a freshman, he would often sketch in the Aggie Dome—and even gained the moniker “The Kid From the Dome,” which is also the name of his first solo exhibition that took place in 2018. By creating art around campus and hosting solo exhibitions, Hudson has been solidifying his legacy as a premier artist at A&T.

When speaking about his legacy, Hudson says he wants, “People to be able to see themselves in my work. I want them to feel seen.”

Hudson’s pop-up show HEAR ME OUT, SON is open from 5-10 p.m. on April 2, 2021. You can also find and support Hudson’s artwork via his Instagram page and website.