N.C. A&T student Richard Newkirk’s new art show is the first of many 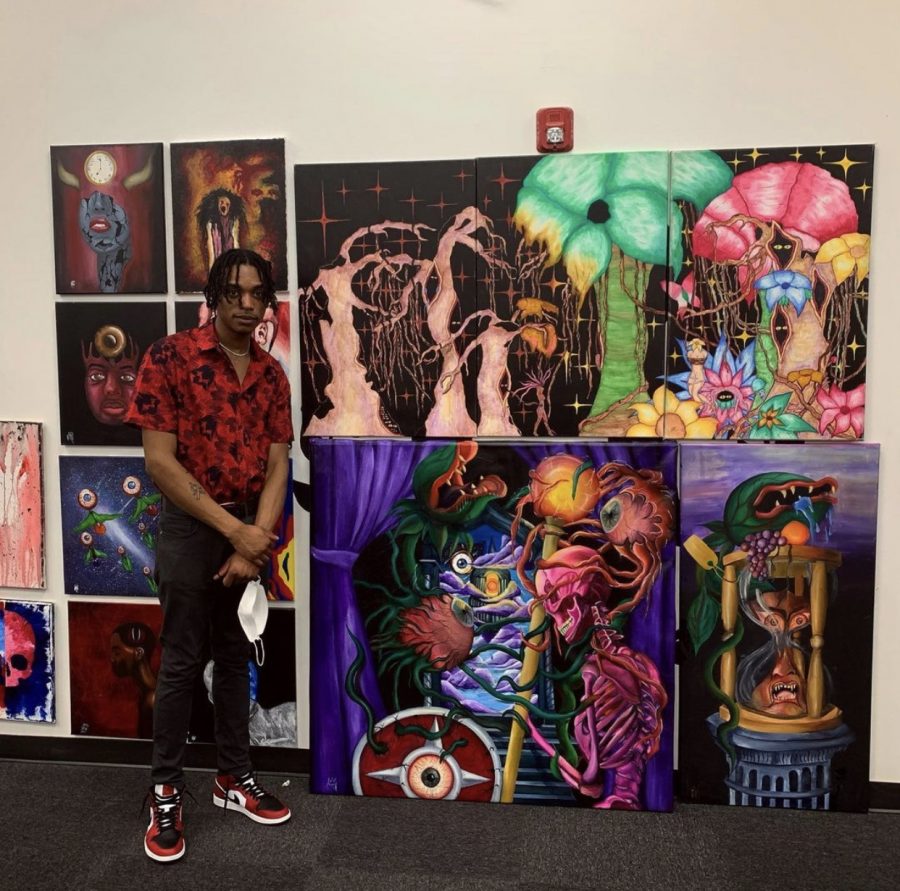 Now that the COVID-19 vaccine is rolling out, we can now hope to see more in-person art shows, exhibitions and events happening soon. Taking advantage of this fresh opportunity to host a live event, N.C. A&T senior visual arts student Richard Newkirk hosted his first-ever art show called What Do You See When You Close Your Eyes? The event took place on April 11 at the Renaissance Event Center in Greensboro.

Featuring many talented performers, creatives and artists like himself from N.C. A&T, the event sought to “unleash the creative mind.” Newkirk says he has had the project in the works for about two years now, as he was inspired to put together a showcase after being invited to his first art show by another fellow artist, N.C. A&T senior visual arts student Robert Hudson, also known as his pen name Robert Xavier. He was later featured in one of Hudson’s art shows just over a year ago, and shortly after that experience, he began thinking of how he would individually express his artistic voice.

“It was amazing, and it inspired me to find my voice because I saw that he had his,” Newkirk said. “So after that, I was just like, ‘Alright, what do I want to talk about? What do I want to say?’ And then, after coming to the realization that a lot of my paintings reminded me of my dreams or thoughts, I was like, okay what do other people see when their eyes are closed?”

After thinking of the theme behind the show and his own art, he began working on the main piece of the show, called The Eyes That Watch, While Paradise Falls. The surrealist artist says that that piece is one of his most detailed pieces to date, and that it is the kind of piece that he really needed to make the show one of a kind, and hopefully one of many.

“I decided to start working on this really big piece,” Newkirk said. “And I was really focused at that time on interpreting my own thoughts on a deeper level.”

When putting the show together over these past couple of years, Newkirk says he did face a few challenges along the way, such as finding a venue due to COVID-19 restrictions. During the beginning, when COVID was at its peak, it was hard to find a venue that would book a live event—but once vaccines started to become available to everyone, it officially opened the door for him to finally host his art show.

“With COVID, there’s a lot of hoops you have to jump through right now,” Newkirk said. “It would have been a lot easier if I had started looking for a venue when the vaccine was rolling out, but I started looking before there was even talk of a vaccine. But once it was announced that vaccines were out, I got a call back saying there was a space available. So COVID-19 is probably the craziest thing I’ve had to deal with this whole time.”

A few of the creatives featured in the show from N.C. A&T was Hudson, senior biological engineering student and creator of 3IRD EYE Art Amir Barnett, senior journalism student artists Nazir Sims and Damien Bell and junior journalism student Arial Robinson—author of The Modern Day Black Alphabet Book and Black Hair Care in Color. As a featured artist and one of the performers for the event, alongside Sims and Bell, Robinson says that the experience was unlike any other.

“The show was super magical,” Robinson said. “A room filled with so many diverse and talented people right here in Greensboro. When we close our eyes, we all see different things, and to be able to translate that through art and share it with others is so inspiring. I am super glad that I got to share my art with others and give them a peek of what I see when I close my eyes.”

When reflecting on the art show, Newkirk says the show went “10 times better than expected.” From the beginning, he was constantly worried about if he did enough promotion for the show or if he got the word out to the right people, but once he saw the response he was getting at the show, and saw how everyone was interacting and enjoying each other’s presence and the featured art and performances, he came to the conclusion that everything worked out.

“I really can’t thank the people that were a part of the art show with me enough, because they are really what made it,” Newkirk said. “I mean, sure I had my art. But the fact that all the performers and artists came through, it made it a community event. I love each and every one of them and what they bring to the table.”

The message that he hopes everyone took away from the What Do You See When You Close Your Eyes art show is to, “not be afraid to have a voice, and to be confident in your craft.” As an artist, he wants people to know that he’s the type of artist that would never judge how someone creates their art—and that if you are putting in the work to create, then you are working towards creating good works.

“The message that I hope people got, and I hope people understand is that it’s okay to have a voice,” Newkirk said. “I want people to remember that if you have something to say, and you want to say it, then do that. Nobody can criticize you for having a voice. I also want people to know that I’m not a conventional artist. I wouldn’t tell somebody that how they’re doing art is wrong. If you’re creating and you are proud of your creations, then you are creating good works.”

He also urges people to give others proper recognition when it comes to their artistry, as he says, “If you see somebody that’s doing something that you admire, I really want to urge you to tell them that, because a lot of people will like your artwork or creative goals in silence or from a distance. I say this because I want people to have their flowers. So always give people their flowers.”

Newkirk already has part two of the What Do You See When You Close Your Eyes art show in the works and will be coming soon—possibly by August or September. To keep up with Newkirk and his creative endeavors, you can visit his Instagram and Twitter pages. You can also visit his website.