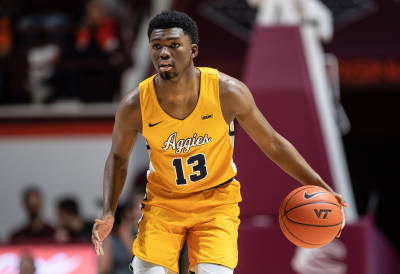 Monumental changes have come into place with the NCAA and endorsements. The NCAA rules changes and state laws that went into effect on July 1st created opportunities for college athletes to sell the rights to their names and image for the first time.

This is an important change because collegiate athletes missed out on huge opportunities to make money like the Fab Five in previous years. Some athletes like Reggie Bush were robbed of the Heisman trophy due to money being dealt with in his career.

I had the opportunity to sit down with A&T’s all-time assist leader Kam Langley about the importance of this new rule change.

Langley entering his last year as a collegiate athlete believes it took the NCAA long enough to make this official.

“It’s about time. I think athletes before had a better opportunity than athletes now. This is a great opportunity for athletes to make some money, get their name out there and show how to be businessmen and pros before actually being a pro,” Langley said.

A lot of athletes did not waste any time with the new opportunity. Langley and his team have already jumped onto things but are being safe and aware at the same time.

“I got some things set up, right now my team is trying to know the rules because there is a lot of things that are new,” Langley said. “We are trying to make sure we are doing the right thing and make sure I keep my eligibility intact.”

The starting point guard believes this year will be an interesting one with the new rules. There could be some downsides with some athletes not being fully aware of the rules. Players in the past like James Wiseman had their college careers ruined due to money being involved. If players aren’t smart, things could get out of hand.

Langley believes teams prior such as the Fab Five missed out on making a lot of money. Players like Zion Williamson (Duke 2018) and Anthony Davis (Kentucky 2012) could have made a fortune during their one-year stint in college.

However, Langley has one goal in mind entering his last season as an Aggie. That goal is to win the Big South conference and then to make it to the NCAA Tournament. The past two years the Men’s Aggie Basketball team got their tournament run cut short due to COVID-19. This year they look forward to redemption.

“My personal goal would be the same as the team goal which is to win the Big South Championship and make it to the NCAA tournament. I think that is one thing missing from my collegiate career and that’s the reason I came back because these past two years we haven’t had the chance to compete,” Langley said.

Switching from the MEAC to the Big South conference means less competition with other HBCUs. One thing Langley will miss the most about the MEAC is the competitive spirit each school had for one another.

“Definitely going to all of the HBCUs, that HBCU experience will be missed,” Langley said. “Being in the MEAC, going to FAMU and Bethune-Cookman, they got tough crowds, just playing in that atmosphere was fun.”

This team will be filled with new faces from different places. With staple players like Tyrone Lyons, Fred Cleveland, and Kwe Parker all leaving, there will be a need for others to take a bigger role for the Aggies to succeed. Nevertheless, Langley is optimistic and confident in the group of guys around him this year.

“It’s hard to fill that void that those three guys left for us but I think this year we have a good group of guys and talent, hopefully, we can do something with it,” Langley said.

Langley has one final statement that he would like for Aggie Nation to hear!

“Everyone come out to the games, this year we got a great team with great talent so hopefully we can have your support.”