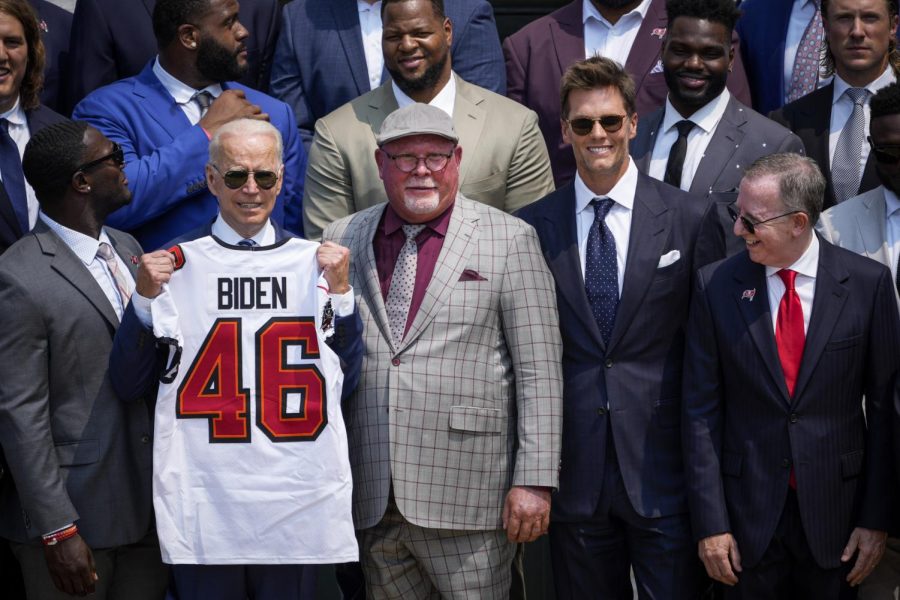 The Tampa Buccaneers are set to start their 46th season as an official franchise, but they wanted to ensure they made a visit to deliver a No. 46 jersey to the 46th President of the United States, President Joe Biden.

On Tuesday morning, the recent Super Bowl champions granted President Biden’s request to formally congratulate them. The team arranged themselves on the left and right sides of the staircases facing the White House’s South Lawn and proceeded to position themselves behind the famous Vince Lombardi trophy. But, there was no Tom Brady insight.

The audience began to look around and small whispers began to break out about if the seven-time champion quarterback and ESPY Male Athlete of the Year would be in attendance. Then in true superstar form, the quarterback appeared with blacked-out aviator sunglasses matching the president and a wide grin along with the Buccaneers head coach and owner.

Brady has declined several presidential invitations in the past, but the series of rejections came as a surprise to fans because of Brady’s history of friendship with President Biden’s predecessor, President Donald J. Trump. In 2015, Brady declined President Barack Obama’s invitation to have a formal celebration. There was also a slight halt put on team visits due to COVID-19. However, the accomplished quarterback has come out victorious in a Super Bowl under four different administrations.

“I called him (Chris Godwin) before the game and gave him some tips on how to run some patterns,” President Biden said.

Godwin and President Biden both share native roots in the city of Delaware and Pennsylvania.

“But, you know, born in Pennsylvania, raised in Delaware, where I come from, that’s a heck of a combination,” President Biden said. “Just like me, I know Chris takes a lot of pride in his hometown of Delaware. Chris, you are inspiring a lot of kids back in Delaware.”

The Buccaneers’ visit was filled with light-hearted energy. President Biden commented on age not being a factor when considering if someone can get the job done.

“As far as I’m concerned, there’s nothing wrong with being the oldest guy to make it to the mountaintop,” President Biden said. “That’s how I look at it.”

President Biden is the oldest U.S. president at 78 years old and Brady at the age of 43 is the oldest quarterback to land a Super Bowl victory.

“Not a lot of people think we could have won,” Brady said. “I think about 40% of people still do not think we won.”

President Biden and Brady shared a laugh over this comment due to the American people’s mixed comments about how the election was run and the long-awaited vote count. Brady also made a joke about a moment in his career that didn’t put him in the best light.

“We had a game in Chicago and I forgot what down it was,” Brady said. “I forgot one down in twenty-one years of playing and they started calling me Sleepy Tom. Why would they do that to me?”

In a more serious tone, President Biden took the champions’ visit as an opportunity to urge the nation to get their COVID-19 vaccine if they have not already.

“Your stadium also became a lifeline for families in Tampa Bay this spring, administering nearly 200, 000 vaccine shots,’ President Biden said. “And y’all who don’t have a shot, get one, OK? Get one.”

“So, you know we’re on the eve of football season, ” Brady said. “We start practice tomorrow and we’re going to do everything we can to work and achieve another one of those Lombardi trophies. It’s a different group of men and it’s going to be a different challenge, but we’re excited about it, for the chance to come out and compete and show everyone what we’re made of.”

NFL training camps are set to begin as early as July 24, 2021. The Steelers and the Cowboys headline the Hall of Game on Aug. 5 which will begin the NFL Preseason.