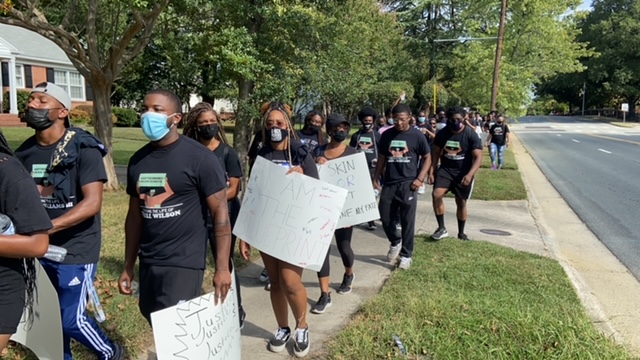 Under new student leadership and increased involvement, The Village Mentoring Inc. hosted their second annual Ahmaud Arbery Community walk to honor the lives of African-Americans that were lost to police brutality.

This past weekend, the community walk was led by two student team leads, Kajuan Durer, a sophomore journalism and mass communication student, and Joshua Taylor, a sophomore double major student in business management and finance.

“ We definitely had to get an idea of the outcome we wanted to get from this event,” Taylor said. “We [Taylor and Durer] brainstormed and our committee to get different perspectives of how to bring this idea to life.”

Many student organizations were present at the walk, in particular SGA. The SGA Freshman council and SGA president Verdant Julius attended the walk. Julius spoke in front of the A&T Four statue and spoke on N.C.A&T’s history in activism and how students should continue to be inspired by the A&T Four.

“Throughout the history of A&T, we always played a significant role in the freedom struggle for black people,” Julius said. As we’re standing on the grounds of the A&T Four, we must understand that their actions, words, and spirit live through us.”

After Julius’ speech, water bottles and t-shirts were handed out to participants. Students, parents and children from the Greensboro community walked a little over a mile from East Market to South Elm Street.

On East Market Street, the participants were led by The Village Mentoring’s President, Rodricus Neely, a senior chemical engineer student. On their way to the International Civil Rights Center & Museum, Neely taught the crowd several chants like “Black Lives Matter” to bring awareness to African-Americans that were lost to police brutality.

For three years, Neely has given his time to the Village Mentoring and explains why he continues to be involved.

“ I was a mentee at one time, someone showed me the way, so I decided to pour back into something that was poured into me,” Neely said.

Once participants arrived at the International Civil Rights Center & Museum, Taylor and Durer introduced last year’s guest speaker, Charles Bess, the only African-American dishwasher at Woolworth’s Lunch Counter who was present during the second day of the Greensboro sit-in.

The second day of the Greensboro sit-in, Feb. 2, 1960, is when Joseph Mcneil, Franklin McCain, Billy Smith, and Clarence Henderson sat at the “whites-only” lunch counter.

After Bess was introduced to the crowd, a Q&A session was held for people to ask him about his experience. Closing the event, Durer and Taylor added a new aspect to the annual community walk by giving participants an assignment.

“ We did not want to copy it [community walk] fully… we have these name tags and we’re going to share what they mean at the end,” Durer said. “ It’s a demonstration we incorporated at the end that we think a lot of people will really like.”

Durer and Taylor told the crowd to research the name tags that were given to them at the beginning of the walk. The Village Mentoring gave out name tags that have different names of African-Americans that were victims of police brutality.

Many of the students involved enjoyed their time volunteering. Chaniah Brown, a sophomore political science student, felt prideful because of the amount of Aggie students in attendance.

“I really feel very prideful because there are a lot of Aggies out here supporting Ahmaud Arbery even though he’s not here,” Brown said. “We want to give black people dignity in their death, which they don’t get, but we’re giving it to him as we’re walking and spreading his message in his name.”