The Legacy of Manny Pacquiao and life after boxing 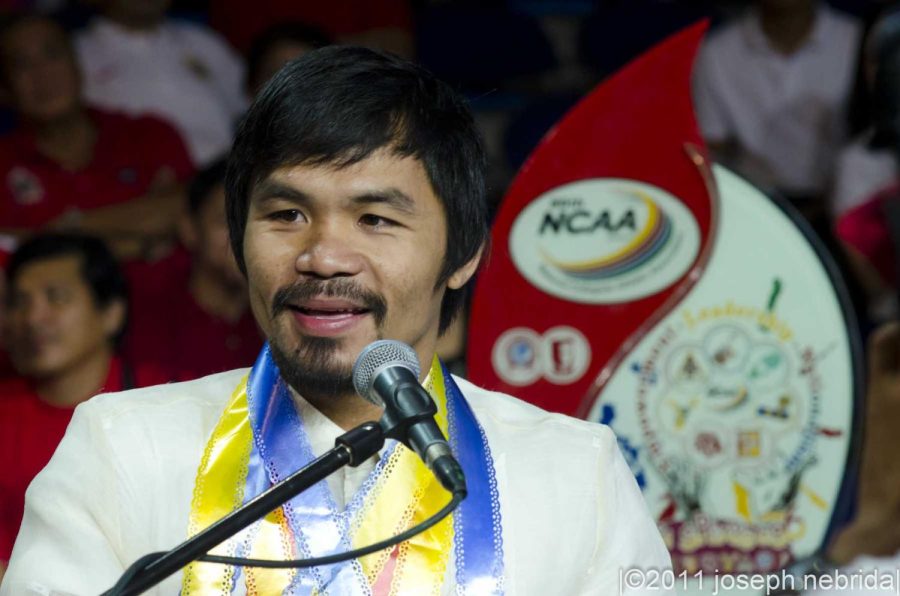 Manny Pacquiao announced his retirement from boxing late last month after a 26 year career. The Philippines native newfound political career ultimately led to him hanging up the gloves.

Pacquiao won his first major championship in 1998, when he defeated Chatchai Sasakul of Thailand. Since then, he has been a force being named “Fighter of the Decade” for the 2000s by the Boxing Writers Association of America.   He is the only boxer to hold world championships across four different decades.

PacMan hit the spotlight in 2015, when it was announced that he would be fighting the undefeated Floyd Mayweather. This fight brought worldwide attention to Pacquiao, as this fight was deemed the “Fight of the Century.” Unfortunately, the fight did not go Pacquiao’s way.

“I thought I won the fight. He [Mayweather] didn’t do nothing,” Pacquiao stated during the post-fight press conference.

Mayweather defeated Pacquaio after a 12-round fight. Mayweather remained undefeated and Paquiao’s record dropped to 57-6-2. Despite the loss, Pacquaio continued to train and find peace in other facets of life.

The boxing ring is not the only place Pacquiao spends his time. The star athlete is also a politician, as he has been senator of the Philippines for the past five years.

His first attempt at politics was in 2007 when he ran for a seat in the House of Representatives, however, he was defeated and did not run again until 2009 to become the Sarangani province representative. This election he won in a landslide. His popularity led him to win a seat as senator in 2016.

“I can focus and discipline myself, the way I did in boxing, to help the nation,” Pacquiao said shortly after he was elected.

Although Manny Pacquiao is admired worldwide, it is his own community that he has made proud the most. Pacquiao has given Filipinos a level of representation that is not very common.

Despite being the second largest Asian group in the United States, Filipinos are rarely seen as main characters on TV shows or in films, but Pacquiao had the ability to bring attention to his community.

Unfortunately, the Philippines is a country plagued with poverty and violence, which Pacquiao himself also dealt with. For other Filipinos who grew up like Pacquiao, seeing his success is extremely inspiring and shows why he is so loved by his community.

“My family had nothing, so when I was seven or eight years old my mind was already matured to make money, to find food,” Pacquiao told the Los Angeles Times. “There were some days when we had just one meal. There were many when we had none.”

The love from his community is not one-sided, Pacquiao is a philanthropist and is constantly giving back to his hometown. A lot of the money he wins from fighting, he uses to help those less fortunate. In 2018, he used his earnings to fund the building of 1,000 houses in Sarangani.

“You gave me the chance to fight my way out of poverty,” Pacquiao said in his goodbye video on Facebook. “Because of you, I have been given the courage to change more lives.”

At 42, Manny Pacquiao has decided to call it a career. Many are saddened to see Pacquiao leave the sport, but he is not done working yet. Pacquiao announced that he is running for president of the Philippines in 2022.