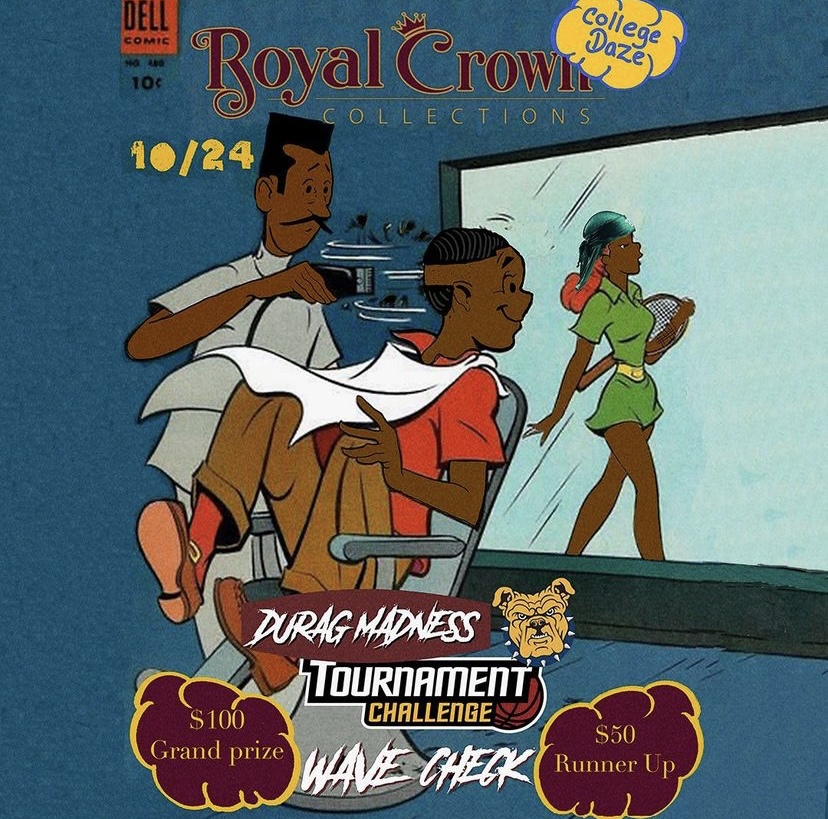 “ Three years ago, we had a wave check, one of my line brothers of Kappa Alpha Psi, Marcus Gray, orchestrated durag day,” Rivers said.

Durag day is special to Rivers because of the Tignon law from the 18th century created by Spanish Governor of Louisiana Esteban Rodríguez Miró. Black women were forced to cover their hair with a tignon [headscarf] because other people saw their hair as a distraction or tried to lessen their appearance.

However, Black women were able to dress up their headscarves with jewels and other decorative material, defeating the original intent of the Tignon law.

“I officially launched my brand [Royal Crown] this year, January 25,  I really enjoy how we can make this [head coverings] a  hair accessory. They [society] think like streets and negative connotations, but my message is that it’s [head coverings] a hair  accessory and this is something that we do for us.”

CollegeDaze, an anonymous student entity, has gained traction since the beginning of the fall semester. The group creates content from relevant graphic content , limited graphic t-shirts and hosts limited-time events. As a result, their limited availability is what keeps students engaged in their content. Their most recent graphic displays Howard University students protesting and asking their followers to support the movement by donating money to the movement’s cashapp, $thelivemovement.

Since the pandemic, a lot of students missed out on the traditional college experiences that occur on-campus. CollegeDaze wants to get back to the era of making N.C. A&T a fun place and promoting fellowship among students.

CollegeDaze reached out to Rivers to create a fun and relaxed environment. Their goal is to have people enjoy each other’s company but carry the ‘wave check’ tradition across all HBCUs.

“ To me, the significance of waves is the bond, you get to compare your waves with someone else. There’s a culture to it, it’s like having a different protective style like braids and sew-ins,” Myles Matthews, senior mechanical engineering student said.

Videographers from both brands will be showcasing the event, In the meantime, people will be listening to music and being the jury of the best ‘wavers’ on-campus.

As far as criteria, the winner is chosen based on the crowd’s reaction but also other  characteristics such as the height, depth, thickness of a wave and crown of the neck

“It is based off of the crowd’s reaction, as general criteria, you want to look at the depth of the wave, the height,  how thick is the wave, if it’s a certain pattern, some patterns are harder than others, how’s your crown,  which is the back of your hair, people tend to mess that up,”  Matthews said.

Overall, both partners look forward to seeing a huge turnout from the durag tournament. As for future endeavors of Royal Crown Collections, Rivers want to expand his business into a well-known beauty brand that is bigger than bonnets and durags but offers hair products.

“ As time progresses, I am going to release more haircare products, and do bonnets, durags, shower bonnets, there is so much I want to do,” Rivers said. “ When you see a ‘Nike’ sweatshirt or sweatsuit, you think of everything associated with it. When people see my brand, I want them to see everything that associates with it”

The grand prize winner is awarded $100 and the runner-up receives $50, sponsored by Royal Crown Collections. In order to participate in the competition, participants must wear a durag to the tournament. The tournament takes place this Sunday, Oct. 24, at 2 p.m. The location of the event is disclosed on Royal Crown Collections’ Instagram page and CollegeDaze’s Twitter.

“ Look out for the pink lemonade stand” from B-loved  and Saint.