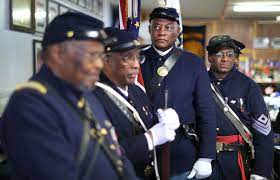 According to History.com, on November 11, 2021, the United States of America will recognize the “eleventh hour of the eleventh day of the eleventh month”.  In 1919, this day was known as “Armistice Day”, the day World War I concluded. Not even a decade later, Congress passed a resolution to recognize Armistice Day annually. Then in 1938, Armistice Day became a national holiday.

Today, we famously know this day as Veteran’s Day. It is a day dedicated to honoring and acknowledging the valiant soldiers who have fought and who continue to fight for American freedom.

It is not a secret that America has many flaws. One of which includes the notorious history of inequity. Let it be known that the role of a U.S. veteran is not to uphold inequity. Rather, their role requires that they do the exact opposite, uphold equity and justice. According to the Merriam Webster Dictionary, equity is defined as justice according to natural law or right.

If veterans did not fight for American freedom, Americans would not have the luxury to live as comfortably as we do. While our lives are not all perfect, the quality of life that we do have exists only because of the fact that there are selfless individuals who risk their lives and fight. Can you imagine your imperfect life without selfless Americans risking their lives to fight for you? It is hard to imagine, but they fight so that we do not have to ponder that idea.

The important idea to recognize is, veterans who fought and who fight today, for American freedom, did so, so that equity and justice could be possible. They fight so that you don’t have to. The hope is that you realize that imperfections in our country do not mean that there is a lack of effort to correct or even fight for them because there is. The men and women who fight are Americans just like us Aggies, and wish to see a better country. This is why it is important that we recognize and honor our veterans everyday, but  especially on Veteran’s Day.

Do We Agree Aggies?

As student-leaders on campus and off, it is important that we recognize heroic efforts to fight for what is right because as Aggies, we not only plan and talk about change, we engage and make it happen because Aggies Do!

I spoke with a couple student-leaders on A&T’s campus and they agreed that Veterans are worth acknowledging on their recognized day, and everyday.

One of the Aggie student-leaders I spoke to was, Aneya Cornwall, Sophomore, Social Work (Pre-Med) student, and Student University Activities Board Intern.

Cornwall comes from a military family and says, “ Veterans Day is important to me because I understand what those families who have lost members can go through”. It is because of her experience and love for her family that she honors the day. “At any time, I could lose my dad, and he serves his country proudly without caring what anyone has to say about it. I love him and I respect the day” Cornwall said.

She also addressed the uneasiness of many Americans, particularly black Americans who are aware of the history of inequity in the United States.

Cornwall noted, “I found myself questioning my dad about his involvement in the military for a country that was built by us [Black Americans] without any sense of respect. I also found myself questioning how we can serve as a military family despite some of the racism that is still alive in the profession today.” She recognizes the tension and has identified the fact that there is effort to be made on her part to rise above the imperfections of the U.S. to still serve the country for the sake of equity.

Lastly, Cornwall recognizes that  individual people who serve our country can have varied interests from the entire body of people who fight for the country. “You can not judge a person involved in the profession based on personal generalizations or feelings about the profession as a whole” Cornwall said.

The other student-leader I heard from was Brandon Taylor, Senior, Supply Chain Management student. Taylor’s father is a veteran and he is appreciative of the fact that America takes a day, “to honor those who have fought for our country and have paid prices for our freedom whether it’s death, mental health issues, or physical deformities” Taylor said. He acknowledges the trade-off American soldiers barter for our protection.

Imagine trading your life, or the quality of your life so that someone else can experience freedom.

Of the most extreme prices Taylor mentioned, death is the most saddening, however, watching a loved one suffer with mental health and/or physical deformities as a result of combat is difficult for any family to witness.

According to the National Council for Mental Well-Being, “30 percent of active duty and reserve military personnel deployed in Iraq and Afghanistan have a mental health condition requiring treatment – approximately 730,000 men and women, with many experiencing post-traumatic stress disorder (PTSD) and major depression.”

We Need to Do More

Taylor mentioned, “There is a lot of hypocrisy around supporting Veterans. I feel a lot of times we say with our mouths how appreciative and supportive we are of them, but on paper when it comes to veteran issues, there’s little support to show for it. I can admit, I am no exception.” As a student-leader, Brandon recognized that there is a need for us to do more. “Us” including Americans, Aggies, and whoever else that benefits from their service. He made no hesitation to recognize the ‘plank in his own eye’ to faithfully address and bring to light an issue that is significant to us all.

We recognize here that veterans should not only be celebrated on Veterans Day but everyday, as they are in need of protection too.

There you have it. Aggies do care about Veterans. We acknowledge Veterans Day, not as an announcement, but a reminder that veterans are an important part of us and are important to us.