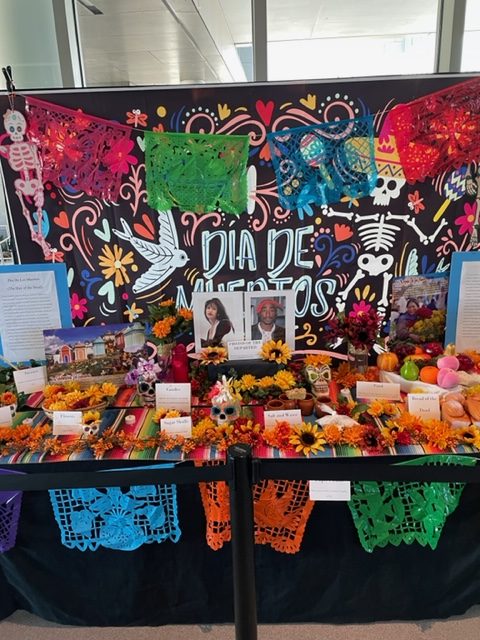 Majority of Americans recognized Day of the Dead by the extravagantly decorated skulls and face paintings but aren’t aware of the true meaning behind it.

Day of the Dead is an important holiday celebrated by those of Mexican heritage. Despite falling on similar dates, this holiday cannot be mistaken for Halloween. Many use this three-day holiday to honor family members and friends who have passed on. From Oct. 31 to Nov. 2, people pay tribute to the gift of life, rather than mourning the tragedy of death. Historically, this day is seen as an opportunity for the dead and living to reconnect.

Although this holiday came from Mexico, many other areas take part in Day of the Dead activities. Several Latin countries such as Columbia, Peru, and Honduras have different methods of taking part in the celebrations.

Traditionally, Day of the Dead is celebrated with lavish festivals, marigold flowers as well as cooking and further celebration. Families often pay respect to the deceased by placing various items on the gravesite and telling stories of said person.

One significant portion of celebration is the creation of an altar. Altars are created to honor the deceased and feature countless decorations. Altars can often be seen with pictures, lights, candles and crosses to pay tribute to the departed.

Located on the first floor lobby of the student center, is an altar celebrating the occasion.

The altar recognizes the life of singer Selena Quintanilla-Perez and rapper Tupac Shakur by showcasing their images as photos of the departed. Both artists unexpectedly lost their lives at very early stages in their careers. Surrounding their portraits are different “ofrendas” or offerings that symbolize important features of Day of the Dead. Throughout the altar you can find:

Marigold flowers: These specific flowers are more than just an aesthetically pleasing touch. Many believe that its beauty attracts souls to the altar. It also symbolizes the beauty of life.
Candles: The light ignites the path for spirits to come to their altar.
Sugar Skulls: These painted skulls represent the soul that the specific altar is created for.
Food: Specific food items such as bread, tamales and fruit are placed on an altar to attract the spirit and for them to enjoy. It is common to place specific items that the deceased may have enjoyed.
Incense: The scent is said to guide the spirit back to its altar.
Salt/Water: The salt gives strength to the soul and water replenishes the spirit if it is thirsty after its journey. Both represent life.

Amongst the offerings are notes educating the public about the meaning of this holiday as well as giving more insight on the importance of each item.

Students at N.C A&T applaud the efforts put in place to recognize and include other cultures on campus. Mikayla McDaniel, junior marketing student, believes that this representation is much needed.

“I think it’s good to have representation of other minorities on this campus, so it was nice seeing that,” McDaniel said.

Others agree with this statement and hope it paves the way for more exhibits that display cultural diversity. Leigh-Ashley Pettiway, junior biology/pre-med student supports the display and hopes to see more. “Being an HBCU it is nice to include the Latin culture and I hope we do the Chinese New Year and other things like that,” Pettiway said.

Students can view the Día de los Muertos exhibit from Nov. 1 to Nov. 12.

Check out the most recent cultural exhibit, also located in the student center lobby, dedicated to the religious celebration, “Las Posadas.”