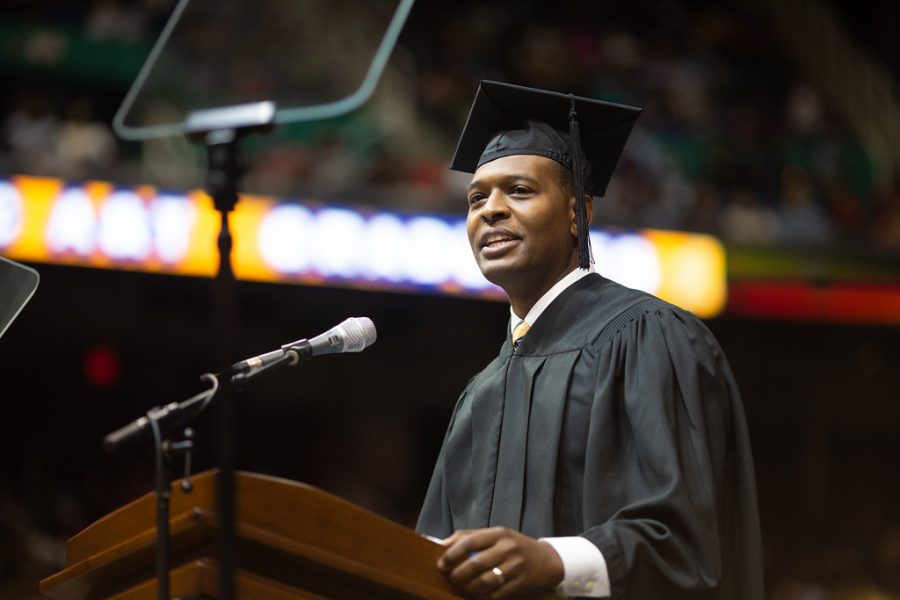 Michael Regan, the 16th Administrator of the Environmental Protection Agency, delivered the commencement speech to graduating aggies for the December 2021 Graduation.

Regan was a part of the 1998 graduating class at N.C. A&T. He graduated with a Bachelor in Science degree in earth and environmental science.

I had the privilege to sit down and talk with him after the ceremony and he was proud to see many environmental graduates walk across the stage.

Regan was in the same shoes as those same graduates 23 years ago and although he might be in the highest environmental position in government, he still vividly remembers what it was like getting that degree.

“When I was sitting in that chair in 1998, I had no idea what was possible,” Regan continued. “Those individuals have the biggest and brightest opportunity ahead of them and I am so excited for them. They have no idea what life has in store for them.”

Taking on a position like that straight out of college was a “wake-up call” Regan described it. However, he was not flustered because he felt prepared after spending four years at N.C. A&T.

Not only is Regan the Administrator for the EPA but he is the 1st black man to be in this position. Regan knows that with this position comes a lot of responsibility, but nothing he can’t handle.

Regan remembers when he found out that he was selected for the position like it was yesterday. Although he was packed with many different emotions, he knew this was just the beginning of his new journey.

“It was an overwhelming experience and an awesome feeling. First, one of exhilaration and excitement because of what we can do and what I can do in the position. Secondly, a level of humility and understanding that I am the first black man in this position and the accountability and responsibility I have in this position to set the best example,” Regan said.

Regan talked about how the culture at N.C. A&T made him a better student and credits the school for helping him get to where he is today.

“The academic rigor and discipline, but also being in an environment that was comfortable culturally. To look around and see professors, students and alumni that look like you is really important,” Regan said. “So in that comfortable setting I was able to absorb a lot more in the classroom setting and walk away with a culturally rich experience. It had a lot to do with where I am today.”

The EPA released a new recycling plan earlier in November of this year to tackle recycling challenges, climate change and legacy waste issues. Chancellor Martin and Administrator Regan both believe the students on campus can help towards this plan.

“I was talking to the Chancellor about it just last night and he has a number of excited students approaching him about a recycling plan. The sky’s the limit. I think our younger audience is more educated about recycling. We need just need to set up the proper infrastructure so that people can participate,” Regan said.

Regan has this final message for the recent graduates and what’s next for their future after college.

“I would tell every graduate don’t take no for an answer. There’s going to be enough people telling you no, just stay focused, and if it’s a passion or dream, you all are well prepared to take on the world,” Regan said.